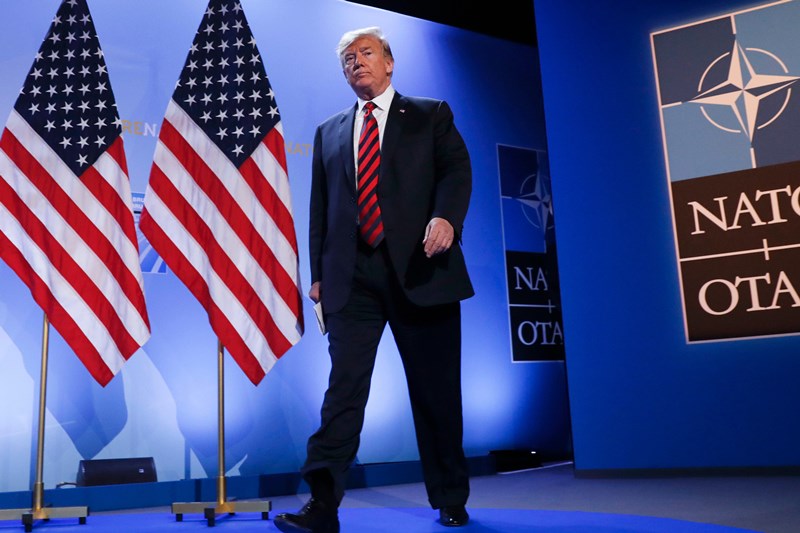 The NATO Summit Declaration was issued on the first day, and there was nothing surprising in it; the surprises came later. Trump has been chiding European countries for not contributing enough money for their defense since his 2016 election campaign, but at the NATO summit in Brussels on the 11th and 12th of July, he raised the temperature to boiling point. On the first day of the NATO summit, Trump said: “We are protecting Germany, we are protecting France, we are protecting all of these countries and then … Germany is totally controlled by Russia because they will be getting 60-70% of their energy from Russia and a new pipeline. You tell me if that’s appropriate because I think it’s not. On top of that Germany is just paying just a little bit over 1% whereas the United States is paying 4.2% of a much larger GDP.”

However, what happened on the first day of the summit was nothing compared to the second day. An hour before the meeting, he tweeted, “All NATO Nations must meet their 2% commitment, and that must ultimately go to 4%!”Trump came late, with a new surprise agenda, and he barged forward to point his finger at the German Chancellor, who he addressed rudely as: “you, Angela – you need to do something about this!” As a result, the day’s agenda was torn up, meetings were cancelled and an emergency ‘closed session’ was convened without the press, and without prominent NATO partners. Afterwards, most leaders left in a hurry and cancelled previously scheduled press conferences, except for Trump, who boasted of victory: “It all came together at the end.” Some of what was said in the closed meeting became known to the press, and it was shocking: Trump “said they must raise spending by January 2019 or the United States would go it alone,” and his answer to a reporter about pulling out of NATO without the approval of Congress was: “I think I can.”

Why is Trump bullying US allies in Europe? US Senator, John McCain, said that Trump’s behavior was: “disappointing, yet unsurprising… they are the words of one man. Americans and their Congress still believe in the transatlantic alliance.” John Kerry, a former US secretary of state, said Trump’s comments about Germany were: “disgraceful, destructive and counter to US interests.” Trump is accused of being rude, but the fact that his Party and a faction of the big capitalists in the US backed him for President indicates a purpose.

Trump’s verbal assaults on European leaders are not for the sake of simply increasing defense spending. The Europeans already agreed to increase spending, and Trump’s claims that the US is paying an unfair share are false. The US is targeting the European Union because it is becoming too strong, not because it is too weak. The day before the NATO summit, the European council president, Donald Tusk, sent a message: “Dear America, appreciate your allies. After all you don’t have that many.” This message came after the European Union scored a diplomatic victory in Europe securing increased access to NATO strategic resources. Since the Warsaw meeting in 2016, the EU has been strengthening its role in NATO as a collective body rather than individually as the US wants. This is why Trump is making ever more impossible demands of them, such as suddenly asking them to pay 4% of their GDP after they agreed to pay 2% and to increase spending more quickly, and this is why he undermines and humiliates their leaders.

Earlier, the US targeted the European Union with tariffs and threatened it for not following its policy on Iran. At an EU summit in May, the European council president explained the challenge that Europe faces from the US: “We are witnessing today a new phenomenon: the capricious assertiveness of the American administration. Looking at the latest decisions of President Trump, some could even think, ‘With friends like that, who needs enemies? … I have no doubt that in the new global game, Europe will either be one of the major players, or a pawn. This is the only real alternative. In order to be the subject and not the object of global politics, Europe must be united economically, politically and also militarily like never before. To put it simply: either we are together, or we will not be at all… frankly speaking, Europe should be grateful by President Trump, because thanks to him we have got rid of old illusions.”