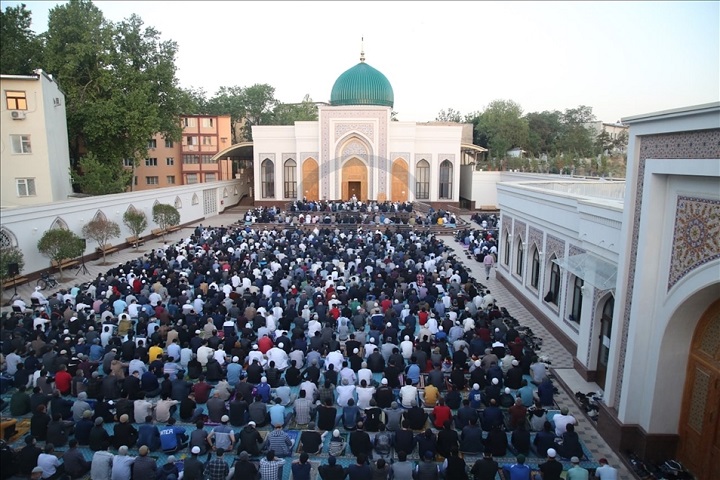 On May 13, news agency nuz.uz reported: “Today, 2.5 million people have performed festive prayer in 2021 mosques throughout Uzbekistan. These figures were reported by the Committee for Religious Affairs. On the day of Ramadan Khayit, 497 thousand believers performed a festive prayer in 106 mosques in Tashkent. In particular, more than 18 thousand Muslims participated in the universal prayer in the Hazrati Imam complex, more than 30 thousand believers – in the Shaikh Zainiddin mosque and about 20 thousand – in the Quddusi Sharif mosque”.

Comment:
For several years in a row, the Committee on Religious Affairs of Uzbekistan has published almost the same figures on the number of Muslims participating in the holiday prayer – Ramazan Bayram. Every year, Tagut of Uzbekistan, from the beginning of the month of Ramadan until the end of fasting, allocates a large number of police officers to watch the mosques of the cities. Young people are not allowed to Friday prayers and Taraweeh evening prayers. They compile lists of all citizens whose children go to the mosque to pray. Children who go to Friday prayers are thrown out of school, and there are many other obstacles to discourage Muslims of Uzbekistan from visiting the House of Allah.

In a country with a population of over 34 million, the vast majority of whom are Muslims, only 13% attended the Eid Prayer!? There are more than 220 mosques in Tashkent, the statement said that prayer was carried out in only 106 mosques, that is, half of the city’s mosques were closed. Well, even so, the statement said that 20 and 30 thousand Muslims participated in the prayer in the large mosques of the city of Tashkent. There are more than 2 thousand mosques in the country, then why only 2.5 million read the Eid Prayer, after all, the President announced these days as holidays and days off?!

Well, the government deliberately prevents the Muslims of the country from visiting mosques, and even to participate in the Eid prayer, not to mention the other duties of Muslims prescribed by Allah Almighty. But the figure of 2.5 million in the holiday prayer is another lie of Tagut of Uzbekistan! The criminal regime of Uzbekistan does not want to show its masters and the whole world how much Muslims of Uzbekistan love Islam and the orders of Allah Almighty. More and more Muslim women in the country, despite the persecution of Tagut, wear chastity clothes and go out into society in Shariah clothes. Young people, despite the obstacles of the authorities, visit the mosques of the cities. Sincere Muslims, not being afraid of oppression and persecution, join the call for the revival of the Islamic way of life in the Righteous State of the Khilafah (Caliphate).

No matter how much Tagut of Uzbekistan, and all similar criminal regimes, have tried to turn Muslims away from Islam using lies, persecution and tyranny, the Prophet Muhammad (saw) and Almighty Allah promised victory and greatness to the Muslims! And in the near future, Muslims will receive the victory, security and prosperity promised by Allah. Allah Almighty said in His Noble Book:

“Allah has promised those of you who believe and do good that He will certainly make them successors in the land, as He did with those before them; and will surely establish for them their faith which He has chosen for them; and will indeed change their fear into security – provided that they worship Me, associating nothing with Me. But whoever disbelieves after this promise, it is they who will be the rebellious” [24:55].