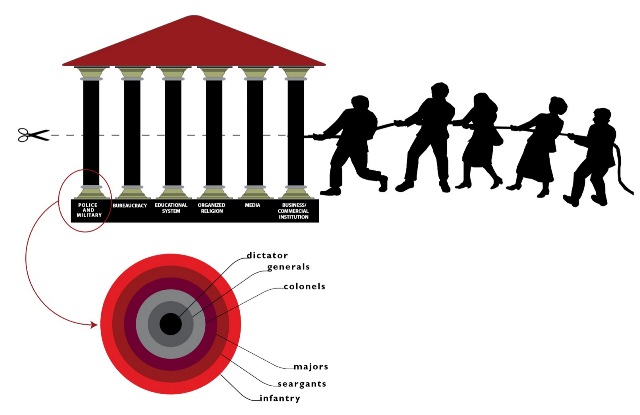 On a primary level, question of talab al-Nussrah (seizing power vis-à-vis those who possess the material capacities to do so) is not to be deliberated on the basis of whether or not we perceive it to be an “optimal” strategy or not. It is a question of whether or not this hukm-Shari’ is binding. More than often, “Islamists” construct their methodology, which they go on to justify with Islamic references, on the optimal and expedient political strategy at hand.

The usulliyun have explained that a particular action of the Prophet (f’il) is a hukm-shari’ when it is related to a legal-verse from the Qur’an (ayaat al-Ahkaam). It is for this reason scholars, in explaining the relationship between the Qur’an and Sunnah, defined the Sunnah as those actions which make the Qur’anic injunctions manifest (tibyaan al-Qur’an). The Prophet’s, peace be upon him, seeking of Nussrah is an explicit example of such. Ibn Hajar al-Asqalani, in his magnum opus Fathi ul-Bari fi Sharh Sahih al-Bukhari narrates, on the authority of Ibn ‘Abbass that ‘Ali ibn Abi Talib stated:لَمَّا أَمَرَ اللَّهُ نَبِيّه أَنْ يَعْرِض نَفْسَه عَلَى قَبَائِل الْعَرَب، خَرَجَ وَأَنَا مِنْهُ وَأَبُو بَكْر إِلَى مِنًى، حَتَّى دَفَعَنَا إِلَى مَجْلِس مِنْ مَجَالِس الْعَرَب “When Allah subhanahu wa ‘talaa ordered the Prophet to approach the Arab tribes, I and Abu Bakr accompanied the Prophet salallahu ‘alaayhee wa-Salam to Mina until the court of the Arab tribes.”

The Prophet ﷺ persisted in this particular action despite the suppression and harm (darar) it wrought. In fact, the Prophet’s persistence on an action which wrought harm is indicative of its obligatory nature (wujub) because one of the five legal maxims of fiqh (al-Qawa’id al-Fiqhiyyah) state that: ad-Darar yuzal (harm is to be removed) if and only if the darar (harm) or difficulty (mashaqa) is not intrinsic to the hukm-shari’ itself (e.g. being wounded during Qital, become thirsty while fasting and so forth). In other words, had the act of seeking nussrah not been an obligation, the Prophet ﷺ would not have persisted in it after it brought about harm.

On this note, the claim that this particular action of the Prophet (talab al-Nussrah) is not legally binding requires from of ‘takhsis’ (specification) i.e. complementary (qar’in) Islamic evidences which renders this action specific to the Prophet ﷺ and/or specific to his epoch. Other criticisms of the Party’s stance on seeking nussrah argue that it is an act which is, not only specific to the Prophet ﷺ, but also specific to the socio-political, cultural and economic epoch of his time. This argument, however, fails to distinguish between the timeless and immutable fact that all societies are based on power-relations on one hand and the ways in which those power-relations were mediated at the time of the Prophet ﷺ on another. To put it differently, the hukm shari’ addresses a fixated reality that is part of all societies, regardless of their time and place, whereas the implementation of the hukm shari’ is context-sensitive.

On a secondary level however, it is important to explain that the Shari’, by virtue of it being the expressed will of the Creator, addresses the reality of man and of society. More specifically, it provides permanent legal-rulings for those permanent features of man and of society. Therefore, the debate over what is “practical” is a debate which cannot be delinked from a debate over what we ought-to do.

The issue of talab al-Nussrah is an example of how the Shari’ addresses a permanent dimension of society: the nature of power. The traditional perspective has been that political power is maintained by a single monolithic pillar. In turn, to take power requires that the pillar-of-power be pushed over – demolished – and a new pillar-of-power erected. However, this perspective fails to recognize the pluralistic nature of power in society i.e. the fact that power is in fact dispersed vis-à-vis pillars of support and not wholly concentrated on a single pillar-of-power. Gene Sharp, a leading scholar on political change defines pillars-of-support as: “institutions and sections of the society that supply the existing regime with sources of power required for maintenance and expansion of its power capacity.” In doing so, this brings to fore a far more dynamic and reality-based definition of political power, which is: the totality of means, influences, and pressures – including authority, rewards, and sanctions – available to achieve the objectives of the power-holder.” From a strategic perspective, this means that those who seek to uproot the ‘State’ must work towards pulling these pillars of support away from the ‘center’ of power and not towards it (e.g. by engaging in insurrectionary action).

It is important, at this point, to understand that there are different functions of power which each pillar exercises distinctively. For example, religious establishments and media outlets have the power to influence whereas the police-force and military have the power to exercise coercive power. In seizing power, we must identify the pillar-of-support which has the both the function and capacity to bring about radical institutional transformation. In the contemporary Arab-Muslim world, this function and capacity has largely been held by the military apparatus. This also means that, while power is dispersed it remains concentrated in one entity more than another. Furthermore, it is not only about the material capacity to institute radical change but also a willingness to do so. It is not sufficient to instigate a coup d’état which maintains or resurrects the very same oppressive system-of-rule which the Party sought to uproot. What is sought is radical change. There are often referred to as “revolutionary coups”[1] such as the anti-Monarchial coups in Egypt (1952), Tunisia (1957), Iraq (1958), Yemen (1962), and so forth. By its very nature, seeking nussrah is predicated on the ability of the co-opted power-elites to undergo a comprehensive ideological transformation which would, in turn, allow them to both (1) use their power to dissolve the prevailing State and subsequently (2) relinquish that power. This cannot occur if the coup d’état is instigated on the basis of material interests. In co-opting elements from the military, a movement is thus able to transform what is often a “conservative guardian of the existing order”[2] to an agent for the dissolution of that order – the strategic implications of which cannot be overstated.

From its inception, Hizb ut Tahrir has explicated these permanent features of society and have identified the difference between “authority” (dependent power) and raw-power (independent power). It has, from the onset, recognized the fact that talab al-Nussrah is the obligatory and optimal means of seizing power. It does not seek to “build power” by presuming that as an Ummah we lack the means-of-power but rather it recognizes a far more fundamentally strategic reality: we lack access to those means-of-power i.e. the militaries and natural resources in the Muslim world. Accordingly, we call upon, and will continue to call upon the sincere people of power in the Muslim world to adopt the call of Hizb ut Tahrir and establish a Caliphate upon the Prophetic methodology.