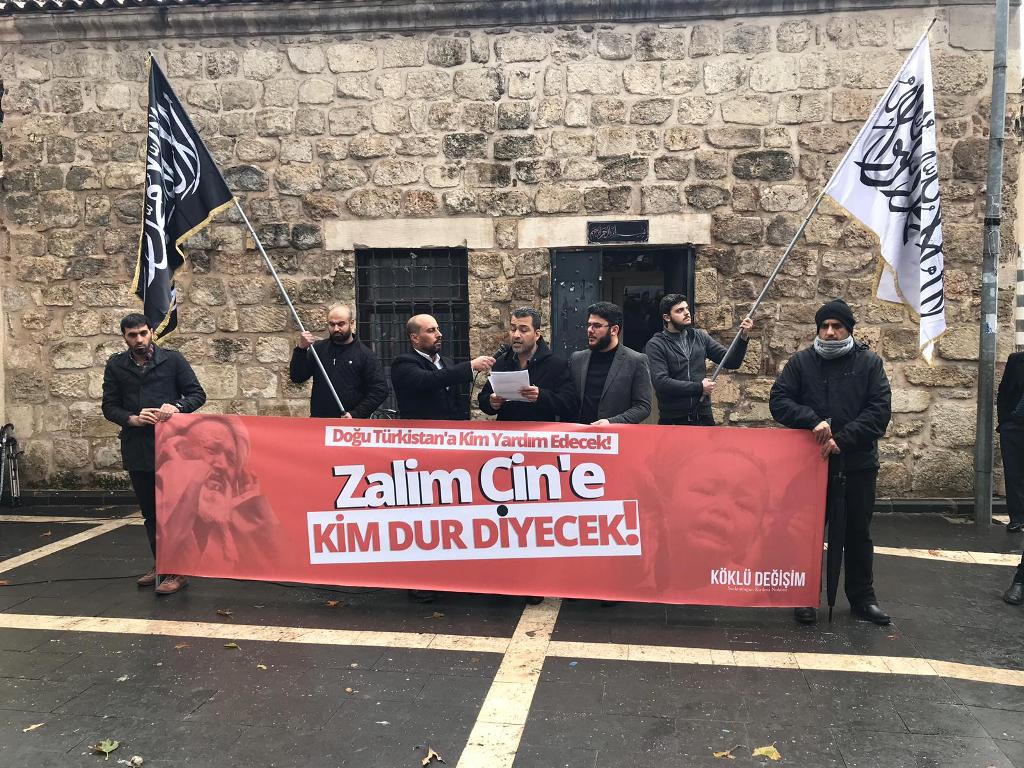 On Friday 13th December after Jumu’ah prayer, Hizb ut Tahrir Wilayah of Turkey organized staged readings of a press release entitled “Who will support East Turkestan… who will say ‘enough’ to the unjust China?!” in front of Malika Khatun Mosque in Ankara, the Chinese Consulate in Istanbul, the Ulu Mosque in Adana, the Al-Sina’a Mosque in Hattay, and the Alu Mosque in Mersin. Crowds from amongst the Muslims and the migrant brothers and sisters from  East Turkestan participated in the events, in which the following matters were emphasized:

Oh Muslims! The Best Nation Ever Risen to Mankind! The moaning of the cries rising from East Turkestan shakes the throne of the Most Merciful, do you not hear? The throne of the Most Merciful is shaken by their appeals, don’t you feel? And your Muslim Uyghur brothers are being killed brutally and mercilessly, don’t you see? They are subjected to torture and injustice that shake every human being, so who will put an end to the oppression of these despotic communist infidels? Who will say ‘enough’ to these grievances? Is it the United Nations who previously handed over the Bosnian Muslims to the Serb butcher?! Are you waiting for help from the United Nations that takes its decisions in occupying Muslim lands in accordance to America’s interests?! By Allah, handing over the destiny of Muslims in East Turkestan to the United Nations, and searching for a solution with it, is but a burning of the rights of Uyghur Muslims, and delegating the East Turkestan issue to the United Nations is nothing but a betrayal of our Muslim brothers.

Oh Rulers in the Muslim Lands! You have erred a lot in the past! You brought your trade above your humanity, pride and honor, and turned your back on your Muslim brothers in fear for your relations with China. The protection of your Muslim Uyghur brothers and saving them from the grievances of China is imposed upon you, so do not turn your back on your brothers the Uyghur immigrants from East Turkestan who have taken refuge in you as their brothers and have taken refuge in Anatolia, which is famous for its mercy.

And you, the occupying infidels of China: let not the silence of the rulers of Muslims deceive you, nor let your large number deceive you, and know that your grievances will not continue until the Day of Resurrection. Soon, by the will of Allah, the Khilafah Rashidah (rightly guided Caliphate) on the method of the Prophethood will rise, and Muslims will gather under one banner, their hearts will unite, their goals will be united; their armies will be united, and it put an end to all oppressors and tyrants like you.

Oh our Muslim brothers in East Turkestan! Hold on to your religion despite all the injustices imposed on you, hold fast onto it, and continue to teach the doctrine of Islam to your children. This faith is your salvation and the salvation of your children and your generations who come after you in this world and on the day of reckoning. Beware of those who do not see your issue as the cause of Islam, and invite you to race and nationalism. And do not forget that the issue of East Turkestan is an Islamic issue, and when Islam is absent, there is no home or country! And Allah, glory be to Him, The Infallible from any impotence, says:

“BEHOLD, We shall indeed succour Our apostles and those who have attained to faith, [both] in this world’s life and on the Day when all the witnesses shall stand up” [Ghafir: 51]