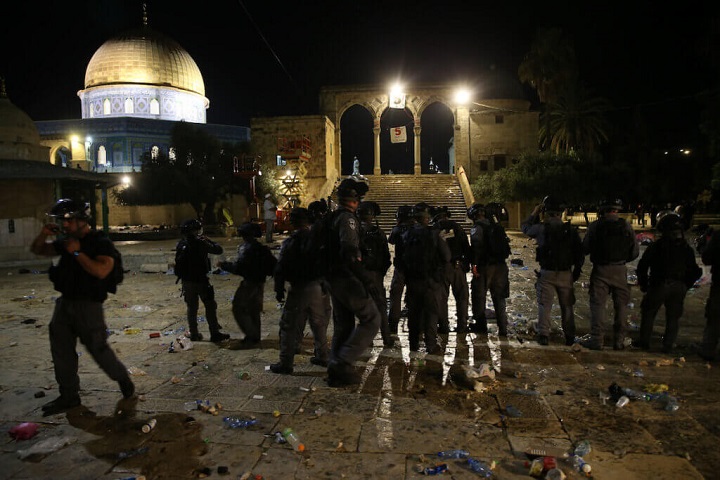 Since the beginning of the month of Ramadan, the usurper’s Jewish entity has worked to spread death in Al-Quds, and its Najis (unclean) hand desecrated the blessed Al-Aqsa Mosque. It set up barriers at its gates, dispersed Iftar tables, and hindered the worship of Muslims. The Jewish entity, which intensified its tyranny on the night of Friday May 7, mobilized thousands of armed soldiers in the square of the Al-Aqsa Mosque, and turned it into a battlefield; 24 of our brothers were martyred in this attack, and more than 500 of them were wounded. The voices of distress arising from Al-Aqsa mosque, that the Throne of the Most Merciful trembles for, were not answered. Muslims in these last days of Ramadan, despite the conditions of the epidemic, rose on their feet and filled the squares, and addressed their calls to the rulers and expressed their grief and shed tears for the sake of the Al-Aqsa Mosque, but the rulers of the Muslims did not respond to the demands of the Ummah, and worked to deal with the issue with weak messages, and they worked again to calm down Muslims with their false reactions, and  Al-Aqsa Mosque and the oppressed Muslims were left alone once again.

We, in Hizb ut Tahrir / Wilayah of Turkey, on Monday, 10/5/2021 organized a press conference in 10 different cities, and called for collective action. Press conferences and protests were organized in front of the consulate of the Jewish entity in Istanbul, the US consulate in Adana, and the squares of the major mosques in the city centers of Ankara, Bursa, Gaziantep, Shanlıurfa, Kahramanmaraş, Hatay, Mersin and Van.

We said in these statements: “We do not blame the usurper Jewish entity, but rather we denounce those who are in deadly silence over these attacks! We denounce those who normalize relations with the Jews, who are the killers of the prophets, and the most hostile to Muslims.” We sent the following message: “The solution of the issue of Al-Quds will not be found in the UN forums, the halls of the League of Arab States or the Organization of Islamic Cooperation. Rather, the fundamental solution to this issue lies in removing the causes that led to its existence, and the radical solution to the Palestine issue lies in uprooting the Jewish entity and expelling it from the blessed Al-Aqsa land; otherwise, other projects of solutions will be futile and unacceptable. The occupation cannot be pushed back by simply reciting the takbiris and prayers from minarets, nor sufficed with prayers in mosques.”

We addressed the rulers in Muslim countries, and we said to them: “How long will you wait for, when your armies are crowded with soldiers who are eager for martyrdom, and your barracks are full of disabled weapons, and your wealth is abundant? And the İHA surveillance and SİHA surveillance drones that you sent to Libya for the sake of America’s interests, when will you send them to Tel Arabe’ “Tel Aviv”?If these drones are not for the sake of liberating Al-Quds, why and for whom are you building them?

We told the usurper’s Jewish entity and its leaders: “We know that you are the most cowardly people on earth, and the most despicable of the people in the world! The silence of the Muslim rulers is what supplies you with this audacity! But don’t be fooled by this! Just as a handful of Palestinian youth broke through your checkpoints and opened the closed door of the Al-Aqsa Mosque, we will go to Al-Aqsa after the establishment of the Khilafah state with the help of Allah, and we will open all the gates of Al-Quds for the Ummah. As for you, you will search for a country to flee to.”

We thank all Muslims who participated in our press conferences, and we ask Allah (swt) to grant them His pleasure. And Al-Quds will be liberated from the hands of the Jews and their supporters as it was liberated from the Crusaders; indeed tomorrow for its onlooker is close. This will certainly be achieved when Allah permits. Allah, the Glorified and Exalted, says:

“And you will surely know [the truth of] its information after a time.” [Sad: 88]