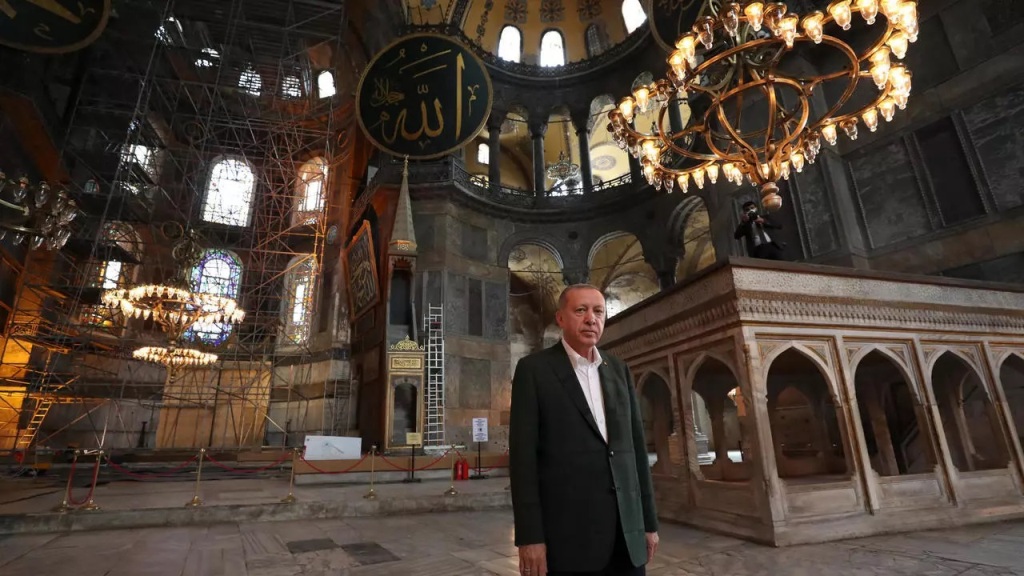 A spokesman for Turkey’s ruling AKP party has said the nation will remain a secular republic after a pro-government magazine issued a call to resurrect the Caliphate. “The Turkish Republic is a democratic and secular state based on the rule of law,” Omer Celik said in a tweet. “Our republic is an umbrella for us all based on these qualities.”

“The Turkish Republic will stand forever. With the prayer and support of our nation, and under the leadership of our president, we are walking towards so-called unattainable goals for our country and humanity. Our republic will continue to shine.” [Alaraby/The New Arab, 27 July 2020]

The AKP official’s tweets came after Gercek Hayat, the weekly magazine of government-linked Yeni Safak newspaper, called on Ankara to re-launch the Khilafah, which was abolished in 1924. The cover of Gercek Hayat’s 27 July issue reads, “Now the Hagia Sophia and Turkey are free, get ready for the caliphate… If not now, then when? If not you, then who?” the cover asks, seemingly referring to Turkish President Recep Tayyip Erdogan. This time, the call for a Khilafah came days after Turkey re-opened the Hagia Sophia as a masjid more than 80 years after its conversion into a museum by the Turkish Republic’s founder, Mustafa Kemal Ataturk (May Allah’s curse be upon him).

We all remembered the occasion of the Hijri Anniversary of the Conquest of Constantinople (city of Heraclius) in the month of Jumada al-Awwal 1441, in which the glad tiding of the noble Hadith of the Messenger ﷺ was achieved by the young hero of the Muslim Ummah Sultan Muhammad al-Fatih (rh). «لَتُفْتَحَنَّ الْقُسْطَنْطِينِيَّةُ فَلَنِعْمَ الْأَمِيرُ أَمِيرُهَا وَلَنِعْمَ الْجَيْشُ ذَلِكَ الْجَيْشُ» “You will open Constantinople, its Amir is the best Amir, and the best army is that army.” Al-Fatih, who was named so after the conquest, decided to take Constantinople as the capital of his state after it was Edirne previously, and he named it Constantinople [Kostantiniyye] after its conquest “Islambol”, meaning the city of Islam [Dar al-Islam], and became famously known as “Istanbul”.

When Muhammad al-Fatih entered the city victoriously, he ordered the conversion of the Church of the Hagia Sophia to a mosque. Hagia Sophia was converted to a masjid because of its dominance in the city and the Prophet ﷺ said «الإسلام يعلو ولا يعلى عليه» “Islam is exalted and there is nothing exalted above it.” (Daraqutni, Al-Bayhaqi, At-Tabarani). The other churches were left for the Christians and Muhammad al-Fatih gave protection to the monks and ordered them to be treated justly. Al-Fatih then prayed in it and it became a masjid with the grace, blessing and praise of Allah… And it remained so, a purified glorious masjid, prospered under the believers, until the criminal of the era, Mustafa Kemal had managed to ban the prayer there and desecrated it when it became a museum for those coming and going!

However, now the Muslims all around the world view Erdogan, president of Turkey, as a Hero of this Ummah for his mere Islamic gestures. This time, by passing the order of conversion of museum to masjid, Erdogan has gained a great momentum amongst the Muslim Ummah particularly amongst the Muslims in turkey. However, we as Muslims should not be deceived by some Islamic gestures of these rulers. It’s all just to win over the elections. Erdogan didn’t represent Islam, he represents Secularism.  This was evident from the response of spokesperson from Erdogan’s AKP party which says Turkey is a secular country and continue to be secular, towards the Gercek Hayat, the weekly magazine of government-linked Yeni Safak Newspaper which called Muslims to revive the Khilafah. Erdogan himself admitted previously in an interview and quoted that “Having a secular state is an important step…secularism means being tolerant to all faiths. The state is neutral in matters of religion and the reality is that the state should have an equal distance from all religious faiths.” [Reuters, 2016]

According to his vison for Turkey, all religions are equal and kept at same distance including Islam. He says, the state should equally reject the political laws arise from these religions. This reveals the true nature of the Erdogan that he didn’t represent Islam rather he represents Secularism and all actions he does regarding the benefit for Muslims are all to win over the elections and come back to power to serve his master America.

We Muslims should realise at this time, who is the real hero? Man who converted the Constantinople, the land of kufr, to Dar ul Islam and converted the symbol of kufr (Orthodox Cathedral) to masjid? Or the one who just converted the Museum which was already been a masjid for more than 400 years and then later converted to museum by the traitor Mustafa Kemal, to masjid, that too with Muslims as majority in the region?

We Muslims should not believe and not have our loyalty towards these traitors, be it Erdogan, Salman, Sisi, Imran Khan etc… The real heroes of our Muslim Ummah are the one who give nusrah (support) for the Implementation of Islam and propagate the message of Islam to the rest of the world as like what Muhammad Al Fatih did.

May Allah (swt) make us of people who fulfil his promise by working for the re-establishment of Khilafah, the tareeqah (method) for the implementation of Islam and propagation of Islam to rest of the worlds.