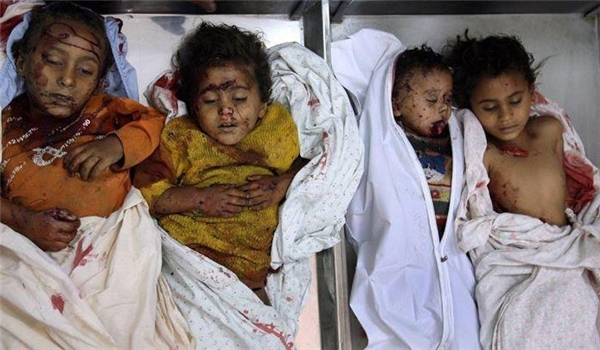 A recent report published by the Food and Agriculture Organization of the United Nations (FOA) announced that there are approximately 11 million people in Yemen facing a severe lack of food security. This includes 4.8 million who face a state of emergency; while more than 1.3 million children are malnourished; one out of every three children under the age of five suffer from acute malnutrition; 850 thousand children are threatened with real famine; and more than seven million do not have access to basic health care, due to the closure of about 600 hospitals and health clinics, caused by shelling or lack of medical supplies and fuel.

A humanitarian disaster is being experienced by Yemen’s children as a result of the repeated and intentional targeting by the Arab Coalition jets, led by Saudi Arabia, and by Houthi militia and their allies loyal to Ali Abdullah Saleh, in a criminal process similar to what took place with the people of the Gaza Strip and southern Lebanon during the aggression of the Jewish entity on them. Human suffering and the catastrophic conditions of Yemen after nearly a year and a half of the escalation of the war has had its toll on all the people of Yemen, with the children being the most affected. The Supreme Council for Motherhood and Childhood reports in Yemen documented the deaths of 1,600 children up until March 2016, and the number of injured topped 2258 cases, also the number of disabilities due to the war reached 1650 boys and girls, while the spread of diseases and epidemics led to the death of 10,000 children due to the complete absence of basic health care.

A war crime is carried out by Saudi Arabia with the complicity of regional and international powers, on the one hand, and gross violations and further crimes on the other, are committed by the Houthi militia, including forces loyal to Saleh. The specter of famine is threatening an entire generation with death, and a deliberate starving of children is taking place in this international armed conflict and internal conflict, where air strikes target local markets and trucks loaded with food, or through the imposition of an actual siege on cities, which prevents the entry of food and medical supplies to the people, as reported by Human Rights Watch.

The educational process was also affected and was completely stopped in 2015. Nearly half of the children who are of school age are not attending school as a result of the targeting of schools at the rate of two attacks on schools per week. Hundreds of schools have been completely destroyed, and hundreds more have been partially destroyed and more than 400 schools have been turned into centers for the displaced. This resulted in 3 million children being deprived of education and the number of dropouts has reached 49%.

The United Nations is raising alarm bells about this war that violated 90% of children’s rights in Yemen, but the great irony is that it has withdrawn the Arab coalition led by Saudi Arabia from the blacklist in its annual report of armed conflict. The UN scandal clearly shows the fragility of these organizations against the powerful forces in the world, and the lack of independence from international policy; it is following the evil global agenda.

Yemen’s children are paying a high price for this war. It cost them their lives and their dreams, which were stolen by the people of the country, the Houthis, and by their bad neighbours, the rulers of Saudi Arabia. The images of Yemeni children’s dead bodies, torn by the missiles of the Saud clan and their allies, and landmines of the Houthis, and their followers, and hypocrisy of the (the international community), and shameful silence of the world Media and the Arab World Media, will remain to haunt and curse everyone.

Prosperous Yemen, became the poorest country in the Arab world after Mauritania, and the percentage of malnourished children is one of the highest in the world.

We in the Women’s Section in the Central Media Office of Hizb ut Tahrir, call on all Muslims to immediately intervene to save the children in Yemen and to criminalize the hand that kills them, and to rise up and remove the Kufr systems and their agents, which destroyed the country and the people. Happiness will return to Yemen and its children, only when governed by the just divine system, the righteous Khilafah (Caliphate) on the method of Prophethood, that will protect the whole Ummah, including its children, women, men, and elders, and will hold accountable each hand that was involved in the shedding of their blood and intensified the killing of children, and it will not forgive their faults even if they cling on to the Kaaba’s cover.