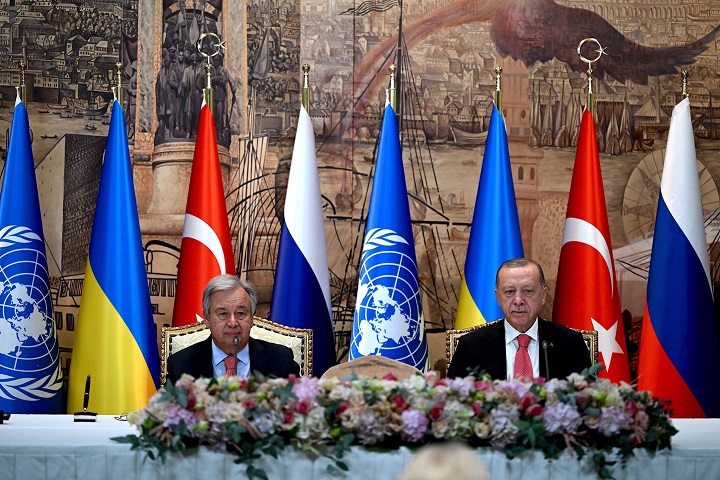 An agreement was signed in Istanbul between Russia and Ukraine through the
mediation of the United Nations (UN) and Turkey for the resumption of grain exports
from Ukrainian ports. The President of Turkey Recep Tayyip Erdogan who held a
speech before signing, evaluated the day of signature of the grain agreement as “a
historic day”, and said that the agreement will contribute to the prevention of
starvation which awaits billions of people all over the world. (VOA Turkish, July 22,
2022)

Comment:
The blockage issue applied by Russia to the ships loaded with grain that were
waiting at Ukrainian ports in reply to the sanctions of the US and European Union,
became temporarily solved by the Grain Corridor Agreement signed through the
mediation of Turkey. According to the agreement, 20 to 25 million tons of grain
blocked in Ukraine could be exported. Russia’s grain and fertilizer export that was
restricted because of the sanctions towards Russia, will be made easier again.
After the agreement, the US being in the first place, the United Nations, NATO,
European Union and Russia expressed their satisfaction and thanked Turkey. And
Turkey brought out the issue in terms of the danger of starvation and human
dimension, and tried to conceal its special political role given by America. Turkey’s so-
called political role, includes being a mediating country that could establish a dialogue
with Russia when there is a development which could interrupt the American plans
and interests in the process of Russia’s invasion of Ukraine. Its interferences on its
political power regarding the grain crisis and the results it has achieved are a clear
indication of Turkey’s role. With his statements “Turkey is ready to play any role it
could in reducing the tension between Russia and Ukraine. We do this as an
ally of Russia and Ukraine, in addition to the fact of being a NATO ally.” (Turkiye
Gazetesi 20.01.2022), the Presidential Spokesperson Ibrahim Kalin had officially
uttered the international role given to Turkey during his speech at a panel held by a
London centred think-tank named Circle Foundation, one month before Russia’s
invasion of Ukraine.

As a matter of fact, with the agreement signed in Istanbul with Turkey’s initiatives,
Russia has been prevented from using the grain issue as a political trump as it has
done in the matter of oil and natural gas.

Although Russia stated that it was pleased with the agreement, it hit the Ukrainian
port of Odessa with cruise missiles a day later, sending a message that it would use
the grain issue as a trump whenever it wanted. How interesting that while the Turkish Ministry of Defense was trying to circumvent the situation by saying Russia doesn’t
accept the attack on the port of Odessa, Russia clearly stated that it carried out the
attack. Because Turkey knows that a failure of the agreement will wherret the
togetherness between America and Europe. And Russia thinks that when the grain
crisis continues, Europe’s economic troubles will increase much more and in this way
it will put pressure on America in the matter of easing the sanctions towards Russia.
Because the inflation which has risen to 9 per cent in the Euro area bothers the
European people. Therefore, by means of the grain crisis, Russia expressed Europe’s
sore points and has shown what it could do. And by means of the agreement signed
in Istanbul, it has removed the sanctions imposed on its own grain, fertilizer and
related products beside Ukrainian grain.

As for America, it has failed to meet its commitments to Europe in exchange for
marching with itself in the Russia-Ukraine war. Because the price of the Russia-
Ukraine war is not paid by the United States, but by the European Union countries,
which are dependent on Russia in the field of energy and food. For this reason,
resolving the grain crisis is important for Europe to continue to move in the US orbit.
However, it is unfortunate that these important interests of the colonist infidel US are
being realized by Turkey by hiding behind humanitarian arguments. However, the
same Turkey did not take any action while the cities where the Syrian people lived
were blockaded by infidel Russia and the Assad regime. Again, Turkey did not play its
vital role today when thousands of Muslims in Syria starved to death because they did
not have access to food. And the help of the United Nations was sending body bags
to the Syrian people.

So, the Grain Corridor Agreement signed in Istanbul is not to protect the people
from the danger of starvation, but to protect the interests of America and the
blasphemous west. Because the states that adopted the capitalist ideology never
think about the humanity. In the world today where they rule, 821 million people are
condemned to starvation. The only thing which is holy to them, is their colonist
interests and corrupt rulership.

And the only state that will treat the human as human and save the world from
artificial crises created by colonist infidels, is the Khilafah Rashidah (rightly guided
Caliphate) State on the method of the Prophethood which is the mark of mercy,
abundance and justice.

“When they are told, ‘Do not spread corruption in the land,” they reply, “We
are only peace-makers!’” [Al-Baqarah: 11]