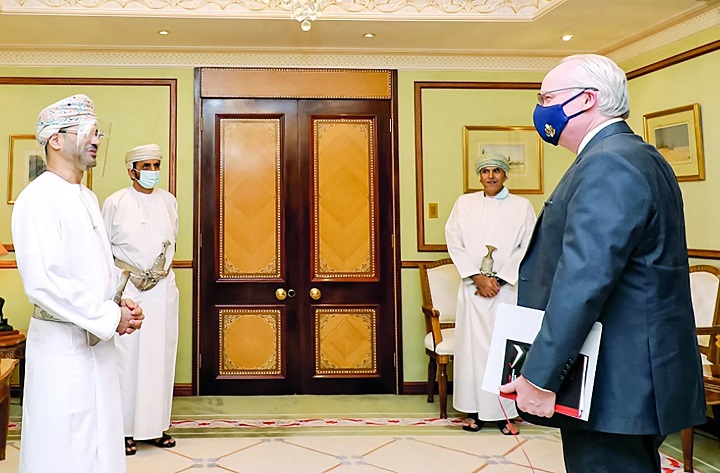 A delegation from Sultanate of Oman visited Sana’a for 5 days starting from 07/06/2021 during which the delegation met with the President of the Supreme Political Council, Mahdi Al-Mashat.

Only one week separated the visit of the Omani delegation and the visit of the UN envoy, Martin Griffiths, who, during his visit to Yemen, carried an initiative to stop the war that has been raging in Yemen since 2014. Griffith’s initiative consisted of four main points confirmed by the visiting Omani delegation, namely: a cease-fire on all fronts, opening Sana’a Airport to all flights outside Yemen, opening the Port of Hodeidah, maintaining the possibility of movement for people, goods and fuel, and the right of access to all areas without being subject to political considerations.

As soon as preparations began for a new round of upcoming talks between the parties to the conflict in Yemen, the Houthis launched a major military, missile and air attack on the city of Marib, which they had long stopped at its entrances, hoping to control it, and go to the negotiating table while they were strong. The European voice rose to stop them from controlling it, as the American voice previously rose and succeeded in stopping the other party from controlling the city of Hodeidah and its port in 2018, and concluded the Sweden agreement.

According to the current data, it does not appear that the Houthis are determined to cease fire any time soon, in order to seize additional gains – to giving them the legitimacy of the rule – or to force the other party to make greater concessions, and they will seek to advance to control the Marib oil fields.

There have been political moves by both sides of the conflict; within four months of his appointment, Timothy Lenderking, the envoy of the new US President Joseph Biden, carried out several works, and Ahmed Awad bin Mubarak, Minister of Foreign Affairs of the government of Maeen Abdul Malik, went to visit Belgium on 10/06/2021. Martin Griffiths, the UN envoy, preceded the US envoy Lenderking, who stayed in Muscat for long periods to bring the ceasefire initiative between the Houthis and Abd Rabbo Hadi into existence in Yemen, and to prepare for a new round of negotiations between them. He visited Tehran twice, and Tehran’s politicians spoke loudly about the ceasefire in Yemen, and its ambassador to Yemen, Hassan Orlo.

There are still people in Yemen and others who insist that the tools of war in Yemen are those who themselves wage war and establish peace! They do not serve but themselves, and they deny the existence of an international conflict over Yemen, between Britain and America, while they are the ones who are destroying it, exposing its people to all kinds of woes and destruction, which have moved from land to sea, in the absence of the one who takes care of the people of Iman and wisdom, under the rulings of Islam. The Khilafah Rashidah (rightly guided Caliphate) on the Method of Prophethood is their goal and aspiration. The Messenger of Allah (saw) said:

“Then there will be Khilafah according to the method of Prophethood.”

Hizb ut Tahrir, the frontrunner that does not lie to its people is working eagerly to establish the Khilafah Rashidah state on the Method of Prophethood, to achieve succession and to achieve Allah’s (swt) promise and the glad tiding of His Prophet (saw).