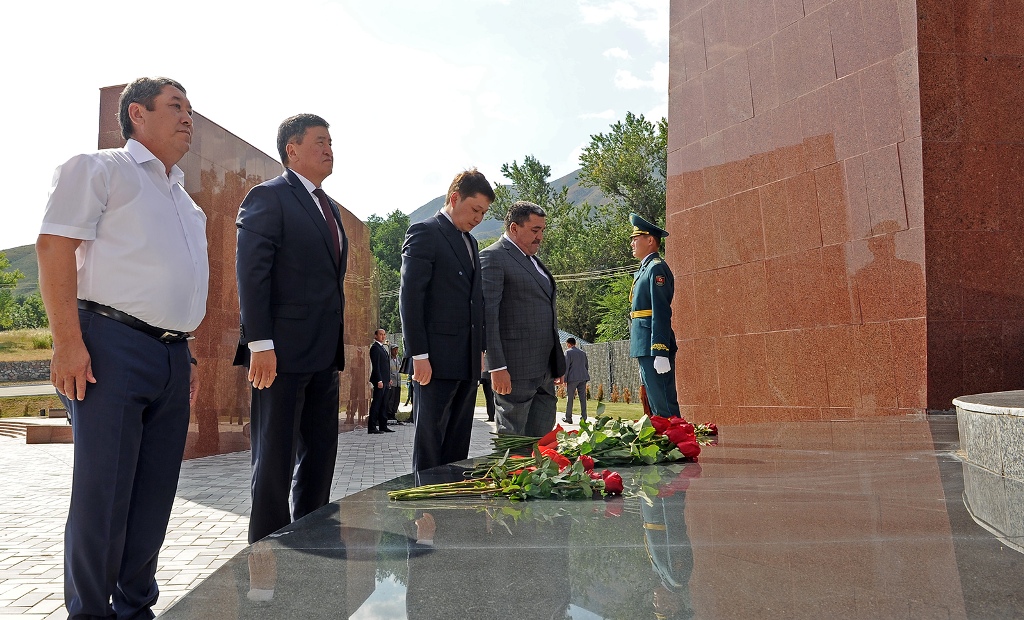 On April 9, the Kyrgyz service of Radio Liberty reported: “On April 7, 2010, a revolution occurred in Kyrgyzstan, which resulted in the removal of President Kurmanbek Bakiyev and his confidants.

The representatives of the country’s leadership headed by President Sooronbay Jeenbekov, as well as ex-President Roza Otunbayeva visited the Ata-Beyit memorial complex, where they honored the memory of those killed in those events.

The event dedicated to the memory of the victims was held in Bishkek and in front of the Media Forum building, which is the headquarters of the Social Democratic Party of Kyrgyzstan. At this meeting, former President Almazbek Atambayev criticized the authorities.

As a result of this meeting, a resolution was adopted and a number of requirements were put forward to the country’s leadership. In particular, it was announced that another similar rally would be organized in two months, and in case of non-compliance with the requirements, larger scale events would take place. ”

Kyrgyzstan with its modern borders was formed after the revolution of 1917 in Russia, then the Kyrgyz Soviet Socialist Republic within the USSR. After the collapse of the USSR, in 1991, Kyrgyzstan declared a formal “independence” from Moscow, and Askar Akayev became the first president of Kyrgyzstan.

The rule of A. Akaev, in contrast to the neighbors, the rulers of the tyrants of Central Asia, who took the course of harsh tyranny and the creation of a cult of personality, was distinguished by more liberal views. The power in the country allowed the prosperity of a multiparty system. Some of them received material incentives and cultural enlightenment from the West. Due to the penetration of the ideas of “human rights” and “freedom of speech,” young people and the elite embarked on a course of democratic values, and Kyrgyzstan became a kind of island of democracy in a sea of tyranny and dictatorship.

In the spring of 2005, the so-called “Tulip Revolution” took place. A. Akaev was dismissed by the minimum number of victims, and his place was taken by the new President Kurmanbek Bakiyev. K. Bakiyev suffered the fate of A. Akaev, after another spring revolution in 2010. The interim head of state was chosen a woman, Roza Otunbayeva, and in the fall of 2011 after the elections, Almazbek Atambayev became the president of the country. In the next elections in the fall of 2017, Sooronbay Jeenbekov became the president of Kyrgyzstan.

We see that the people of Kyrgyzstan have understood that the power is in the hands of the people, and the people can give this power to whom they wish and take it away from whom they wish. The evidence for that is the events of the last ten years of political instability in the country, which remains so to this day. Every time when people are dissatisfied with their power, they easily rise to the revolution and displace their ruler. And therefore, each spring, the politicians of Kyrgyzstan arrive in fear of a possible new revolution of the people.

Unfortunately, the people of Kyrgyzstan, being Muslims, are poisoned by the enlightenment of the West, and see the solution of all their life problems only from the prism of the Western secularistic education, which alienated religion from life and does not allow participation in solving problems in the life of a person of the Creator, the Lord of the Worlds.

The Western enlightenment, like a cancer tumor that kills the sick, kills the revolution of the people of Kyrgyzstan. Every time people take to the streets with the desire to change the evil reality for the best, the right and the good, the people fall into the trap of the Western colonialists. Poisoned by secularistic ideas, the elite and the powerful are looking for salvation from their enemies, the western colonialists, whose sole purpose is to colonize the country and plunder natural resources.

Hizb ut Tahrir, being an Islamic political party, has deeply studied the problem of the Islamic Ummah, has found a solution in the Quran and Sunnah and provided a program for the human life, society and the state.

The people of Kyrgyzstan should definitely join the work of Hizb ut Tahrir on the revival of the Second Righteous State of the Khilafah (Caliphate) based on the method of Prophethood. Then your revolution will become the revolution of the Islamic Ummah on the right basis, not to please the disbelieving colonizers, not on the basis of secularistic Western enlightenment, but on the basis of the Quran and Sunnah, in an effort to achieve the contentment of Almighty Allah. Only then you will succeed!

And may Allah help us. Almighty Allah said in His Noble Book: