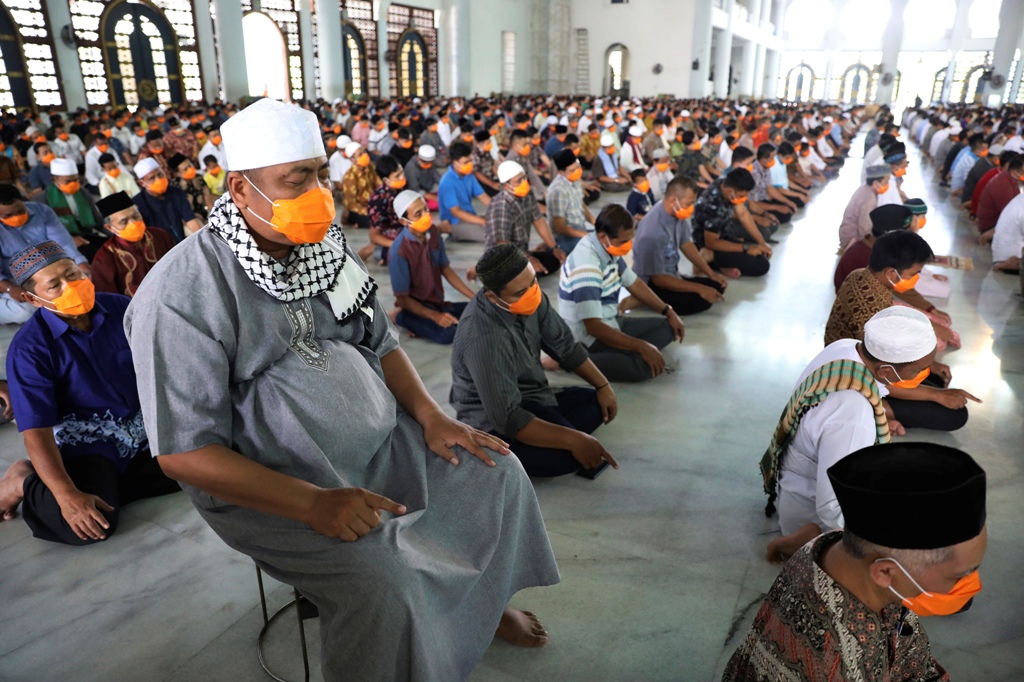 Throughout their long history, humans have suffered from many epidemics that have affected their physical health and affected their development, numerically or practically, due to the rapid spread of these epidemics and their emergence in a sudden and rapid manner, so that people are not given an opportunity to resist and repel them only after thousands of lives are claimed, and after they have caused turmoil and disturbance in societies. If we reviewed the history of epidemics in terms of time and place, we would have found that nations were not free from their emergence and spread, such as the plague, including black plague and influenza of all kinds, especially the Spanish flu, which claimed the lives of 75 million people across the world, cholera, Ebola, SARS, etc., up to the Coronavirus…

Perhaps Coronavirus’s continuation to invade the countries of the world, and the inability to face it or discover a vaccine that can stop it, despite the speedy efforts to reduce it, and despite the strict measures of governments to limit its spread, with the failure of many countries such as Italy, Spain, France and America in front of this epidemic that is not visible to the naked eye, and the surrender of other countries as a declaration resembling defeat to counter it, with the weakness of medical systems exposed even at the level of developed countries, all this has brought many questions to the minds of people: when will the Coronavirus crisis end? And when will people regain their normal life?

Because this epidemic is still worsening according to official medical reports, and it continues to expand and claim more of its victims, and it afflicts the Muslim and the kaffir in the east and west of the earth, but the difference is in the way it is viewed as an infliction, which the Muslim believes in, in his creed, who believes that his Lord will be kind to him (that his Lord will reward him and accept his actions), and he is guided by this view to the best behaviour, in awareness and practically to overcome this crisis in a good way, free from the frustration, despair, apprehension and fear that the West suffers from, who count every shout is at them.

Before we ask when will the Coronavirus crisis end? We must first: pause at an important point; namely that epidemics usually end, they will not remain and will not last, and this crisis will end as many epidemics in the past have ended, with the permission of their Lord, because there is nothing eternal in this universe, and everything has a beginning and an end that Allah has determined for that thing. History is the best evidence of that as we mentioned earlier that epidemics have befallen many nations before us, but they have ended.

The mentality of a Muslim who believes in the limitations of this universe, this life, and all the phenomena that befalls him, makes him assured that everything has an end and that epidemics are past destinies that Allah (swt) will inflict upon whom He wills of His servants.

On the other hand, the end of the Coronavirus crisis depends on the discovery of a vaccine for the virus. As with other epidemics, it may take time, but the day will come when it will be announced, and this is confirmed by the Hadiths of the Messenger of Allah ﷺ. In Sahih Bukhari, from the Hadith on the authority of Abu Huraira that the Prophet ﷺ said: «مَا أَنْزَلَ اللَّهُ دَاءً إِلَّا أَنْزَلَ لَهُ شِفَاءً» “Allah does not send down any disease, but He also sends down the cure.”

In a Sahih Muslim from the Hadith of Jabir ibn Abd Allah, he said: The Messenger of Allah ﷺ said: «لِكُلِّ دَاءٍ دَوَاءٌ فَإِذَا أَصَابَ دَوَاءُ الدَّاءِ بَرَأَ بِإِذْنِ اللَّهِ» “There is a remedy for every ailment, and when the remedy is applied to the disease it is cured with the permission of Allah”.

And in the Musnad of Imam Ahmad from the Hadith of Usama Bin Sharik from the Prophet ﷺ, he ﷺ said: «إِنَّ اللَّهَ لَمْ يُنْزِلْ دَاءً إِلَّا أَنْزَلَ لَهُ شِفَاءً، عَلِمَهُ مَنْ عَلِمَهُ وَجَهِلَهُ مَنْ جَهِلَهُ» “Allah does not send down any disease, but He also sends down the cure. It is known to the one who knows it and unknown to the one who does not know it.”

Secondly, belief in that the good and bad is from Allah (swt) increases the comfort of the believing slave and his reassurance in times of adversity and crises, because the concept of divine fate and destiny (qadaa wa al-qadr) removes fear and anxiety from people. Let us remember well the advice of our Prophet ﷺ to Ibn Abbas as it is the advice for the entire Ummah: «أَنَّ مَا أَصَابَكَ لَمْ يَكُنْ لِيُخْطِئَكَ، وَأَنَّ مَا أَخْطَأَكَ لَمْ يَكُنْ لِيُصِيبَكَ» “and you know that whatever has befallen you, could not have passed you by, and whatever has passed you by, could not have befallen you.”

And if Allah decreed that we are inflicted by this pandemic, no fortresses or towers would prevent us from it, and what happened to the world today makes us well aware of the impotence of human beings before the destinies of Allah (swt), and their money, weapons, knowledge, or authority did not protect them from them! This alone is sufficient to make us realize the greatness of Allah and the weakness of humankind, so we value Him with His true worth, and believe He will only be kind to us (by rewarding and accepting our actions), and believe in His promises and glorify Him (swt).

Thirdly, how to deal with this pandemic:

One of the most important things that a believing servant does in these circumstances is to take the necessary precautions, adhere to the instructions and guidelines, and educate himself and people around him about how to deal with such an epidemic with awareness and practically. In addition to the practical material precautions, we cannot let go of supplication (duaa); it is one of the best cures; it is the enemy of the infliction; it repels, cures, prevents it, removes it or reduces the infliction, and it is the believer’s weapon.

Al-Hakim narrated in his Sahih the hadith of Aisha, may Allah be pleased with her, who said: The Messenger of Allah ﷺ said: «لَا يُغْنِي حَذَرٌ مِنْ قَدَرٍ، وَالدُّعَاءُ يَنْفَعُ مِمَّا نَزَلَ وَمِمَّا لَمْ يَنْزِلْ، وَإِنَّ الْبَلَاءَ لَيَنْزِلُ فَيَلْقَاهُ الدُّعَاءُ فَيَعْتَلِجَانِ إِلَى يَوْمِ الْقِيَامَةِ» “Caution will be of no benefit against Divine Decree, but du’a benefits all things, whether they come down or not. And the calamity comes down, and the supplication meets it, and they struggle (against each other) to the day of judgment”.

One of the most important actions that a believer performs when epidemics and sicknesses occur is accountability!

By this I mean to hold the miserable governments in the Islamic countries accountable; those who increase humiliating their people in such harsh conditions. They do not improve their health care, neither materially or by building awareness, and drift in following the policies of the countries of the Western world, by imposing complete quarantine and complete isolation despite the different circumstances and environments. So the governments’ shaky decisions were a reason for deepening the crisis of the people, with the suspension of economic life and the confinement of people in their homes, and above that, the inability to take care of their interests and livelihoods and provide the most basic elements of their lives! On the other hand, we find these governments rushing to disrupt the Islamic rulings, such as praying in mosques, Hajj and Umrah, on the pretext of preventing gatherings, until the matter came to issuing of Fatwa to the break the fast because of Coronavirus, or the failure of the crescent moon’s investigation in commitment to the quarantine rules!

There were efforts in obstructing the Shariah rules and targeting them directly by some Arab governments that exploited this pandemic to further restrict Muslims from their Shariah obligations, and in return, we see their devotion and delay in providing people’s health and living needs.

The role of the believer servant in this circumstance, and specifically the Dawah carrier, is to hold these rulers accountable for their disdain for people’s lives, interests and livelihoods, especially since Coronavirus has exposed all their corrupt policies, and exposed openly the fragility of health systems and the institutions it is based on, despite what individual doctors and nurses, engineers and other exert of unremitting efforts. But we sensed this time more than every time our need for a real state that saves people’s lives and seeks to protect their interests and livelihoods and takes care of their affairs and makes every effort to address such calamities, and deals well with economic and health crises and is the first in provision of treatment and a vaccine, not to be waiting for the West to present it and humiliate it (such as what the French doctor suggested, of testing the vaccine of the Corona virus on Africans, as they did in some studies on AIDS).

Our need in such circumstances is to refer to the laws of our Lord by establishing a strong and glorious state, in which the ruler will be the servant of his Deen and Ummah’ he will preserve Islam and Muslims, and he will fear Allah and have mercy on us. These are the actions that elevate the status of the slave and make him closer to his Lord, so the believer will gain the honour of this world and the blessings of the Akhira.

As for when will Coronavirus end? A Muslim has to adjust to this epidemic as an affliction from Allah, and accepts Allah’s destiny with contentment and reassurance without discontent or anxiety, and to be patient, contented and awaits the reward. Adjusting to the pandemic relieves its burden and people will stop asking this question, because calamity is a reality that accompanies that Allah’s creation.

Let us focus on what Allah (swt) has entrusted us with of work to repel these epidemics; of individual, spiritual or political actions, especially since we are in such a great month, a month of mercy and goodness. Let us seize this opportunity in the month of Taqwa by doing the elevated and best actions, which is the establishment of Allah’s Shariah completely on His earth, so that we win the good of this world and the Akhira.