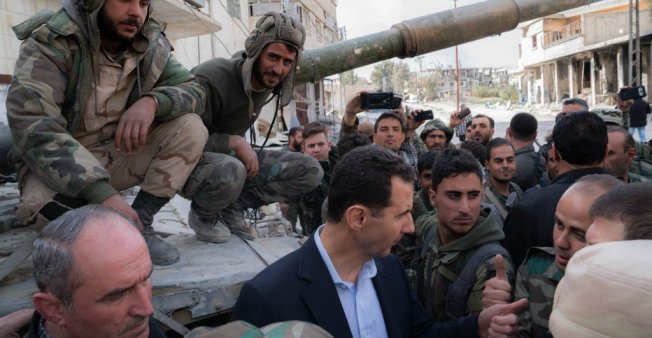 After seven years of sacrifices and bloodshed, and the legendary steadfastness of the people of Ash-Sham in general and of Al-Ghouta of Damascus in particular, here is Al-Ghouta, follows its sisters and is offered to the tyrant of Ash-Sham on a platter of its sons’ remains. There are clear deals which turned the leaders of the factions to the merchants of wars, who have sold blood, honors and regions; wherein the factions leaders played a key role in preventing any serious action against the tyrant of Ash-Sham and maintaining the areas sold pending the date of their delivery.

This is evidenced by the events and facts in many areas, where Aleppo was not the beginning and Al-Ghouta will not be the end. Al-Ghouta would not have this humiliating fate and before it Homs, Aleppo and Daraa … if it was not for the reason that everyone knows, which is the unbelievers turning away in exchange for deals that sold the country, the servants, the blood and the honors.

Since the fall of the Muslims’ state, the Khilafah “Caliphate”; and the Islamic Ummah receives stabs after stabs by the hands of its sons and with the funding of its looted wealth; and this is only as a result of the domination of its rulers over it. Thus, the rule was entrusted to the undeserving people, and so the trust was lost and the Ummah fell easy prey to its enemies. And here is the scene repeated in the revolution of Ash-Sham. After the leaders of the factions took the task on behalf of the puppet rulers of the Muslim, they dominated the necks of the people and climbed on this orphan revolution, which reflects the awakening of the Ummah and its constant movement to get rid of the shackles of its enemies.

Hizb ut Tahrir was truthful to you by drawing the direction of the revolution that guides you to overthrow the regime and establish the rule of Islam, and it warned you not to deviate from the direction, assured you that victory is not plead from the enemies of the Ummah, even if they claim friendship, and that victory is from Allah alone. And it has invited you and still inviting you to give the political leadership to the conscious group, and to the adoption of the great project of Islam represented by the Khilafah Rashidah (righteous Caliphate) state on the method of the Prophethood, in order to achieve the condition that Allah Almighty made to support his servants, He (swt) said:

“O you who have believed, if you support Allah, He will support you and plant firmly your feet. But those who disbelieve – for them is misery, and He will waste their deeds.”

Today, the enemy from the friend has been revealed to you, and you have realized the danger of what you have been warned of, and there have been many wounds in your body, but they have not killed you, and you should not let them do so, rather they must be a motive for you to stand on the Truth (Al-Haq) without deviation. The traffickers in the sacrifices of the Ummah have sinned against themselves, their matter has been exposed, and they fell in the quagmire of compromises. So, complete your path, inconsiderate about them, relying on your Lord, holding on to His orders, confident in Him and His ability, not despairing or weaken. Allah (swt) says:

“So do not weaken and call for peace while you are superior; and Allah is with you and will never deprive you of [the reward of] your deeds.”