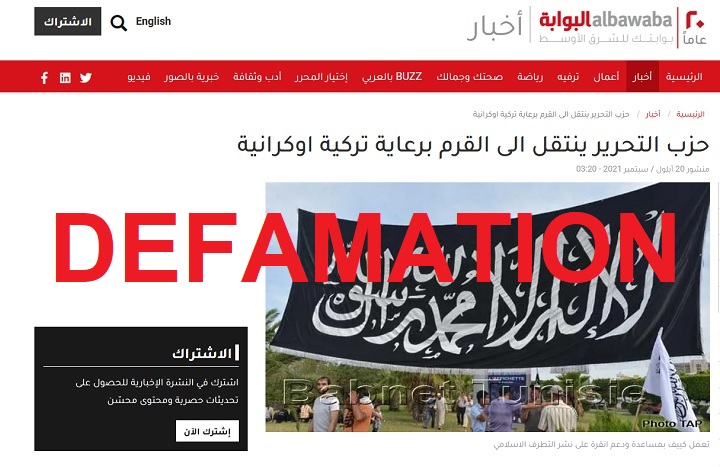 Al-Bawaba’s Fabrications against Hizb ut Tahrir is an Example

Al Bawaba website – headquartered in Amman, Jordan – published on 21/9/2021 a shabby article entitled: “Hizb ut Tahrir Moves to Crimea under Turkish-Ukrainian Sponsorship”, which was filled with numerous lies, and clear fabrications… Regarding this we say:

Hizb ut Tahrir has nothing to fear or hide. Its adoptions, thought, approach, method of work, goals, objectives, and actions are all published on all its media pages. It is an ideological party, internally in harmony, this is why such websites, hired writers, and minds that have stopped thinking, cannot obscure its radiant image, or confuse the world about its truth, purpose, and actions.

It is also naive, to publish lies on the Internet, the same place and time where it is possible with the push of a button to expose the obscenity of lies mentioned in the article!

What is astonishing of what was said, is hinting or declaring that Hizb ut Tahrir carries out material activities, by carrying arms! This starkly contradicts the adoptions of Hizb ut Tahrir. Hizb ut Tahrir has adopted, to achieve its goal; which is the resumption of Islamic way of life after its interruption by disrupting the rule by Allah’s law, the method of the Messenger (saw), including not to use material force in the establishment of the Islamic state. As for the purpose of these allusions and statements, is that, the regimes and their Media machines that lack the basics of media (principles), such as honesty and honour in reporting news, they, can never stand in the face of the party and its thoughts, for they are inferior to debate and discuss; therefore, they will not show their intellectual weakness, which will inevitably crumble before the thoughts of the party. This is why they are imprudent and excessive in spreading their falsehood and fabrication, and thus they will not win an argument for themselves and others who conspire with them and plot against Islam, its people and carriers of its call, and so they choose to oppress, and fight the thought by arrest and torture, as is happening now by all regimes, especially in the region mentioned in the article, Muslims now, and the callers who call to Allah and His laws, are subjected to various forms of torture and long years of imprisonment.

How can a secular regime like the Turkish regime support Hizb ut Tahrir, while Hizb ut Tahrir does not cease to declare its subordination, and the regime continues to fight it and restrict it in its country?! The liar exposes himself, and his words are unreliable.

The media, which exposes itself to such situations, is a media that lacks a charter of honour, a media that quarrels and is unjustly insulting in that, stripping itself of all its professionalism and ethics, and does what the most powerful forces did not do in the days of ignorance, so that it is not said that it lacks honour in the quarrelling! Heraclius, when he asked the Muslims: who among you knows Muhammad who claims to be a Prophet in Mecca? Abu Sufyan answered him about the truthfulness and honesty of Muhammad, his morals, sincerity and honesty, even though he was an opponent of the Prophet (saw)!

We are aware that these people will not gain anything from Hizb ut Tahrir, and they were preceded by those who had mightier media machine and more malicious and cunning. Hizb ut Tahrir has become well known in the world, and its idea, praise be to Allah has become an idea that all Muslims carry, which is the idea of restoring the Khilafah (Caliphate) and restoring confidence in the rulings and system of Islam.

In conclusion, we call upon those who invent lies, serve those who finance them, and abandon all principles and ethics for that, to know with certainty that they will not change the facts, they will not be able to conceal them, their tyranny that they are trying to patch, their oppression that they seek to perpetuate, will end, and their chains must be broken and their media will perish, and that the sun of truth will shine against their will.

“It is He who has sent His Messenger with guidance and the religion of truth to manifest it over all religion, although they who associate others with Allah dislike it” [At-Tawba: 33].