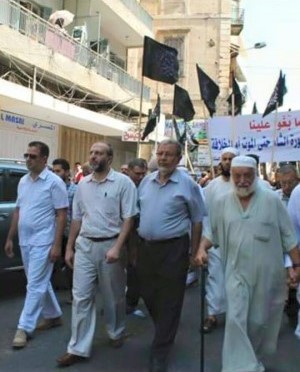 Can we work towards the establishment of a Caliphate whilst being immersed in a state of ‘sin’? Muslims who advocate the resurrection of the Caliphate are often challenged on the grounds that Muslims cannot work for such whilst being in a state of deep-sin. To say the least, such a claim is marred by ambiguity and is detached from any Islamic let alone realistic conception of society – much akin to the Christian Theologian St. Augustine’s concept of the “two cities”[1]. In this piece, we will examine the contention from an Islamic perspective and demonstrate that it is debased even on the most elementary grounds. This piece is an open letter of sorts, for our respected du’at and scholars who continue to perpetuate this contention problematic contention, which not only mystifies the political future of the Ummah but disseminates a misconstrued understanding of Islam and society.

In this regards, one cannot but remember the words of Ibn ‘Ata Allah al-Iskandrani (d. 709):

“Do not say, “What benefit shall I derive from attending religious gatherings, while I remain steeped in sin and unable to leave it?” The archer must continue to shoot! If he does not hit his target today, he will hit it tomorrow…””

To state that we must overcome our current sin(s), before engaging in the obligation of working towards the Caliphate, is to say that: whilst we engage in these sins, we shall add to it a new sin i.e. neglecting yet another obligation.

To engage in one sin (and subsequently forgo a legal-ruling) does not nullify the obligation to redeem oneself of other sins. In fact, there is no obligation in Islam which becomes incumbent only when another sin is overcome. For example, one cannot state that Salat becomes an obligation only when one overcomes alcoholism or laziness, or that Hijab is not an obligation until one has overcome Zinā (adultery). We are obligated to both establish the Salat and not succumb to alcoholism and it is incumbent on the Muslim women to both wear the Hijab and abandon Zināʾ. Again, to state that I will only wear Hijab when I overcome Zināʾis to engage in two sins as opposed to one.

There are No “Stages of Obligations” in the Shari’

That being said, there are rulings which become obligatory (fardh) only when a conditional (shart) and/or causal legal ruling is met. The Usūliyyun refer to these as ahkam al-wadi’iyyah (conditional rulings). The ruling on establishing the Salat is that it becomes obligatory when one reaches an age of puberty (Sabab). Similarly, Zakaat becomes an obligation only when one receives a certain level of income (nasab). Fasting becomes an obligation when the month of Ramadan begins. In other words, the Shari’ determines both the original ruling (al-ahkaam al-taklifiyyah) and the conditions (ahkam al-wadi’iyyah) which render that ruling to be an obligation. This is demonstrated in the following narration:

Narrated Al-Bara (ra), a man whose face was covered with an iron amour (i.e. clad in armour) came to the Prophet ﷺ and said, “O Allah’s Messenger! Shall I fight or embrace Islam first?” The Prophet ﷺ replied, ““Embrace Islam first and then fight.” So he embraced Islam and was Shaheed. Allah’s Messenger ﷺ said, “A little work, but a great reward.” (He did very little after embracing Islam but he was rewarded in abundance).[2]

In this narration, it becomes abundantly clear that the obligation of Jihad was not annulled by the obligation to perform Salat and/or not having performed Salat. In his seminal work Madarij al-Salikeen, Ibn al-Qayyim explains that:

“…They say that the best worship is to do what will please the Lord at every time in accordance with what that particular time calls for. So, the best acts of worship during the time of Jihad is Jihad, even if this leads to abandoning certain rituals such as night prayer, fasting, etc. In fact, this applies even if you are to not pray a complete obligatory prayer as you would in times of safety and calm. And the best thing to do when you have a guest, for example, is to see to his rights as a guest and to preoccupy yourself with that instead of the recommended rituals you would usually engage in at the time.[3]

What we need to deduce from this point is that Islam does not consist of “stages of obligation”, in which one moves from obligation to obligation only after having fulfilled the previous “stage”. These legal-rulings all exist harmoniously and are interdependent – and we act upon (when and here) them as per dictated by the Shari’. For example, one does not move from the stage of fulfilling the obligation of paying Zakat only after one has perfected his or her Salaat.

The Shari’ and Practical Obligatory Nature of the Caliphate

To bring this back to the original point, when does the ruling of establishing a Caliphate become an obligation? The Caliphate, like the practice of ijtihād or Jihad becomes an obligation upon the Ummah when it is absent or what the scholars have referred to as fard kifayyah hatta yakum (it is a communal obligation until it is brought into existence) as adduced from the Hadith:

“Our position on appointing the Imam is that it is obligatory by text…the consensus of the Muslims of the first generation after the passing of the Prophet ﷺ to avoid being in a state of not having an imam has reached us by concurrent narration (tawatur). This was emphatic to the extent that Abu Bakr (ra) said in his sermon, “Behold, Muhammad ﷺ has passed away, and it is necessary for this deen to have someone to lead and implement it,” so the companions all moved swiftly to accept him and leave for him to decide about the most important matter, namely, the burial of the Messenger of Allah ﷺ. The Muslims have remained on this position in every age up till this time of ours, in appointing an imam who is followed.” [5]

Furthermore, it is also important to remember that the establishment of the Caliphate is also a means towards the fulfilment of other obligatory legal-rulings such as the implementation of the Hudud, distribution of wealth, and Jihad. That explains why Imam al-Ghazali stated: “from the necessities of the shari’a that simply cannot be left” and Al-Amidi explained that: “from the greatest interests of the Muslims and greatest pillars of the deen” (al-Amidi), similarly Imam al-Qurutibi states: “a pillar from the pillars of the deen” and Al-Haskafi accurately places it as: “the most important of obligations” (al-Haskafi). It is regarded as one of the greatest pillars of Islam because the Caliphate is the Islamic medium through which we implement Islamic law – and it is the only legitimate medium because the implementation of Islamic law which emanates from the distinct Islamic ‘Aqeedah requires a system which emanates from that same ‘Aqeedah. It would be nonsensical to state that one ought-to implement a liberal law vis-à-vis a socialist system. In the same sense, it would be nonsensical to implement Islamic law through a non-Islamic system which does not emanate from the Islamic ‘Aqeedah. Furthermore, it is important to remember that humans are social beings in two ways: (1) we cannot function outside of a social context (a set of intersection social, political and economic relations and (2) we are conditioned by our social context. Accordingly, Islam must be a comprehensively lived deen, if it is to condition society. To live in a society which inhibits sin, therefore, requires an Islamic system. To state that we need a sinless/Islamic society in order to have an Islamic system amounts to putting the bandwagon before the horse – it is a fallacy. This brings us to an important problem with the contention that we ought-to absolve ourselves of sin before working towards establishing an Islamic system: those who make such a claim, adopt not only an erroneous understanding of Islam but also an erroneous understanding of society.  The same fallacy applies to those who claim that we do not have the resources (be it economic resources or military) to establish a Caliphate – they fail to understand that we cannot possess economic and military power without a Caliphate. They fail to understand that our problem is not a lack-of-resources but rather a the political and military means to utilize those resources and the only way to do so is vis-à-vis an independent state.

Absolving Oneself of Sin in the Absence of a Caliphate

To absolve oneself of sin, in the absence of the Caliphate, requires that one work towards its establishment – meaning that the sin of not having given bay’ah to a Caliphate is absolved when one works towards the fulfiment of that obligation. For example, if one sets out to establish the obligation of Hajj and succumbs to death whilst doing so, he or she will be rewarded as though they have performed the Hajj as indicated in the Qur’an:

“And whoever emigrates for the cause of Allah will find on the earth many [alternative] locations and abundance. And whoever leaves his home as an emigrant to Allah and His Messenger and then death overtakes him – his reward has already become incumbent upon Allah. And Allah is ever Forgiving and Merciful.” [6]

In Fiqh, this is referred to as Hukm al-Talabus. In turn, the relatives of the deceased are not required to perform the Hajj (Hajj al-Badl) on his or her behalf.

The Islamic Methodology for Establishing the Caliphate is based on Ijtihaad

But what does it mean to work for the Caliphate? This is a critical matter, which also requires careful attention. In the same way that Shari’ determines obligatory legal-rulings, it also enjoins a Shari’ method (at-tariqa ash-Shari’iyyah): set of legal-rulings which serve as a means to that obligatory legal-ruling. To fulfill the obligation of establishing the Salat, the Muslim must also fulfill a set of legal-rulings including: wudu, declaration of one’s intention, the takbir, tasleem, and so forth. In that respect, to work towards the Caliphate means to work in accordance with the Islamic methodology through which the Caliphate is established, more specifically, the Prophet methodology. To deduce this methodology we must engage in Ijtihaad.

Deducing this methodology is not based on our own strategic calculations or immediate interests. Nor can it be based on a reaction to a particular reality as was the case with the Muslim Brotherhood’s reformist strategy which they developed in response to the marginalizing policies of the Egyptian government or the Jihadist strategy of armed insurrection which was developed as an immediate reaction to the armed suppression of Islamic movements by the Muslim world’s authoritarian regimes. These both represent reactions and exceptional measures and not an Islamic methodology. Even if these ‘exceptions’ were legitimate i.e. based on Ijtihaad, they are not the Asl (the original state/ruling) in the same way that shortening of the prayer is not the Asl but rather an exceptional hukm-shari’ practiced in a particular situation which is determined by the Shari’. No sound Muslim would deduce the methodology for fulfilling Salat by building on the case of the mussafir (the traveler). In fact, the rulings pertaining to the case of the mussafir are part of an overarching and fixated Islamic methodology of Salat which contains legal rulings pertaining both to the states of exception and otherwise. The Islamic methodology for political change is the same: it, alone, can define the states of exception as well as the rulings pertaining to normal circumstances. On that point, being in a state of ‘sin’ is not regarded as an exception which nullifies the obligation to work towards re-establishing the Caliphate.

In conclusion, it is erroneous to state that we cannot work towards the establishment of the Caliphate until we reach a certain state of “purity” because such a statement has no basis in even the most rudimentary foundations of Islam, more specifically, that of Fiqh and Usūl al-Fiqh.

[1] This issue was addressed here: https://www.youtube.com/watch?v=KpO5PYO1seQ