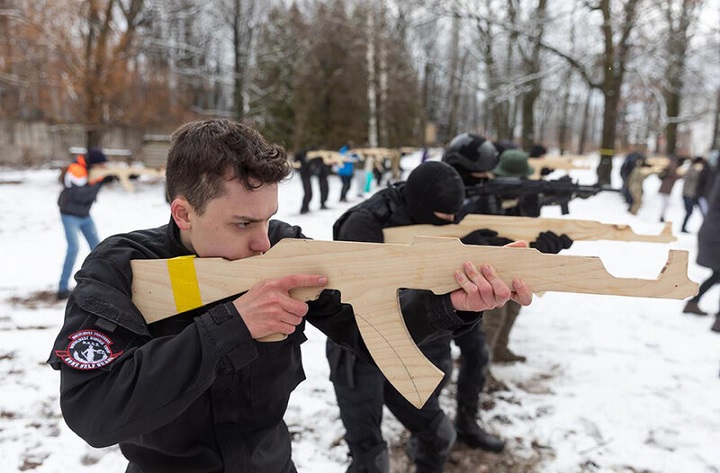 Comment:
Prior to the invasion of Ukraine by Russia the United States was actively engaged in the public announcement of the developments related to the Russia-Ukraine crisis. It was well aware of Russia’s plan to invade Ukraine and even when it would happen. On multiple occasions US president Biden signalled out that a Russian invasion of Ukraine was imminent and prepared the international community for this upcoming war. Remarkably it did not take any major precautionary measures to deter the invasion of an expansionistic nuclear power on the borders of its “ally” Europe, other than threatening with sanctions.

In fact, the US prior to the escalation fuelled the existing tensions between Europe and Russia by holding a series of large-scale military exercises in Eastern Europe with its NATO partners. In 2019 the US Army announced that its “Defender Europe” exercise was to be the largest test deployment of U.S. forces to Europe in a quarter century. Was it not for COVID the exercise would have involved 20,000 U.S. service personnel who were to move from bases in North America “to locations across Europe, including Poland, the Baltics, some Nordic nations and Germany”. The following year 9,000 troops were deployed to Europe.

So, it seems like the US was not only willing to prevent the upcoming invasion but even fostered it by provoking Russia in Eastern Europa with Ukraine. Hence it gave an eyewink of approval to Russia to enter Ukraine.

For Russia, the annexation of Ukraine is just a part of a broader plan to restore Russia’s significant position on the international stage as it had before. After the collapse of the USSR, former US Secretary of State Madeleine Albright said the following in 2000 about President Putin: “He feels sorry for what has happened to his country and is determined to restore its grandeur.”

Since then, Russia keeps a tight grip on the former Soviet Republics. In 2008 it annexed parts of Georgia and in 2013 it annexed the Crimea / South of Ukraine and now it is trying to annex the East of Ukraine by force.

In order to stop this expansionistic drift, the US, confronted Russia with the EU in Ukraine. The speeches of Putin on national television where he declared his grandiose vision of a great Russia and his follow-up actions of war preparation and finally invading Ukraine were eagerly used to create a public opinion against Putin and his ideals. He became the embodiment of a dangerous warmonger, a new Hitler and danger to peace and the free world; which resulted in a long list of heavy sanctions by the US, UK, the EU, Japan, Australia, New Zealand and Taiwan in order to punish Russia and isolate it. As the European Commission President Ursula von der Leyen put it: “Russian President Vladimir Putin must and will fail.” These sanctions may not have a direct effect in the near future but it will definitely have an effect on Russia in the long run and weaken its position. Exactly the position the US wants Russia to be in.

On the other hand, the US also made use of this crisis on Europe’s eastern border to pressure the EU to bring it back to the American sphere of influence. Since the Trump administration and its defeat in Afghanistan, the EU has lost its confidence in the US and begun to sail its own course. The US wants to reverse this development by creating a problem for Europe which it can’t handle it by its own. This inability to act against the recent Russian threat is exactly what we witnessed in the EU. The EU is divided and does not have a strong military striking power. As the German former defence minister A. Kramp-Karrenbauer said: “I’m so angry with ourselves, because we have failed historically. After Georgia, Crimea and Donbas, we have not prepared anything that could really deter Putin. We have forgotten the lesson from Schmidt and Kohl that negotiations always take precedence, but at the same time you have to be so strong militarily that non-negotiation cannot be an option for the other side.” So, the EU was once again reminded of its weakness and still needs US’s military power and influence.

Making use of the weakened situation of Europe, Biden even interfered in the domestic issues of Europe. For example, he rushed to impose sanctions on the Nord Stream 2 gas pipeline which the US strongly opposed since the beginning but was not able to stop, now it was.

So, it seems that the US is benefiting from the war in Ukraine. Ukraine is being used and abandoned by NATO and the EU and in the best-case scenario, it will have to cede its eastern regions to Russia. Russia will probably manage to annex the Eastern part of Ukraine up to Crimea and install a pro-Russian regime. The plan is that Russia will be weakened due to the imposed international sanctions and isolation in the long run, unless the relationship and cooperation between Russia and China improves. And the impotence of the EU once again throws it back into the lap of its big brother USA.