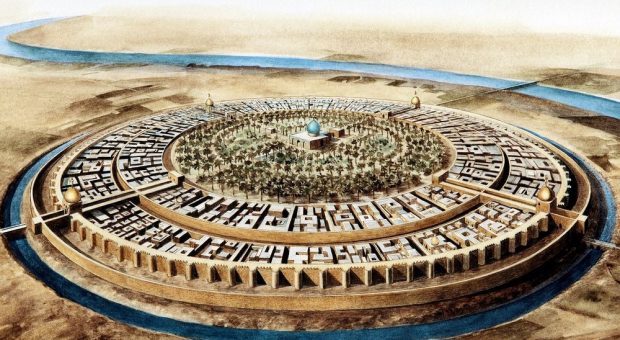 The idea of a Caliphate is constantly mocked by the West and their secular Muslim agents that rule over the Muslim World. The people who call for its implementation are labelled extreme and radical in the Western World and are imprisoned, tortured and even killed in the Muslim World. This is besides the fact that an Islamic Caliphate was implemented for over a 1000 years and is a part of history that cannot be ignored. In this article, we take a look at some of the contributions of the Caliphate to the World.

The first Islamic State was established by the Prophet Muhammed ﷺ himself, in Madina Munawara in the 7th century. Based on monotheism it united people of different colours and creeds and eradicated status inequality. It eventually came to be embraced by many nations and peoples. At its height it stretched from Morocco and Spain in the west, to the Philippines in the east, from the Steppes of Khurasan to the north and to the jungles of modern day Congo to the south. The Muslim world leapt from a period of ignorance and division to a time of unparalleled unity and strength. All of this can be seen from many periods of Islamic history.

During the Abbasid rule of the Khilafah, they began a project of creating a capital city that would be revered around the world. The Abbasid Caliph, Al-Mansur assembled engineers, surveyors and art constructionists from around the world to come together and draw up plans for the city. Over 100,000 construction workers came to survey the plans and were distributed salaries to start the building of the grand city.

Baghdad was the first circular city in the world. Within fifty years the population outgrew the city walls as people thronged to the capital. Baghdad became a vast emporium of trade linking Asia and the Mediterranean. By the reign of Mansur’s grandson, Harun Ar-Rashid (786-806 CE), Baghdad was second in size only to Constantinople. European towns, cities and settlements built walls to prevent raids from outlaws and armies but were typically vulnerable at four points; the corners. If enough pressure was applied at any of these points the wall would collapse and troops could flood through the breach. The Muslims solved this problem by building circular cities.

After the defences of the city were complete, attention turned to how the Abbasids would feed the rest of the Ummah. The development of agriculture under the Abbasids was a phenomenon; the scarcity of water had converted the barren Arab lands into a vast desert, which had never yielded any substantial agricultural produce. The scattered population always imported supply of food grains to supplement the dates and the little corn grown in their own lands. Agriculture in Arabia had been very primitive and was confined to those tracts where water was available in the form of springs. Madina, with its springs and wells was the only green spot in the vast desert. The Abbasids dealt with this by first controlling the flows of the Tigris and the Euphrates rivers. The irrigation system in the land was greatly improved by digging a number of new canals, the largest flowed between the Tigris and Euphrates. This canal was called Nahr Isa (Isa canal) and was open to ships for transportation between Syria and Iraq. This led to navigation routes opening to India and the Persian Gulf. The Abbasids reconstructed the existing canals, lakes, and reservoirs, which were first built under Hajjaj Bin Yusuf in 702 CE. After this the swamps around Baghdad were drained, freeing the city of malaria.

The Abbasids in the 8th century initiated probably the greatest translation project translating the work of the Ancient Greeks into Arabic to preserve them from being lost forever. The careful and painstaking archival work took time, effort and coordination. An institute named Bayt Al-Hikmah was set up and run by the Abbasid Khilafah in Baghdad for this purpose.

At the behest of the caliph an observatory was built and numerous educational institutes which made literacy widespread were created. Other rulers such as Al-Mansur ordered plentiful resources to achieve the task. Translation became a state industry and the Muslim scholars succeeded in what is still regarded today as a truly incredible feat.

Observatories were set up in Baghdad and became an unrivalled centre for the study of humanities and for sciences, including mathematics, astronomy, medicine, chemistry, zoology and geography. The scholars, scientists and specialists drew upon the translated works of previous civilisations such as the Persian and Greek works that included those of Pythagoras, Plato, Aristotle and Socrates. Such works were accumulated and Baghdad became home to a great collection of world knowledge.

Europe had been embroiled in almost constant wars of horrific brutality. Invading hordes and fleeing refugees swamped the continent. In contrast large sections of the Muslim world especially those parts not on the frontiers were serene and tranquil for hundreds of years. In this atmosphere various cities flourished and the story was the same throughout the rest of the Muslim world.

When the Muslims entered Spain in the early 8th century they found people who lived in stone hovels, dirty places with a central hole in the primitive roof to let out the smoke from the small fire they lived around. The inhabitants of these pits would be consumed by soot, tears streaming down their faces. Eye and respiratory diseases were common.

The Spanish would refuse to wash, believing in a form of spirituality that meant they had to avoid an earthly or materialistic life. The animal furs they wore were handed down from generation to generation. The stench was often overpowering particularly as they lived close together in their airless cells. The Muslims, were used to courtyards, canals and gardens. The great city of Damascus in Syria had over a hundred thousand gardens alone. Guided by Islam and a vision of the betterment of humanity the Muslims sought to change this. By the 10th century the Spanish city of Cordoba had two hundred thousand homes, over half a million places of worship, nine hundred public baths and libraries containing hundreds of thousands of volumes. Moreover the streets were paved with stone, cleaned, policed and lit at night. Conduits brought water to the people’s homes and to the city’s many squares and gardens. Students from all over Europe descended upon the city to learn from the acknowledged master scholars of the age.

4- The Ottomans and Diversity

Throughout almost all of Islamic history the Khilafah and the Muslims were a minority ruling over majority non-Muslims. The Qur’an and the examples of the Prophet highlighted how non-Muslims should be treated. The Treaty of Umar ibn Al-Khattab, in which he guaranteed the Christians of Jerusalem their right to practice their faith in total religious safety became the standard model in Islamic history.

The Ottoman conquest of Constantinople in 1453 CE is considered a seminal event in history, but it was also the first time the Ottomans came to rule over a large number of non-Muslims. Constantinople had historically been the centre of the Orthodox Christian world, and had a large Christian population. As the Ottoman Khilafah expanded into Europe, more and more non-Muslims came under Ottoman authority. In the 1530s, over 80% of the population in Ottoman Europe was not Muslim. In order to deal with these new Ottoman subjects, Ottoman Sultan Mehmed instituted the Islamic rules of ruling over a diverse population, later institutionalised into the Millet System.

Each millet was allowed to elect its own religious figure to lead them. In the case of the Orthodox Church (the biggest Church in the Ottoman Khilafah), the Orthodox Patriarch (the Archbishop of Constantinople) was the elected leader of the millet. The leaders of the millets were allowed to enforce their religious practices related to worship.

In addition to worship, millets were given the right to use their own language, develop their own institutions (churches, schools, etc), and in some cases collect taxes. The Ottoman Sultan generally exercised control over the millets through their leaders. The millet leaders ultimately reported to the Sultan, and if there was a problem with a millet, the Sultan would consult that millet leader.

The Ottoman Khilafah reigned from 1300 to 1924 CE. Throughout most of its history, the Millet System provided a system of religious harmony and belonging throughout the Khilafah. As the Khilafah expanded, more millets were organised. Separate millets existed for Armenian, Catholic, and Orthodox Christians, with each sect being divided further into more specific regional churches.

These decrees by the Ottoman sultans Mehmed II and Bayezid II granted the Greek community ownership of the church. The decrees and church remain in Istanbul today.

As the Khilafah weakened European intervention took place and they began to use each millet against each other – something that did not happen for hundreds of years. When the liberal Tanzimat were passed in the 1800s, the millet system was abolished, in favour of a European-style secularist government. The Ottomans were forced to guarantee vague “rights” to religious minorities, which limited their freedoms. Instead of being allowed to rule themselves according to their own rules, all religious groups were forced to follow the same set of secular laws. This actually ended up causing more religious tension in the Khilafah and was one of the causes of the genocide of the Armenians during World War One in the Ottoman Khilafah’s dying days.

The Millet System was a unique and creative solution to running a multi-ethnic and multi-religious, transnational state. The rights and freedoms it gave to religious minorities were far ahead of their time. While Europe struggled with religious persecution into the 1900s, the Ottomans created a harmonious and stable religious pluralistic system that guaranteed religious freedom for hundreds of years.

Whilst no doubt, the Khilafah also had many problems as any human state will have, it’s contribution to the World was unparalleled. The history of the Khilafah demonstrates that there isn’t a contradiction between Islam and Science. In fact, it was under the Caliphate through which scientists such as Ibn-Haitham were to revolutionise the approach to build conclusions upon the observable universe through testing and observation. The motivation for Muslims to excel in science and technology was underpinned by the Qur’an which encourages mankind to exploit the earth’s bounties for the benefit of all peoples.

It also dispels the myth that the Caliphate has a barbaric view towards Non-Muslims. Whilst there maybe incidents in history of Non-Muslims not being treated fairly, this doesn’t change the fact that Islam inherently mandates Non-Muslim citizens to be treated fairly.

These are but only some of the contributions of the Caliphate to the World. It’s clear that the backwardness and camel age attributed to the Khilafah is part of an ideological propaganda campaign to smear the concept of an Islamic polity. Today, Muslims all over the World have the desire to live under Shari’ah law despite the propaganda against the Khilafah. The only obstacle to this, are the imperial powers and their agents that govern the Muslim World by Secular rule. However, the arrival of a Khilafah based upon the method of the Prophet ﷺ is inevitable as it has been promised by Allah سبحانه وتعالى. The acceleration of the aggression against Islam and those who call for its implementation via a Caliphate by the World superpowers is only but a testimony to its nearness. Once the Khilafah arrives it will once again lead the World in science and technology without compromising on addressing and solving the problems of mankind.