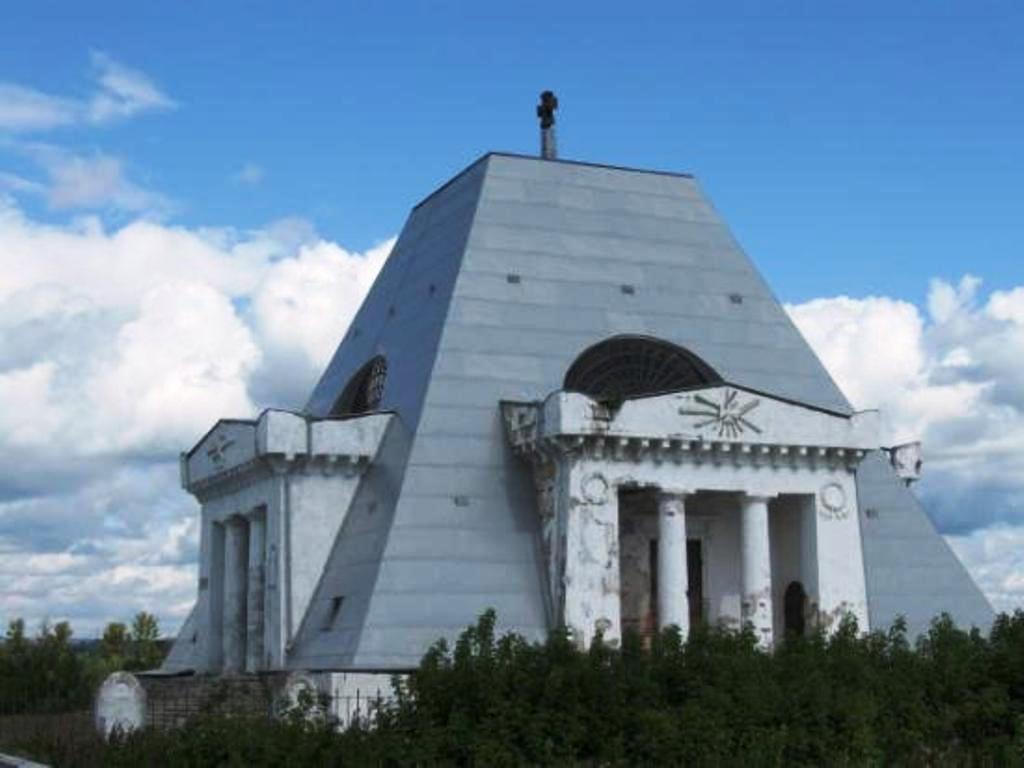 On October 12, 2019, a service was held for the first time in the capital of Tatarstan at the memorial church to the Russian invaders killed during the capture of Kazan. The service was held with the blessing of Metropolitan Theophanes. The bishop services at this monument are held for the first time in a hundred years. Due to the fact that the church was cut off from the Kirov dam by the water, the participants of the event were delivered to it by a boat of the MES (the Ministry of Emergency Situations) that is the state supported it.

Meanwhile, on the same day, another event was held in the Tinchurin Park – an annual memory and dua rally held by Tatar religious and public figures for the deceased defenders of Kazan. The occupation authorities interfered as best they could. So, a bus with riot police was on duty near the gathered people, and FSB officers approached everyone with a warning about the inadmissibility of organizing an unauthorized rally. The city administration had warned the organizers of the rally in advance so that they would not say anything about the independence of Tatarstan from Russia.

What happened this year is perhaps the finale. If the annual rally of memory gathered fewer and fewer people every year, now it has not only been squeezed out by the authorities into the park remote from the human eyes, but as if ridiculed by a parallel Russian Orthodox Church’s service. Let’s consider how it came to this.

In the 90s of the 20th century, when the central authority in the Russian Federation was weak, it made any concessions to the population and national leaders of the “republics” and “autonomies” in order to preserve the state, generously “gifting” them with imaginary “sovereignty” in order to preserve its power over them. Moreover, on the eve of the collapse of the USSR, and the country broke up into 15 independent states. Moreover, formally, in order to maintain at least some influence, the so-called CIS (union of independent states) was formed.

On this wave of the collapse of the Soviet empire, the peoples of Russia, the part that was called the RSFSR during the Soviet Union, also wanted independence. But no one could allow them to do this: it’s one thing to secession of the former Soviet republics, when a total of about 30 million people separated from 170 million people of the USSR, another thing is the collapse of the main part of Russia, where the bulk of the population lives – about 140 million, and this – the lion’s share of the area of ​​Soviet Russia, is about 76%. And in order to somehow save from the complete collapse of the RSFSR (which after 1991 was simply called the Russian Federation and became a separate independent state), Moscow gave all “autonomies” and “republics” in Russia “as much sovereignty as they could take away”. This was a fraud and its essence was that no matter how much “sovereignty” and “autonomy” there was, they all did not have a separate statehood, but were part of one state – Russia. And the deprivation of all these “autonomies”, “special provisions”, was a matter of time, and depended only on the strength and ability of the center. At that time, it was easy to deceive the population, activists and leaders of national movements striving for independence and separation, promising various benefits, “autonomy”, the status of “presidents of the republics”, and allowing them to create local constitutions, legislative bodies, courts, and retain them, thereby from the requirement of the complete independence, secession and the creation of a separate independent state. Indeed, otherwise all Muslim regions — Tatarstan, Bashkortostan, Chechnya, Dagestan, Ingushetia, Karachay-Cherkessia, Kabardino-Balkaria, Adygea — would have split off from Russia, followed by all those Muslims whose territories were in i.e. “Russian” areas – Chelyabinsk, Sverdlovsk, Orenburg, Saratov, Krasnodar Territory, etc.

Then, as Moscow gained strength, the central government became strong, slowly placing “necessary” people in key places in the “autonomies”, or bribing them with various benefits, feeding them the opportunity to “cut the budget” on the ground, blackmailing them in different ways or making them dependent on themselves, Moscow began to take slowly away all these “autonomies” from them, forcing them to sell these “independence” in exchange for their seats and positions and the opportunity to be at the trough of local budgets and rob their peoples.

All of the above relates to Tatarstan. At the peak of the activity of the national movement and the struggle for independence, M. Shaimiev showed the “wisdom and foresight, preventing the war like in Chechnya”, made concessions to Moscow, keeping Tatarstan as part of Russia, in exchange for the “special status” of Tatarstan, for an agreement on the delimitation of powers between Moscow and Kazan, for the status of “president”, the status of “republic” within the Russian Federation, the creation of the State Council of the Republic of Tatarstan with the status of an independent legislative body, on the status of the Tatar language as “state” on a par with Russian within Tatarstan, for independent use of their budget, giving only the agreed part to Moscow. The national Tatbank, a national post office, autonomous within the Republic of Tatarstan, operating on an ongoing basis with the Russian one, were established.

It is important to note that in the 90s all Muslims had a real opportunity to get out of the colonization of Moscow, having completely separated from Russia. But time was lost, and as national feelings declined and due to population disappointment from national movements, the beginning of massive pro-Russian propaganda in the media, and owing to the neutralization of all the independent politicians and journalists, Moscow began to deprive Tatarstan of all the above benefits, statuses, “autonomies”. Tatbank, Tatpost were liquidated, the Constitutional Court of the Republic of Tatarstan completely leveled the laws of the Republic of Tatarstan, bringing them into a full compliance with the laws of the Russian Federation, then Moscow began to decide which part of the budget Tatarstan would keep and which part would give to Moscow.

So, politics became more and more imperial: liquidation began, even of the decorative signs of the alleged sovereignty: governors in the so-called “republics” were deprived of the status of “president”, they began to be called “head of the republic”, the issue of renaming “republics” in the province is being considered, as it was during the time of the Russian Empire, when the military regime headed by governor-general ruled in the conquered territories. For a long time already on the ground the authorized representatives of Moscow are acting in parallel with the heads of the regions, territories, autonomies. If before that the representatives of the titular nation of these “republics” were “elected”, or rather, the heads of the “republics,” now Moscow is not shy about appointing Russians to these posts. Now the language of the national republics is gradually ceasing to be “state”. Its study in secondary schools has become optional, and no more than 2 hours a week. Thus, a gradual “tightening of the nuts” is taking place, and the vertical of power is strengthened.

Recently, this deception with the alleged sovereignty has become more and more obvious and evident, and some of the active intelligentsia openly declare this, for example, the founder of the Tatar party of national independence “Ittifak” Fauzia Bayramova criticized the assertion that the Tatars has its own state. “This is not a state, but a colonial administration,” she said this year at a rally in memory. She believes that all this “sovereignty” was self-deception “and demanded the decolonization of Tatarstan. Unfortunately, the enlightenment of the Tatar national intelligentsia came too late.

Today, the level of the colonial pressure on Muslims in the region has peaked in the past 30 years. Moscow pursues a deliberate policy of rewriting history, presenting its occupation in a good light, remains silent or is hiding the violent nature of Christianization, and sometimes the very fact of colonization, erasing all historical traces. The historical materials that reveal the true story of this are recognized as “extremist” by the courts and are prohibited. The capture of Kazan is presented as “protection and defense”, and the day of the fall of Kazan is called “the day of the unification of the peoples,” and Ivan the Terrible, allegedly worth thanks for the work and enlightenment that he brought to the Kazan Khanate and other lands of the future Russian Empire. And this has already become the opinion of the parishioners of the churches of Kazan.

This situation is another historical lesson for Muslims, who must understand that every time they turn away from the imperatives of Islam, giving slack or compromising with the invaders, they will certainly suffer defeat. The most important thing today for the peoples of the region in the conditions of impossibility to free themselves from the colonialist is the comprehension of their colonial status, the cessation of any collaboration with the occupier and the concentration on the return and preservation of the most important thing – religion and life according to its laws. Praise be to Allah, in recent years we can observe among all the Muslim peoples occupied by Russia a tendency to revive religious and political consciousness, and the more the Russian colonialist tries to extinguish this wave, the stronger it becomes.

Allah Almighty says in the Quran: وَلَن تَرْضَى عَنكَ الْيَهُودُ وَلَا النَّصَارَى حَتَّى تَتَّبِعَ مِلَّتَهُمْ قُلْ إِنَّ هُدَى اللَّهِ هُوَ الْهُدَى وَلَئِنِ اتَّبَعْتَ أَهْوَاءَهُم بَعْدَ الَّذِي جَاءَكَ مِنَ الْعِلْمِ مَا لَكَ مِنَ اللَّهِ مِن وَلِيٍّ وَلَا نَصِيرٍ “And never will the Jews or the Christians approve of you until you follow their religion. Say, “Indeed, the guidance of Allah is the [only] guidance.” If you were to follow their desires after what has come to you of knowledge, you would have against Allah no protector or helper.” [2:120].