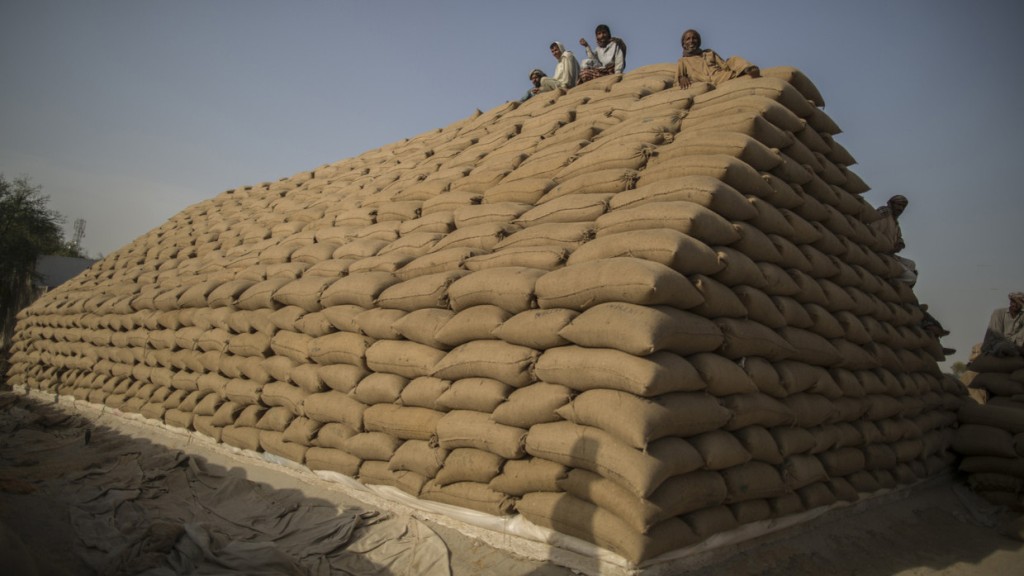 Prime Minister Imran Khan on 27 July 2020 directed the chief secretaries to accelerate action against elements involved in wheat hoarding which have resulted in shortages and price rises. He asked that through mutual consultation, they should evolve a mechanism for bringing uniformity in prices of wheat and flour throughout the country. The rulers of Pakistan are having trouble controlling the rising prices of wheat due to its shortage in the country. They have tried threatening hoarders to release their stock of wheat in the market. They even looked into importing wheat to meet the demand in the market.

There are two factors in the shortages. Firstly, fertile land has been under the possession of people for years and they haven’t used the land in all this time. No one asks the people what they are doing with this land. There is no accountability and once they have purchased the land. So, land in the country has not been managed to maximize capabilities for cultivation and production. Secondly, suppliers use the method of hoarding. They pile up stocks of the commodities causing the shortage of a product in the market. They then wait for the prices in the market to rise, releasing the product into the market, when the prices are high, to get maximum capital returns. This results in many people facing great hardship in buying a basic food product, such as wheat in this case. Instead of prolonged consultation, Pakistan’s rulers need only refer to Islam to deal with this shortage of wheat and increase in its prices. Rather than importing wheat, it is upon the rulers to look for a solution in Islam provided to us by Allah (swt). So what does Islam have to say about wheat hoarding and shortages?

Regarding maximizing cultivation, there is clear guidance in Islam. Islam mandates that any land that has been in possession for three years of a person and he hasn’t cultivated the land, it will be taken away from him and it will be given to someone who uses the land.  The condition of possession of agricultural is to work upon the land within three years of taking possession of it, and to continue this cultivation by using the land. If someone did not use it at all during the first three years of his possession, or if he neglected it for three continuous years later on, then he would lose his right of its ownership. Abu Yusuf reported in his book al-Kharaj from Said ibn Musayyib that ‘Umar ibn Al-Khattab said: “The one who circles a land has no right in it after three years.” It is also reported in Sunan al-Bayhaqi from Amru bin Shu’aib that Umar made the circling of land for three years, and if it was left for more than three years and someone else came and cultivated the land, then they had more right to it. ‘Umar made this Statement and enforced it in the presence of the Sahabah, who made no objection, confirming their Ijmaa’ (consensus). In addition Islam also encourages people to cultivate any barren land by tying it to its ownership. Muhammad ﷺ said, «مَنْ أَحْيَا أَرْضًا مَيِّتَةً فَهِيَ لَهُ» “Whoever cultivated a dead land, it becomes his.” [Bukhari]. He ﷺ also said,  «مَنْ أَحَاطَ حَائِطًا عَلَى أَرْضٍ فَهِيَ لَهُ»“Whoever encircled a land by a fence it becomes his.” [Abu Dawud] So, in this way Islam maximizes the use of land and produces a greater amount of crops, in a blessed land which currently has vast lands that are cultivatable, but are not cultivated.

As for hoarding in any form, it is prohibited in Islam. The one who hoards the commodities until the price rises so as to sell them expensively such that it becomes difficult for the citizens to buy them is known as the hoarder. As for the meaning of the monopoliser (Muhtakir) as being the one who hoards commodities waiting for their price to rise, this is because the word monopolised (Ihtakara) linguistically means to gather something and hold it waiting until it becomes expensive and then sell it for a high price.  There exists a clear Hukm in this matter too. The Prophet Muhammad ﷺ said,  «مَنْ احْتَكَرَ فَهُوَ خَاطِئٌ» “Whoever monopolised is a wrongdoer.”  [Muslim] And he ﷺ said, «لَا يَحْتَكِرُ إِلَّا خَاطِئٌ» “No one monopolises except the wrongdoer.” [Bukhari] In the above Ahadith, the term ‘Monopolise’ is used. It has the same meaning as hoarding. There is a specific reference related to the monopolisation of food products. Al-Athram narrated from Abu Umamah, who said: «نهى رسول الله أن يحتكر الطعام» “The Messenger of Allah ﷺ forbade that a foodstuff be monopolized.”

Now if we had rulers that implemented the Islamic law, stopped hoarding and ensured the use of the land to its maximum, the problem of the shortage of wheat and increase in its price would be solved. Similarly, by implementing Islam, such rulers would control the shortage and the huge increase in prices of other commodities too. The goods that the hoarders currently store would be in the market, if the Islamic law is implemented, and so the prices will remain affordable. There is a need of an Islamic economic system which will implement these laws, a system that runs according to the laws of Allah (swt), the Shariah. And that system will only be implemented by the Khilafah (Caliphate) on the Method of Prophethood.