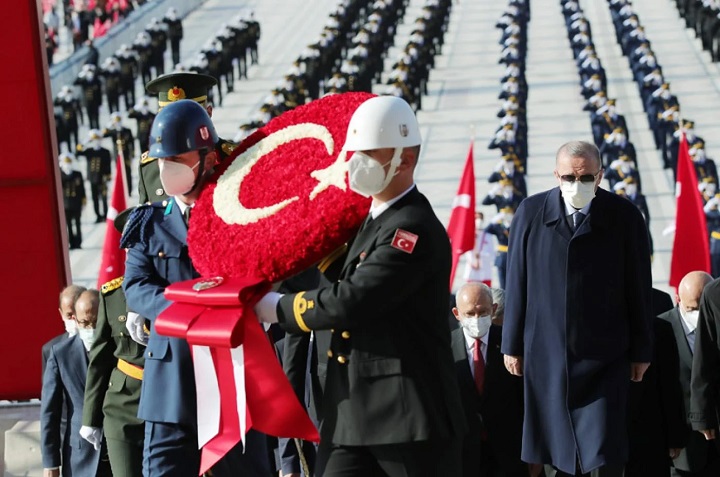 Celebrations are renewed on the 98th anniversary of the establishment of the Turkish Republic on October 29 every year! This day of humiliation, in which all kinds of assaults and insults were launched against the values of the Muslims, and stripped of their power and dignity, is celebrated as a holiday. What is celebrated on this day? Does the celebration occur by the abolition of the Book and the Sunnah, or the abolition of the source of governance and laws from Sharia which is then given to the people?

Or is it celebrated to accustom men to debauchery and women to undress? Do we celebrate the descent of our children and youth into the quagmire of drugs, or allow the consumption of alcohol and intoxication, which causes murder, rape, violence and even traffic accidents? Does the celebration occur through the devastation caused by the Istanbul Convention, the non-familial society project and the European harmonization laws, or the celebration of marking those married in accordance with the rulings of Islam with rapists, or the celebration of accustoming young people to all kinds of immorality in the name of courtship?

Say, is the drift of our youth and our future towards atheism and deism celebrated? Our Prophet Muhammad (saw) said in his farewell sermon:«وَإِنَّ رِبَا الجَاهِلِيَّةِ مَوْضُوعٌ»“The usury of the Jahiliyyah is waived,” yet it is celebrated when usury is considered lawful and the opportunities for granting credit are paved to the maximum extent? This is what the Republic has offered you… These are the things that are called the level of modern civilizations. What is celebrated in the republic that paved the way for all these evils and shortcomings?!

O Muslims: Your misery and helplessness that you are in is indescribable. Look at your country! Do you see a glorious country as in history? Are you satisfied with a country whose foreign policy is under the control of the Kafir, colonial America, and cannot act alone in its lands, and even interfere in its internal affairs?

Look at your lands! Take a look at all the Muslim countries! Vast areas from Indonesia to Morocco, from the Caucasus to Central Asia… Are you not bothered by the fact that the complete control of these vast areas is in the hands of Western countries? Do you not see that those who impose these regimes on us are Kafir countries that exploit our wealth underground and above it? In the eyes of Muslims, the republican system is like a seal in rebellion against Allah and betrayal of Islam and the Ummah of Muhammad (saw). Despite this, despite the passage of 98 years, celebrations take place every October 29th and dances are performed upon the wounds of the Ummah! How do Muslims celebrate the abolition of the Khilafah (Caliphate)?! How do Muslims welcome the abolition of the Book, the Sunnah, and the Law of Allah (swt)?!

O Muslims: It is inappropriate for you to celebrate the republic that was established on the ruins of the Khilafah with tricks and deceit, and was built on the blood of tens of thousands of Muslims who were suspended from the gallows. We know that these are not your demands and desires, but it is you who are exposed to all of this by remaining silent.

“You are the best nation ever raised for mankind: you enjoin what is right and forbid what is wrong, and believe in Allah” [TMQ Aali-Imran:110]

O Muslims: While Allah Almighty sees you worthy of this attribute, it is not appropriate for you to sit idly by watching this series of tyranny! Return to your essence, and save yourselves from this false system and its results! Your nature is hungry and in need of the Khilafah Rashida (Rightly Guided Caliphate) state. So, let us seek to work together for its establishment. Are you ready to draw inspiration and determination to implement it in life?