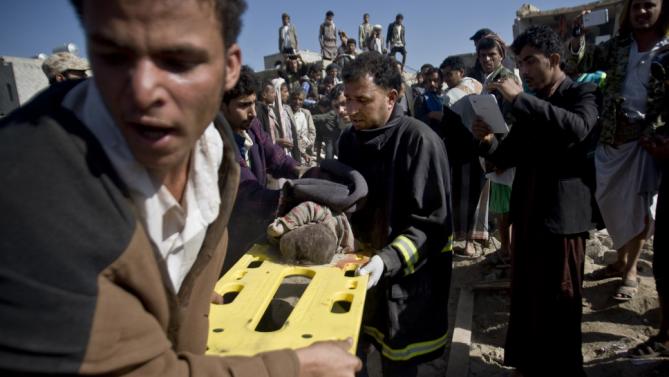 Yemen’s government has urged the UN to authorise the deployment of foreign ground forces to drive back Houthi rebels, specifically in Aden and Taiz. The letter, from Yemen’s permanent representative to the UN Khaled Alyemany, implored the UN. “We urge the international community to quickly intervene by land forces to save Yemen, especially Aden and Taiz,” it said.

After having bombed Yemen to smithereens, attention now turns towards ground invasion. The Saudi led coalition of Muslim countries acting under the tutelage of America have failed miserably to halt the advance of the Houthis and their allies. Worse for the Saudi regime is the fighting in Yemen, which has now spread to the Saudi border town of Najran and a village in Jizan province. Initially, the bombardment of Houthi targets in Yemen was sold by the coalition as a means to roll back Houthis gains that would lead to the eventual restoration of Hadi’s rule. Nevertheless, today the stark reality is one in which Riyadh faces an ever expanding conflict that that threatens to engulf the whole peninsula. Having exacerbated the problem, the Saudi’s through their Yemeni proxies are now pushing for a ground war with a nation that is heavily armed and can be a formidable challenge.

Aerial bombardments and ground invasions are instigated for political objectives. In the case of Yemen, a comprehensive political plan that addresses Yemen’s root causes is absent. The only plan on the table is either to restore Hadi’s rule—this is now far-fetched—or split Yemen as advocated by some. Both options fall neatly into the power game that is being played by foreign powers over the future of Yemen. No this does not refer to the alleged proxy war between Sunnis and Shias carried out by Saudi Arabia and Iran. On the contrary, both Saudi Arabia and Iran are mere pawns on the Middle Eastern chessboard, where the real players America and the EU decide the fate of Islamic countries.

Despite the repetitive and intrusive interference of Western powers in the affairs of Muslim countries, the leadership of the Muslim world continues to provide them with ample opportunity to consolidate their grip. The latest bout of insanity i.e. inept leaders capitulating before the West is Yemen’s request for the UN to sanction ground troops. The UN is a colonial tool hell-bent on preserving the existing political order and Western hegemony. One only has to look at Iraq and Afghanistan to see clearly what the severe damage the UN has done to these countries.

The time has come for Muslims living in the Islamic world to take charge of their circumstances by working for the restoration of a political order that is not only rooted in Islam but will give Arabs and Muslims alike real independence and dignity. But the first step in this process is for the Muslim masses to mobilize for change rather than remain political numb, whilst their leaders implement Western plans.

Wishing for change or making supplication for it, without mobilizing and sacrificing for Islam will not lead to change. Allah سبحانه وتعالى says: