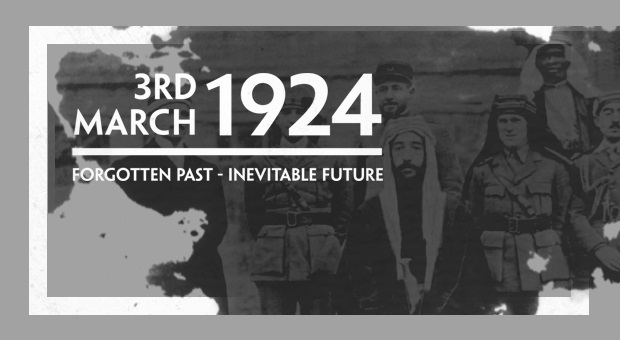 The Muslim world around the globe bears very little cultural and political resemblance to its historical past. The streets of the Indian subcontinent, which were once clear of poverty and crookedness are now slums, which home crime, illegal activity and disharmony amongst citizens. Across the Middle East massacres and bombings have become the norm alongside  runaway inflation. Where there were once upright rulers these have now been replaced with those who usurp the resources of the people and hoard the wealth that could be distributed.

This division of the Muslim world, and the subsequent problems which arose out of this division, came into fruition after the First World War. In the aftermath of the First World War the triple entente utilised their victory to embark on a savage campaign to strip the Muslim lands from the Khilafah and proceeded to divide the Muslim world between themselves, for their own material gain. This was done through the newly established “League of Nations”, which Britain and France used to their disposal. Through deceptive terms such as “Mandates” the British and French proceeded to politically control the Middle East for their own national interests.

These interests included control over natural resources and access to strategic geographical and political locations. This can be seen in the Secretary of the War Cabinet, Sir Maurice Hankey’s statement in 1918, “[control over Iraqi oil] is a first-class British war aim”. The famous and criticised Sykes-Picot agreement is an example of the Alliance’s agenda for the Muslim world during the First World War as well as proof of the influence they had already established in the region, that allowed them to “trade” countries ten thousand miles away.

The result of the Muslim world being politically subjected by Britain and France is the same policy being driven within Somalia, Sudan and Iraq today. The Western Powers used the classic “Divide and Rule”, to cement their political and military presence. This can be seen in France splitting up the Levantine into Greater Lebanon and Syria. After forming these artificial countries, France proceeded to exaggerate the differences between the people of the respective countries, restructure their education and establish rulers sympathetic to the French agenda. This crafted new identities for the Muslims, in the hope that these differences would be a barrier between the people to unite and strengthen. The result, was that even after France left, Lebanon and Syria were no longer united. Similar situations arose throughout the Muslim world with Britain and Saudi Arabia, Iraq and India to name a few. Though this history is extensive, and the process to achieve these new “Independent States” differed in each scenario, the objective and outcome is consistent. Dividing a once strong united people, and creating weak and divided states in their place.

As mentioned previously, the division of the Muslim world took place in the aftermath of the First World War. However, the plans and tactics employed by Britain and France to do this, predated the First World War significantly. The military and political prowess of nations is not sufficient to control such vast sums of land effectively for elongated periods of time, without constant rebellion. British political activity in the Middle East did not require many wars to be fought to achieve dominance. Rather, before the military onslaught was embarked on, a cultural onslaught of foreign ideas was planned, to spark disunity, alongside the backing of rebellious groups to further cause division.

To elaborate, Britain’s role in Saudi Arabia rebelling against the Uthmani Khilafah is well documented. Britain initially attempted this by hijacking the calls of Muhammad ibn Abdul Wahhab who called to remove innovations (Bid’ah) from the Ummah. His calls were hijacked by the British ally, Muhammad ibn Saud, who sought to split the Arabian Peninsula from the Khilafah.

Almost two centuries after this, at the beginning of the First World War, the British resurrected the Arab supremacy over Turks thoughts. This is seen by the British government proclaiming in 1914, “…there is no nation amongst Muslims who is now capable of upholding the Islamic Khalifate except the Arab nation, and no country is more fitted for its seat than Arab countries.” This proclamation was addressed to Palestine, Syria and Mesopotamia. The conditions for the British support of the Arabs was for the Arabs to help overthrow the Uthmani Khilafah’s rule.

Sheriff Hussein, who was the leader of Makkah at the time, responded positively to these calls. As a result, there were relatively small revolts against the Khilafah in 1916, with Britain funding the equivalent of £11 million (equivalent to £400 million today) to the revolt, as well as offering military advice. T.E Lawrence, who served as such an adviser said in an intelligence memo “[The Arab Revolt] was beneficial to us because it marches without immediate aims, the breakup of the Islamic bloc and the defeat and disruption of the Ottoman Empire…If properly handled they would remain in a state of political mosaic, a tissue of small jealous principalities incapable of cohesion.” He later also said, “Sheriff Hussein was chosen because of the rift he would create in Islam.”

Britain proceeded to double cross Sheriff Hussein. Hussein wanted to establish the Khilafah in the Arab world, whilst Britain aimed to ‘divide and conquer’. So, Britain funded Abdul Aziz ibn Saud, who aimed to take rule of Hijaz, and not establish a Khilafah based in Arabia. Since 1915, he had been receiving arms and £5000 monthly.

Sheriff Hussein and his men eventually conflicted with Ibn Saud. Britain finally showed its true colours by the mid-1920s, by showing public support for Ibn Saud over Hussein. Ibn Saud’s funding had also increased to £100,000 annually. Winston Churchill expressed his admiration for Ibn Saud in his statement “my admiration for him is because of his unfailing loyalty to us”.

Since the destruction of the Khilafah the Western powers aimed to maintain the divided states by installing proxy rulers and dictators, controlling the armies and the creation of military bases worldwide.

Since the establishment of the UN, the Western colonialists moved on from having empires, to having political influence and control of countries’ leaders, which achieves the same objectives as empires. For example, it is the same family of Ibn Saud which still holds power in Saudi Arabia today. Nouri al-Maliki was a US backed candidate to the Iraqi post war elections who became Prime Minister and deepened sectarian problems. It was the US who armed both sides in the Iraq – Iran war. France, Britain and the US remain allies to Bashar al-Assad and his family, who are responsible for the 1982 massacre in Hama, and the butchering and starvation of Syria since the beginning of the civil war. Egypt’s Sisi, and Mubarak before him, were subservient US allies. In Pakistan, Musharraf openly accepted his alliance with the US and Sheikh Hasina of Bangladesh does the same. There isn’t a single country that the Western colonialists and the US haven’t tried to influence. Through the establishment of the Syrian National Coalition the US aimed to sponsor and cherry pick candidates to take power over Syria, should Bashar al-Assad fall.

The repercussions of the installation of artificial proxy rulers, independent nations, and the subsequent implementation of Western backed ideals and policies can be seen throughout the Muslim world. The most basic societal activities are dysfunctional, and a large distrust of governments exist. Only those who benefit from the corrupted governments are satisfied with the status quo, yet they recognise the dysfunction and inadequacies of the society they live in and the poor quality of the institutions and services provided for the people. It is no wonder, that they send their children to private and western schools for their education, private medical treatments for themselves, and travel to the western world for tourism.

However, the tides are reversing. The Ummah is letting go of the colonial culture, which plagued it for centuries. The global efforts to relieve the suffering of Muslims in Myanmar, Palestine, Syria and Yemen indicate this. The number of activists reminding the Muslims of One Ummah show this. The Muslims of our time recognise current governments across the Muslim world as illegitimate and also recognise the only true authority Muslims should subject themselves through, is the system Islam provides through the Qu’ran and Sunnah; al-Khilafah Rashidah.

The chickens are also coming home to roost for the west who for long believed there way of life was universal and superior. The mass wealth inequality, social chaos, political deficit and struggle with integrating minorities. In this context the wider problems the west has created has led to many across the world and the muslim world in particular to reject western solutions. The will of the ummah is to take ownership of their destiny and shape a new politics for themselves. This leaves only one conclusion going forward – the implementation of Islam through the Khilafah.