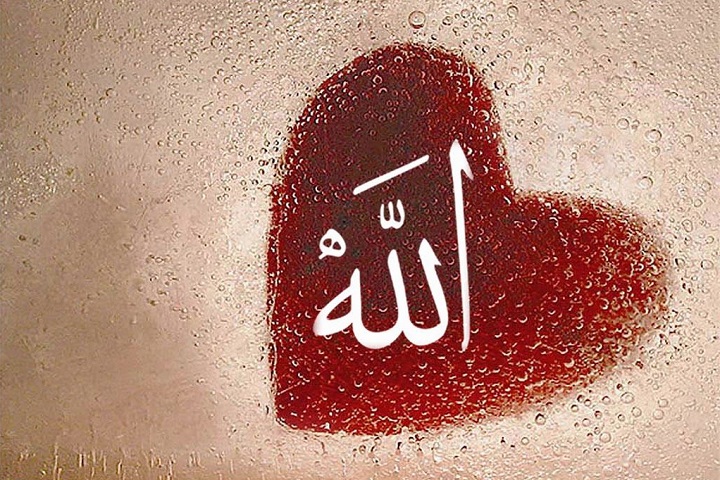 “Say, [O Muhammad], “If you should love Allah, then follow me, [so] Allah will love you and forgive you your sins. And Allah is Forgiving and Merciful.” [Aal-i-Imran: 31] .

We say that we love Allah and His Messenger, and we pray to Him to grant us the pleasure of looking at Him, and we yearn for this day that we see Him in Paradise, but do we act according to what we say and pray for?

For those who love Allah (swt) and long for meeting Him and place His love (swt) and His Messenger (saw) above everything, above their love for themselves, their spouses, their children, their money, their fathers, their mothers, and all people, Allah (swt) says:

“But those who believe are stronger in love for Allah” [Al-Baqara: 165].

What follows this love and this yearning is the belief, obedience, pride in the Deen, eagerness to obtain His pleasure, and other things that bring us closer to Allah and His Messenger.

So, we ask: are we really like that? Do we obey Allah as He commanded us? Do we follow His orders and avoid His prohibitions?

And if we are like that, how can we disobey Him while we love Him?! Does a person love those he disobeys, and disobeys those he loves?! Why do we disobey Him during the day and pray to Him at night? Shouldn’t we be ashamed?

Are we not ashamed of Allah when we supplicate to Him and yet disobey Him? Is it not necessary to repent first and then pray to Allah second?

Whenever you ask what is our duty towards what we are and the oppressed are going through, from hardship in living, injustice and humiliation, they say: You have to pray (make duaa). Everyone is praying and there are more than a billion Muslims praying for their Muslim brothers, but Allah has not changed their situation?!

The question that arises here: Why do we pray and we are not answered?! Or at least what we want is not achieved in the required way?! We have glad-tidings and we are waiting for Allah’s victory by Allah’s permission, waiting for the fulfillment of His promise and the glad tidings of His Messenger (saw).

We pray to Allah (swt) morning and evening, secretly and publicly, for victory, glory, empowerment, and changing the situation of the Muslims. Perhaps some of us lost their voices and our hearts are in Khushu’ and we cried while making duaa. But we see that the situation remains the same, and perhaps it has worsened, so what is the cause?

That is, it is necessary to take the measures to reach victory over the enemies. It is not sufficient for us to pray without action, so do not make your supplication ‘Oh Allah, occupy the oppressors with the oppressors and expel the Muslims from their hands safely’ stop you from working to end the reign of these oppressors wherever they are. Do not make an excuse for not working for the change of the status quo, which will not change except by the return of the rule of the Shariah on Earth.

So, we have to always renew the covenant with Allah (swt), we have to be in constant contact with Him (swt), willing to obey Him and fearing Him and hoping for His reward. We have to obey Allah and His Messenger, apply the rules of His law and submit to His commands and prohibitions, enjoining what is good and forbidding what is evil, with a belief that is not shaken by strong winds. That, by Allah, is the believer’s weapon and his salvation, a weapon that neither the Jews nor the Christians, nor the various kuffar on earth possess. We have to apply sound thought on the ground, for gaps in behavior are not an easy matter. We have to address them and purify them from the blemishes and refine them in the crucible of Islam, taking great care to monitor the self, nurture it, and purify it to do good deeds and submit to the law of Allah (swt). We have to refer to His rulings in behaviour, not just in words. We have to repent sincerely, and rely on Allah (swt) alone and take the measures needed.

The world has taken us away from the Hereafter, as if we are living in the perishable world and abandoning the one that is eternal, in accordance with the words of the Most High:

Yes, many people became distracted with worldly increases and competing in acquiring money and children from obeying Allah and worshiping Him truly, and became distracted from learning Islam and following it, calling to it and supporting it. Their eagerness for the world and its lusts and its ending bliss prevented them from eagerness for the everlasting Hereafter with eternal bliss, their love does not meet in the heart of a Muslim. The Prophet (saw) said:

This is the correct scale of profit or loss. If the servant dies, there is no return to this world, and on the Day of Resurrection, nothing will benefit him except his deeds. If it is good, then it is good, and if it is evil, then he should not blame anyone but himself. His father, his son, his money, his prestige, his authority will not benefit him, nor will he benefit from those whom he followed from the masters and rulers, but they will all absolve him on the Day of Resurrection.

Yes, weakness has struck the hearts, and weakness is the love of the world and hatred of death; it is a serious disease because of which people have failed to worship Allah truly. There are those who neglect the obligations of Allah. There are those who leave enjoining good and forbidding evil under the pretext of “Leave creation to the Creator”!! And among them are those who fail to perform Friday and congregational prayers, or withhold zakat, or cut ties of kinship, and among them are those who commit what Allah has forbidden. You will find those dealing in interest and bribes. And you find someone who cheats, monopolizes, steals, and eats the right of his mother and sisters in the inheritance, rushing over the mortal world. And those who neglect working to establish Allah’s rule in the land and support His Deen or His brothers out of fear for his life and out of concern for his world, or who prefers worldly matters such as family visits, occasions, work and addiction of the social media over her original role as a housewife and mother who has the responsibility of correct Islamic education, so we see what we see of family and moral disintegration, rebellion, ingratitude, and weakness in familial and family relations, and we have become in humiliation and debasement that is not fitting of us as the Ummah of Muhammad (saw).

Is it not enough that we are in humiliation and debasement?! Did not the longing for paradise move us to sell the world and buy the Hereafter and make our lives cheap for the sake of Allah?! Do we not feel the meanings of honour and dignity, so we hasten to it, be we be proud in our Lord, so that He honours us with glory, victory, and empowerment on earth?

“Whoever desires honor [through power] – then to Allah belongs all honor. To Him ascends good speech, and righteous work raises it. But they who plot evil deeds will have a severe punishment, and the plotting of those – it will perish” [Fatir: 10].

Let us return to our Deen and renew our covenant with Allah and hold fast to the rope of our Lord, and let us work to be Islamic personalities in thought, mind, heart, disposition and behaviour. And let us work diligently and sincerely to Allah alone to resume the Islamic way of life, until Allah removes humiliation and debasement from us, and honours us with a Khilafah (Caliphate) on the method of Prophethood. He (swt) has power over all things, Allah (swt) says;

By all of this, we would have loved Allah and His Messenger and worked to meet him on a day when neither money nor children will benefit except those who come to Allah with a sound heart.