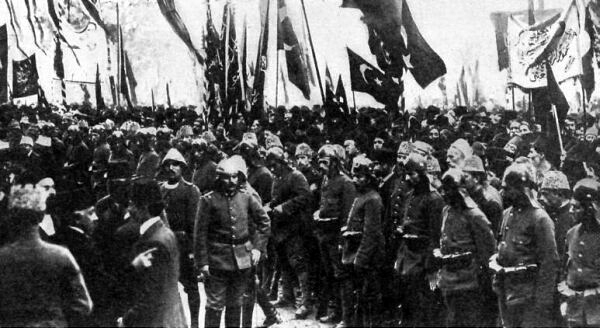 On 3rd March 1923 CE, The Economist Magazine in London wrote about British concerns during the negotiations prior to the signing of the Treaty of Lausanne later that year. “If (Mustafa) Kemal’s Government falls, we may be confronted with a Turkey ambitious to lead a Muslim counter-offensive against the West, with the object of bringing Western ascendency to an end, not only in Turkey itself, but throughout the Middle Eastern world. That would mean a restoration of the Caliphate, an offensive alliance with Russia, and an active fomentation of trouble in North-West Africa, Tripoli, Egypt, Palestine, Syria, Mesopotamia, Persia, and India… It is evident that the political struggle at Angora (Ankara) is of considerable importance for the British Empire.”

Far from the Khilafah (Caliphate) being abandoned and therefore destined to be abolished, it was rather a year later to become a victim of foreign nationalism; an idea totally alien to Islam and Muslims. Indeed, the same publication wrote on 8th March 1924 “The repudiation of the Caliphate by the Turks marks an epoch in the expansion of Western ideas over the non-Western world, for our Western principles of national sovereignty and self-government are the real forces to which the unfortunate ‘Abdu’l Mejid Efendi has fallen a victim. Both by tradition and by theory, the Caliph is an absolute monarch over a united Islamic world, and it is therefore almost impossible to find a place for him in a national state (whether it be called a republic or a constitutional monarchy) in which the sovereignty is vested in the parliamentary representatives of the people.”

Ninety-four years later the Western colonialists have not been able to suppress the desire for political unity among the Muslims of the world, despite their best efforts to divide us over the past century. Yet it is still their desire to impose their rotten nationalist mind-set upon us, in the hope that they can delay the inevitable return of the Khilafah by just a few more years.

Nationalism is the idea that destroyed the unity of the Muslim Ummah and which diverted us from the duty of re-establishing the Khilafah for so long. It is the excuse that the traitorous kings, presidents and prime ministers offer for why they stand idly watching the Muslims of Syria being slaughtered by the thousands; just as they do for the Rohingya Muslims of Burma, the Muslims in Palestine, the Muslims in Yemen, in Bosnia, in Chechnya and everywhere else that colonists felt that such genocide was in their interests.

Nationalism is also the idea that ripped the Soviet Union apart, and is currently wreaking havoc within Europe and America today. It is a filthy idea, not fit for humanity. It is no better than the tribalism that Prophet Muhammad ﷺ said about «دَعُوهَا فَإِنَّهَا مُنْتِنَةٌ» “Leave it, for it is rotten”. Nationalism, xenophobia and division are the hallmarks of the western dominated world order that we have lived under for the past century.

The coming Khilafah that is established on the way of the Prophetic model, will not be a nationalistic state, where certain ethnicities or nationalities have more rights than the rest, as is the case in Britain, America and all other nation states today. Rather, Islam is a message for all humankind, and the Khilafah is a state for everyone, Muslims and non-Muslim alike.

On this anniversary of a great loss to the whole world, we call upon Muslims to not let another year go by without taking every opportunity to remind the world what goodness it is denied, while the Islamic State is still absent. We must at the same time expose for the world the folly of the Western dominated liberal world order, which brings nothing but misery and suffering for all but an elite few.

Now is the time for Muslims to reject the national borders that the colonialists have used to divide us. Now is the time to call upon the capable Muslims in the divided militaries of the Muslim lands to ignore the artificial divisions, and to act as one Ummah to protect the weak and offer Islam to the world again.

“Allah will certainly aid those who aid his (cause); for verily Allah is full of Strength, Exalted in Might, (able to enforce His Will).”