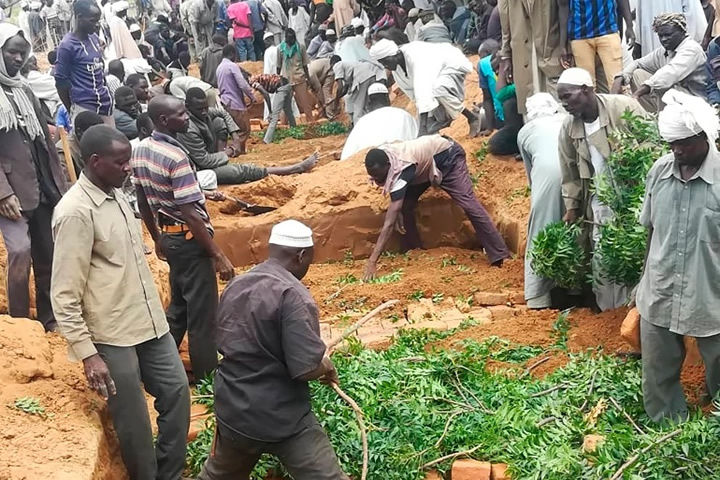 For the second time, and in less than three months, tribal fighting erupts in the city of El Geneina, the capital of West Darfur State, leaving more than 50 dead and 132 injured until writing this press release, and the cause always begins with people, then the matter turns to tribes, and the damned war rages and kills lives in the absence of an effective state, and under of heavy and dense weapons in the hands of the people.

We in Hizb ut Tahrir/ Wilayah Sudan, in the face of the recurrence of tribal fighting incidents without serious action by the government to prevent such disruptions and damned wars, we hold the government fully responsible for its inaction and failure to resolve the matter, especially since it has been repeated in the same region over and over, and we emphasize the following:

“Whoever wakes up secure in his family with a healthy body, having food for the day, it is as if the entire world is given to him”.

Second: We say to our people in Al-Geneina: Is there not among you a right-minded man?! So how do you fight on the basis of the tribe, and the Prophet(saw)said:

“Whoever fights for a cause that is not clear, getting angry for the sake of tribalism, or advocating tribalism, and he is killed, then he has died a death of Jahiliyyah. And whosoever from my followers attacks my followers (indiscriminately) killing the righteous and the wicked of them, sparing not (even) those staunch in faith and fulfilling not his obligation towards them who have been given a pledge (of security), is not from me (i.e. is not my follower)”. And Ibn ‘Umar narrated that the Prophet(saw)said:

“After me (i.e. after my death), do not become disbelievers, by striking (cutting) the necks of one another”. And for the enormity of the fighting between Muslims, our noble Prophet(saw) warned of it firmly, when he (saw) said in the Hadith Narrated by Muslim on the authority of Abdullah bin Masoud:

“Abusing the Muslim is Fusuq (an aggression) and fighting him is disbelief.”

Third: What created a state of tension between the tribes, especially in Darfur, is the state of severe polarization practiced by the government and the armed movements, which provides an incubator for what is happening now in El Geneina.

Fourth: The so-called peace agreement has affirmed and affirms that it does not create peace, but rather is the cause of sedition, as the government takes sides with those who carry weapons and shares power with them, which fills the hearts of others, who did not find their chance in the ruling “cake”, with hostility and rage.

In conclusion: We say to our people in Darfur, and in other different regions of Sudan, that there is no salvation for all of us except by returning to Islam, which brings a decent life for all, and fuses people of all races and tribes, and makes them loving brothers, with the melting pot of great Islam, in which no one is preferred over anyone whoever he was, except by piety and good deeds. So, work for the sake of your glory and for the sake of a decent life in obedience to Allah Almighty, and that is by the serious work with the sincere sons of the Ummah by the establishment of the Islamic state; the second Khilafah Rashidah (rightly guided Caliphate) on the method of Prophethood.