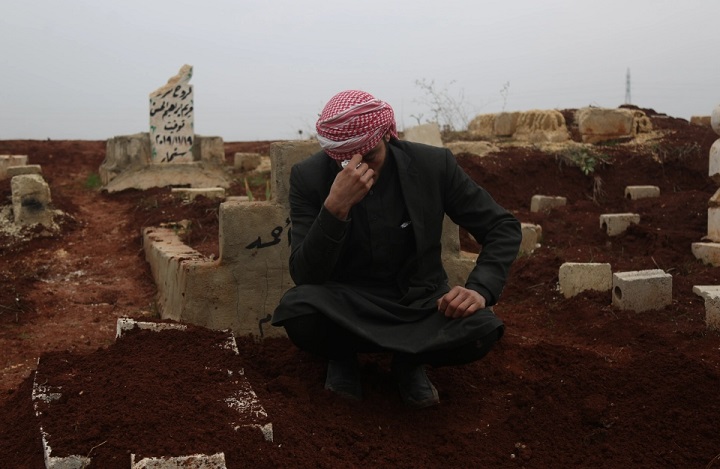 It has been 12 years since the outbreak of the revolution in Syria, and innocent children, women and the elderly are still paying the price of a reckless war, with the participation of avaricious countries over Muslim land and those spiteful of the Deen of Islam and its rulings. Planes, tanks and all kinds of prohibited weapons were used, in addition to the arbitrary practices of the Baathist regime and its militias, including arrest, displacement and forced immigration. This war has claimed more than 350 thousand martyrs and forced millions (nearly half of the population) to be displaced from their cities and villages. The number of displaced people inside Syria, according to the United Nations High Commissioner for Refugees, has reached more than 6.7 million, and the number of refugees in neighbouring countries, such as Jordan, Lebanon and Turkey, is nearly 6.8 million refugees.

12 years since the outbreak of the revolution in Syria and our press releases continue, not to present the numbers of casualties that are constantly increasing, nor to explain the suffering and describe the conditions of the people in order to shed tears over them. Their sorrowful condition is no longer a secret to anyone. But every time, we try to mobilize the sincere men to reject all foreign conspiracies tampering with the security of the country. We also make plea after plea to the Muslim armies to lift the oppression, humiliation and injustice from our people in Syria, in addition to our continuous call to work with us to establish the second Khilafah Rashidah (rightly-guided Caliphate) on the method of the Prophethood, in which is our pride and security.

O Aware Revolutionaries: Is it not worthy, after all these long years, that the reap of all these sacrifices be the realization of your slogan, which you raised: “It is for Allah”, and of your goal, which you announced from the beginning, which is to overthrow of the Baathist puppet regime in all its forms and symbols?!

O Sincere Muslims: Is it not incumbent upon you, after repeating our calls to you, that you work hard with Hizb ut Tahrir to establish the Khilafah Rashidah on the method of the Prophethood, to show Allah (swt) the great goodness from you by fulfilling His (swt) promise and fulfilling the glad-tiding of His Messenger (saw)?

Indeed, it is the Khilafah, which we will evoke the memory of its demolition in the upcoming days, that we are in dire need for, as we count the bodies of our innocent children, and we hear the cries of the bereaved and widows, and we see the tears of oppressed men. Isn’t it time to lift the oppression from the people of Syria, occupied Palestine, Iraq, Libya, Sudan, Afghanistan and many, many others who suffer from the absence of the Islamic state and from the domination of the utilitarian, spiteful capitalists against Islam and Muslims?!

We will not get tired, we will not rest and we will raise our voices louder and louder each time, in the hope that they will be received by attentive ears and aware minds to restore our pride and source of our glory; the Khilafah on the method of the Prophethood.