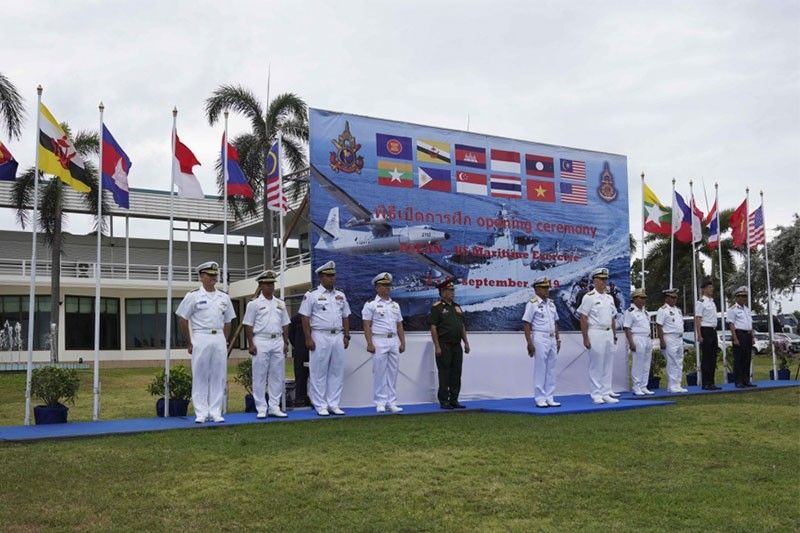 Eight warships, four aircraft and more than 1,000 personnel from the United States and 10 Southeast Asian countries will join maritime drills kicking off on Monday, as part of a joint exercise extending into the flashpoint South China Sea.

The first ASEAN-US Maritime Exercise (AUMX) between the regional bloc and Washington lasts for five days, starting at the Sattahip Naval Base in Thailand and ending in Singapore.

The drills come at a time of stepped-up US engagement in the region and tensions between Beijing and Southeast Asian nations over the South China Sea, parts of which are claimed by Brunei, Malaysia, Vietnam and the Philippines.

Coled by the US and Royal Thai navies, the exercises will stretch into “international waters in Southeast Asia, including the Gulf of Thailand and South China Sea” before concluding in Singapore, according to a statement from the US embassy in Bangkok. (Source: Aljazeera.com 2 Sept 2019)

Comment:
The US is not motivated by noble principles. It is a power play for the US’ own selfish interests to push-back to the Chinese governments’ regional hegemonic ambitions. Non-judgmental, visionless and apolitical ASEAN has to play the balancing act between the bully of the world and the regional bully. Although consisting of 10 countries, without a common ideological basis, or at least common principles they are divided by their individual national interests with China. And so, like the US and other Western nations, in pursuit of its self-justified ‘national interests’, China simply ignores ‘international laws’ and ‘norms’ and does what it wants.

How do we stop bullies like China? Indeed, how do we stop all colonial and criminal tyrannical states from terrorising and plundering the world?

It takes a civilisation built upon an ideology to rise up to bullies and usurpers. The State of Islam was that civilisation. Though initially small, it defeated the more wealthy and powerful mushrikeen in the Hijaz, then Persia and the Eastern Roman empires, the two regional powers of the day within the lifetime of the second Khalifah Al Rashidah. Islam, as a system, went on to enlighten and liberate humankind from ignorance in the rest of the Middle-East, Europe, the Caucasus, Asia, China, India, South East Asia and Africa. Today, Islam as an ideology that has spread to the whole world.

Tragically, we now find ourselves divided and enslaved, suffering from ‘nationalism’, the disease of the West. Our colonial masters substituted Islam for meaningless flags, artificial structures, systems born out of Kufr and taghut. They foisted put upon our heads, corrupted leaders whose self-interests depend upon how well they serve their Western masters’.

ASEAN’s divided and pathetic position at the feet of shameless China and the US is a mirror of our Ummah’s tragedy today. Our so-called leaders are fearless, tyrannical and cold-blooded when it comes to torturing and dispatching the Believers, but pusillanimous when it comes to responding to the attacks of our enemies.

Take Kashmir as an example. Were the leaders of Bangladesh, Afghanistan, Pakistan and the ‘Oil-sultans’ of the Middle East to mount a united response – no fascist leader of India would dare harm a single hair on the head of a single Muslim. Instead, they fete the mushrik leader, who has shown such hatred towards Islam and Muslims with the highest award. Worse, they feed his ‘national interests’ with our petroleum resources. With treacherous and weak-minded leaders like these, no wonder our enemies are so bold.

Islam did not come to raise the Jahiliyyah of racism or nationalism, nor to persecute and spill the blood of innocent people. It did not come to enrich the few with resources that Allah (swt) created for the benefit of all. It does not allow cowards and slaves of Kufr and taghut to put their hands over our heads, let alone their feet.