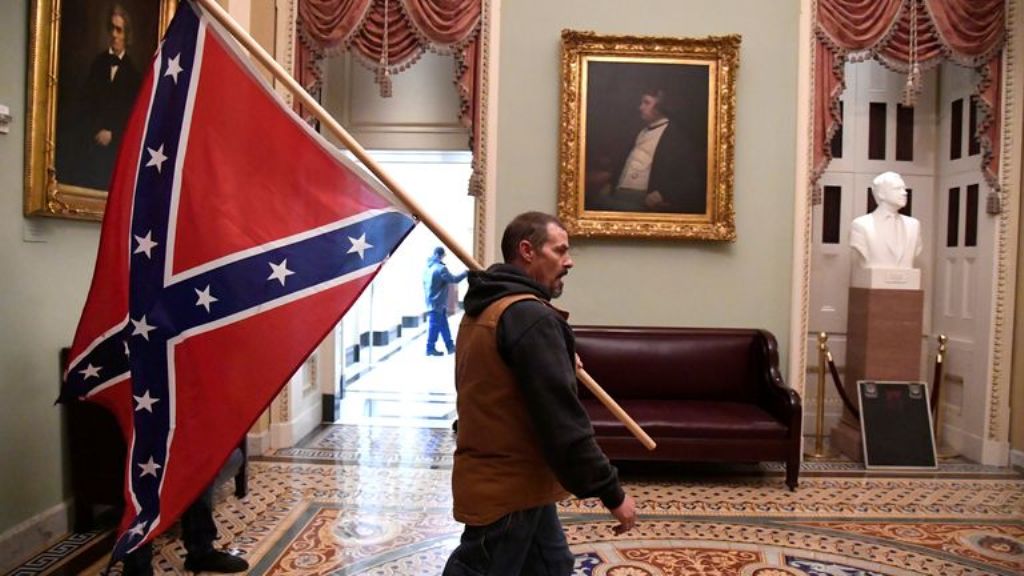 Thousands of Trump supporters answered his call last Wednesday to march on Congress, while senators inside tried to confirm the electoral counts that will end his presidency on the 20th of January. The bloody insurrection that followed left five people dead. A former member of the US military was killed by a bullet to the neck as she tried to jump through barricaded doors in pursuit of terrified Congressmen, and a policeman died after being hit in the head with a fire extinguisher. Overcoming the building’s inadequate defenses, protesters smashed windows, overran the seat of US democracy, looted some of its treasures and took selfies glorifying their actions. Senior Republicans from state legislatures and former military officers were amongst those involved in the violence, and a rope tied into a noose was hoisted at the entrance to Congress as a symbol of their feelings towards those inside. Trump has been claiming for weeks that the election was stolen from him, and yet the courts and the state legislatures rejected his claims, and finally Trump implored Vice President Mike Pence to overturn the election count, but he refused. The US is now engulfed in recriminations.

House of Representatives Speaker, Nancy Pelosi, discussed “precautions for preventing an unstable president from initiating military hostilities or accessing the launch codes and ordering a nuclear strike” with Chairman of the Joint Chiefs of Staff General Mark Milley on Friday morning, and set about organizing a second impeachment vote against Trump for “inciting an insurrection,” even though his presidency is almost over. The Republicans who still control the Senate distanced themselves from Trump’s actions, and some resigned from his cabinet, while others condemned him, but they do not wish to remove him from office. Hours after the storming of Congress, a well-respected ‘YouGov’ poll was carried out showing that 45% of Republicans supported the rioters. Trump was asked to condemn them, but hours after the insurrection began he simply said, “We have to have peace. So go home. We love you; you’re very special. I know your pain. I know you’re hurt. We had an election that was stolen from us.” Trump’s denial of the election result stirred up violent passions amongst his supporters, and Twitter finally announced a permanent ban on Trump’s use of the platform after Trump announced on Twitter that he would not attend Biden’s inauguration ceremony. The social media company and Democrats saw his tweet as a threat of renewed violence, while Trump supporters saw it as another example of liberal media bias against them. Within hours of Trump’s Twitter account being closed, the phrase “hang Mike Pence” was tweeted more than 14,000 times. The US is bitterly divided.

The last outgoing US president to boycott the inauguration of his victorious opponent was Andrew Jackson, in 1868, soon after Lincoln was assassinated and when the bloody wounds of the American Civil war were still fresh. The climate of fear and hatred that exists now is very similar to that which led up to, and which followed, the Civil War. Trump supporters are furious with Republicans who did not give complete support to Trump’s efforts to overturn the election. Chants of ‘traitor’ were yelled at Senator Mitt Romney while he was flying to Washington, and also at Senator Lindsey Graham at Reagan National Airport as he was leaving Washington: one woman wearing a shirt printed with the words “I love Trump” and “QAnon” was filmed shouting, “One day you will not be able to walk down the street. It is today.”

QAnon is a decentralized movement that believes that the US is run by a “deep state” of perverted liberal elites who are conspiring against conservative values. Many individuals from this movement have a huge following on social media. For example, Dave Hays, also known as Praying Medic, tweeted to half a million followers: “The problem with stealing an election and getting caught: Even if you make it into the White House, how do you keep 80 million people from physically removing you?” and later, he wrote: “If you think millions of Americans (many of whom are former military) will passively allow their nation to be destroyed, you’re delusional. If the military does not intervene and if Biden is inaugurated on the 20th, we could be headed for a second revolution.” Many extremist movements and armed militias, such as the ‘Proud Boys,’ have been coalescing around Trump promise to continue the fight to “save America” against sinister forces in government.

Similar mutual distrust, and deep-rooted interests led to the American civil war, whose fire was never extinguished. The Democrat Party was seen as subverting the federal government to maintain the system of slavery, and it was the Republicans who opposed slavery. After a series of Democrat Presidents caused dismay by entrenching slavery, a Republican president opposed to slavery was elected and the Civil War began.  It was fear and hatred of African slaves, and not love for their democratic rights, which motivated the Republican anti-slavery movement of the north. The slaves were a threat to poor Americans seeking to expand westward, and a threat to free workers who feared that they could not compete with free slave-labour. Similar fears have guided Trump’s anti-immigrant and anti-Mexican propaganda. The “Black Lives Matter” movement and other liberal agendas are pitted against poor white workers fearful about jobs and cultural marginalisation. Faces have changed, but old grievances and disparities have boiled over again and will continue to do so.