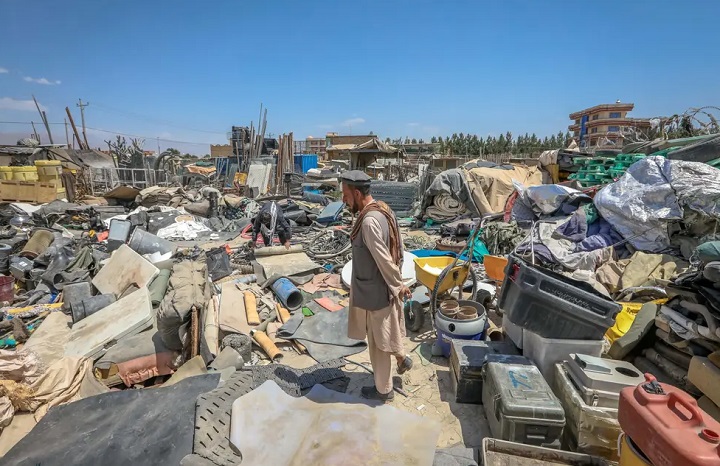 Details:
US Military Abandons Bagram, the Last US Base in Afghanistan
US Airstrikes on Syria-Iraq Border, Indian Mobilisation against China

US Military Abandons Bagram, the Last US Base in Afghanistan
This week the United States abandoned the Bagram Air Base, its last base in Afghanistan, thus effectively ending major US military operations in the country after nearly 20 years of war, in accordance with US President Joe Biden’s decision to withdraw its forces from Afghanistan. America has exited the country far faster than was expected when Biden announced his withdrawal date of 11 September 2021, twenty years after the 9/11 attack that the Bush administration converted into a geopolitical excuse for invading and occupying Afghanistan. When Biden was asked on Friday about this, he said, “We are on track, exactly where we expected to be.” However, as reporters pressed him with further questions, he responded with, “I’m not going to answer any more questions about Afghanistan” and after yet another question on Afghanistan, he refused to answer saying, “I want to talk about happy things, man”.

It took only a few years for America to realise the great mistake it had made in occupying Afghanistan and, shortly after it, Iraq. But it took many more years for America to reverse that mistake. American arrogance after the collapse of the Soviet Union was such that the US thought that it had reached ‘the end of history’ and that the world was now open for it to do as it pleased. But America soon realised the same bitter lessons learnt by European powers in the previous century, who were forced to abandon their colonies first in Muslim lands and then elsewhere. US Defence Secretary Robert Gates said in a prepared speech to military cadets in 2011, “In my opinion, any future defense secretary who advises the president to again send a big American land army into Asia or into the Middle East or Africa should ‘have his head examined’”. Subsequently, America adopted a new style, that of controlling Muslim countries using air power together with the ground forces of other Muslim countries, as it has done in Syria, using the ground forces of Iran and Turkey. It is this style that America seeks to now implement in Afghanistan using Pakistan.

America remains undoubtedly the global superpower, the world’s most formidably military power. But it is necessary to realise that military power has its limits, especially when projected across oceans into a landlocked country like Afghanistan. It is only because of the agent ruling class within Muslim countries that the West continues to interfere in and dominate the affairs of Muslims. The rulers of Muslims today overestimate Western power while underestimating the capability of the Muslim Ummah; they also fail to comprehend the power of the Islamic ideology which elevates those who adopt it fully to be the foremost amongst mankind. With Allah’s permission, the days of these rulers are close to an end; the Muslim Ummah shall soon arise and overthrow these agents and establish in its place the righteous Islamic Khilafah (Caliphate) State on the method of the Prophet (saw) that shall unify Muslim lands, liberate occupied territories, restore the Islamic way of life and carry the light of Islam to the entire world. The Khilafah State shall, almost from its inception, enter the ranks of the great powers because of its immense size, resources, population, geostrategic location and Islamic ideology.

US Airstrikes on Syria-Iraq Border, Indian Mobilisation against China

In pursuance of its current military style for controlling Syria and Iraq, the US military conducted airstrikes again this week at the Iraqi-Syrian border. According to a US Pentagon statement, two sites were attacked in Syria and one in Iraq, targeting militia groups. A Pentagon spokesman characterised the attacks as defensive, saying, “President Biden has been clear that he will act to protect U.S. personnel.” But the question is, if America wants to protect its personnel, then why are they in Syria? Obviously, it is America that is the aggressor here, and it is the Muslims in Iraq and Syria that are defending their lands and their people. America has in fact already organised the major elements in Syria and Iraq according to its plan and objectives, using the forces of others, such as Russia, Iran and Turkey; airstrikes such as those that were undertaken this week are only minor ‘policing’ actions intended to punish smaller groups that fail to properly follow American direction. By doing so, America thinks it has defeated the Syrian revolution but the revolution still exists in the hearts and minds of Muslims and it will soon express itself again, this time through sincere aware leadership that will not make the mistake of aligning with American backed powers as happened before.

In reporting by Bloomberg, India has redirected at least 50,000 additional troops to its border with China taking the total to around 200,000, with the largest increase coming in Ladakh, the territory that the Modi government separated from Indian-occupied Kashmir in 2019 and placed under direct rule from Delhi. This was followed by reporting from the Wall Street Journal, which said on Friday, “China and India have sent tens of thousands of soldiers and advanced military equipment to their disputed border, as troop deployments in the region reach the highest level in decades.” It is America that has pushed the Indian government of Prime Minister Narendra Modi to directly confront China. America has facilitated him in this by stopping Pakistan from engaging in any meaningful reaction against India’s brutality in Kashmir. In his celebration of the centenary of China’s Communist Party this week, President Xi Jinping said, “The Chinese people will never allow foreign forces to bully, oppress or enslave us,” and added, “Whoever nurses delusions of doing that will crack their heads and spill blood on the Great Wall of steel built from the flesh and blood of 1.4 billion Chinese people.” Meanwhile, Pakistan’s Prime Minister Imran Khan, eager to betray not only the Muslims of Kashmir and Afghanistan but also of East Turkestan reiterated this week that he fully accepted China’s version of its brutal and inhumane treatment of Uighur Muslims, saying, “Because we have a very strong relationship with China, and because we have a relationship based on trust, so we actually accept the Chinese version”; “What they say about the programs in Xinjiang, we accept it.” Pakistan and India are supposed to be nuclear powers, but their foreign policies are driven not according to their own interests but according to America’s. It is America that awoke the sleeping Chinese dragon, that the Khilafah State had so calmed many centuries back that the Chinese had dismantled their own navy and withdrawn into their own domestic affairs, unconcerned with the outside world. Now, America wants to antagonise and confront China on every front, inciting it to strike back wherever it can, on land, sea, cyber, air and space. But with Allah’s permission, the re-established Khilafah State shall liberate both Kashmir and East Turkestan along with all other occupied territories, confront and challenge all of the great powers encroaching on Muslims lands and interests, and restore balance, peace and calm to world affairs.