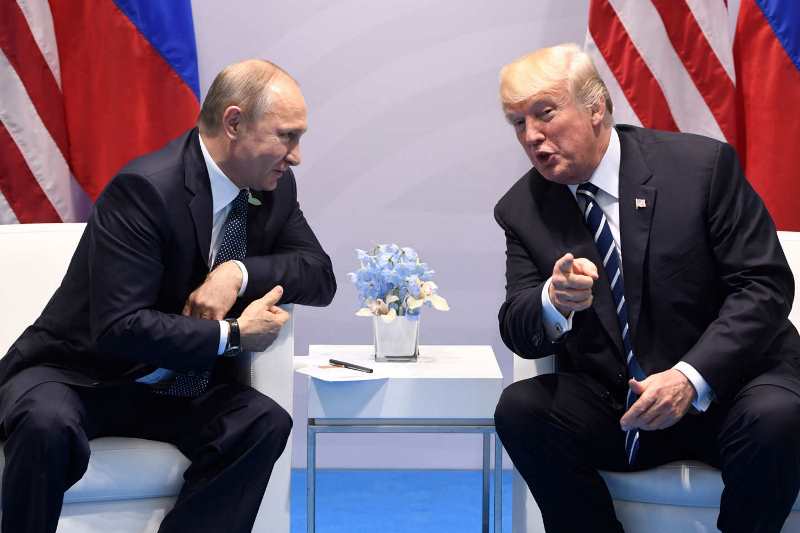 Trump’s First Meeting with Putin dominated by Discussion of Syria

US President Donald Trump and Russian President Vladimir Putin held their first face to face meeting yesterday on the sidelines of the G20 summit that they are both attending in Germany. The two-hour meeting was dominated by discussion of Syria. According to the New York Times:
“The United States, Russia and Jordan have agreed to foster a cease-fire in a limited area of southwestern Syria that will begin at noon on Sunday, Secretary of State Rex W. Tillerson said on Friday after the first face-to-face meeting between President Trump and President Vladimir V. Putin of Russia.

The agreement came after months of negotiations among the three countries. A senior State Department official who was involved in the talks said important pieces of the deal remained to be hammered out in the coming days, including who would monitor and enforce the pause in violence.

“I think this is our first indication of the U.S. and Russia being able to work together in Syria,” Mr. Tillerson told reporters on Friday night in Hamburg, Germany, after the more than two-hour meeting between Mr. Trump and Mr. Putin. “And as a result of that, we had a very lengthy discussion regarding other areas in Syria that we can continue to work together on to de-escalate the areas and violence once we defeat ISIS, and to work together toward a political process that will secure the future of the Syrian people.”

In fact, Trump is continuing the same plan formulated under his predecessor, Barrack Obama, for assigning regions of Syria to different entities, with the Assad regime given full authority over the south-western part of Syria, hence the agreement. There have been many previous ceasefires; the purpose of the present one is not the ceasefire itself but the definition of the region to be assigned to Assad.

The short age of the American empire in the Muslim world is drawing to a close. America cannot single-handedly manage its affairs in Muslim countries but is dependent on many allies and agents to cooperate with it in achieving its purpose. America has not declined in its power. It is the ascendancy of the Muslim Ummah that is frustrating American, and Western, designs throughout the Muslim world.

US uses the Excuse of North Korea for Further Militarisation

The United States portrays itself as innocently responding to unwanted provocations throughout the world. The true reality, however, is that the US has long ago embarked upon world domination, and goes to the extent of creating ‘provocations’ in order to justify its hegemonic expansion. North Korea is just one more example of this, with America forcing North Korea into militarisation so that America can respond with more militarisation. According to Reuters:

The United States plans to carry out a new test of its THAAD missile defense system against an intermediate-range ballistic missile in the coming days, two U.S. officials told Reuters on Friday, as tensions with North Korea climb.

Despite being planned months ago, the U.S. missile defense test will gain significance in the wake of North Korea’s launch of an intercontinental ballistic missile (ICBM) on July 4 that has heightened concerns about the threat from Pyongyang.

The test will be the first of the Terminal High Altitude Area Defense (THAAD) to defend against a simulated attack by an intermediate-range ballistic missile (IRBM), one of the officials said. The THAAD interceptors will be fired from Alaska.

The United States has THAAD interceptors in Guam that are meant to help guard against a missile attack from a country such as North Korea.

America’s target in intensifying conflict with North Korea is actually China. The Trump administration is merely continuing the plan of previous administrations to ‘pivot’ to the Pacific in order to contain the rise of China. Fifty years ago, the Vietnam War was in fact waged for the same reasons – the containment of China; that war was only brought to an end by Nixon’s rapprochement with Mao.

The world will never see peace and stability as long as secular Capitalist imperialist America remains its superpower. In the age of Islam, the entire world was influenced by the Islamic cultural lifestyle (Arabic: ‘hadara’) and balanced material pursuit with ethical, humanitarian and spiritual values. Only the re-establishment of the Islamic Khilafah State (Caliphate) on the method of the Prophet ﷺ can return the world to that ideal.

As the conflict between the Saudi regime and Qatar is further prolonged, British Foreign Secretary Boris Johnson has flown in to attempt to resolve the dispute. According to Reuters:

Britain’s foreign minister Boris Johnson arrived in the Middle East on Friday to meet representatives from Qatar, Saudi Arabia, the United Arab Emirates and Kuwait in a bid to heal a rift between Qatar and other Arab states.

Saudi Arabia, the UAE, Egypt, and Bahrain broke diplomatic relations with Qatar last month and launched a drive to boycott the gas-producing state, which they accuse of supporting terrorism and allying with regional foe Iran.

“The Foreign Secretary will urge all parties to get behind Kuwait’s mediation efforts, which the UK strongly supports, and work towards de-escalation and Gulf unity for the sake of regional stability,” the foreign office said in a statement.

While it is quite evident from Trump’s tweets that Saudi has acted on American prompting, America’s animosity towards Qatar is not because of some principled approach that the Qatari rulers are adopting. In fact, Qatar is one of the last remaining British outposts, created by Britain in the aftermath of the destruction of the Ottoman State and the division of its lands. While Britain works hand-in-glove with America on a variety of issues, Britain and America at the same time clash repeatedly, particularly in the Muslim world, which used to be dominated by Britain but is now dominated by America. Even now, Britain attempts to pursue foreign policy in the Muslim world independently of America, and it is this that is frustrating America. The conflict between Saudi and Qatar is actually a proxy conflict between American and Britain.

The present generation of rulers of Muslims have been chosen for their incompetence, lack of vision, corruption, and total dependence upon Western powers. The Muslim Ummah must reject these leaders completely and turn instead to the sincere, capable leadership already present within its ranks. This leadership will not be found on the state-controlled media platforms but is firmly established within the body of the Ummah and easily discovered by those who wish to see.

Dangerous Muslim extremists have been locked up in Britain’s first “jihadi jail” to stop them brainwashing other inmates. Nearly a dozen terrorists have been jailed in a “separation centre” at HMP Frankland in Durham and isolated from other prisoners. The “prison within a prison” is designed to reduce extremists radicalising other inmates by giving the worst terrorists their own cells, exercise yard and visiting centre. It will make it easier for the authorities to monitor the extremists and reduce the risk of them plotting atrocities behind bars. They will be subjected to intensive de-radicalisation programmes. Lee Rigby murderer Michael Adebolajo and extremist preacher Anjem Choudary could be among them. Others who spread views that might incite others to commit terrorist offences, or who are undermining security in jails, could also be moved to one of the facilities. Prisons Minister Sam Gyimah said the isolation centres were “an absolutely crucial element of our wider strategy to tackle extremism in prisons and ensure the safety of the wider public.”

The Ministry of Justice declined to comment on which prisoners would be shifted to the facilities. Last month, Adebolajo was said to be “brainwashing” fellow inmates in HMP Frankland. The terrorist was described as spending “most of his waking hours preaching his distorted form of Islam to anyone who will listen”, according to the Daily Mirror. The new centre at HMP Frankland was one of the main recommendations of a review which found evidence of “charismatic” prisoners acting as “self-styled emirs” to radicalise other inmates. It also suggested that “cultural sensitivity” among staff towards Muslim prisoners could “inhibit the effective confrontation of extremist views”. The new isolation centres will be used to target all forms of extremism in jails, including Islamist and extreme far-right ideologies. Figures indicate that authorities are managing more than 1,000 inmates who have been identified as extremist or vulnerable to extremism at any one time. [Source: The Daily Telegraph and the Daily Mirror]

Saudi Arabia is ‘at the top of the list’ of countries exporting extremist Islam to the UK, a new report says. The kingdom has engaged in a 60-year, multi-million dollar campaign to advance its extremist brand of Wahhabi Islam in British Muslim communities, according to a study by the Henry Jackson Society. This has been achieved through endowment grants to mosques, the funding of Islamic education institutions and the training of imams, the report authors say. ‘A clear and growing link’ can be drawn between this overseas money, which originates in several Gulf states and Iran, and atrocities in the UK and throughout Europe, the society found.

The report identifies what it calls ‘an intentional and systematic policy’ by these states to ‘advance an illiberal and at times anti-Western version of the Islamic religion’ in Western countries. How much money has been allocated to this effort is unknown because the majority of it remains secret, the report admits, but the amount is though to have increased in recent years. ‘Indications of the kind of influence that such funding can have… can be seen through the prevalence of Islamist extremist preachers and literature, including the use of Saudi school textbooks,’ the report reads. ‘This combined with scholarship programmes that bring clerics to Saudi Arabia for training, has gradually contributed to changing the climate of religious belief and practice in many of the West’s Muslim communities. ‘As well as promoting hardline Wahhabi practices to Muslim communities that formerly identified with other Islamic traditions, this phenomenon has created a challenge for moderate voices and empowered extremists.’

The Henry Jackson Society is calling for a public inquiry into the issue and asks the government to introduce laws forcing Islamic organisation to declare certain types of finance received from overseas, and any conditions placed upon its use. The Home Office already commissioned a closed-door inquiry into funding for Islamic extremist groups in the UK back in 2015 as part of a Coalition deal to expand airstrikes in Syria and Iraq. It was understood that the report would largely focus on Saudi Arabia, but in May this year the Home Office announced the research has yet to be completed. Even if the report is finished, the findings may never be made public because of the ‘very sensitive’ nature of the material, a spokesman said. Prime Minister Theresa May, who visited Saudi Arabia earlier this year, has been accused of ‘kowtowing’ to the kingdom by ‘suppressing’ the report. Tom Wilson, who wrote the report for the Henry Jackson Society, said: ‘There is a clear and growing link between foreign funding of Islamist extremism and the violent terrorism we have witnessed across the UK and Europe.’ The key now is to get ahead of the issue and find out the full extent of what has been going on. A public inquiry would go some way to informing the debate. [Source: Daily Mail]

The report timing coincides with desperate UK efforts to protect Qatar’s growing isolation spearheaded by the Saudi’s under America tutelage. The Anglo-American struggle for the Middle East still continues to create upheavals for the region.

Peace in Afghanistan is only possible if Kabul and Islamabad join forces and put an end to decades of US interference in the region. The practical way to accomplish this feat is through the re-establishment of the rightly guided Khilafah state (Caliphate), which will end cruder interference.