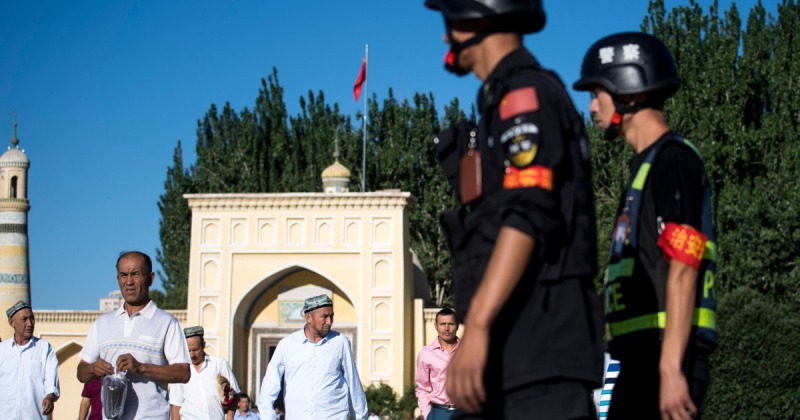 Britain Used to Ask Muslims to Move Here. What Happened to Us?

In the current climate of Islamophobia, I wonder how many British people are aware of a series of films made in the early 1960s, which were expressly designed to encourage people from Arab countries to come to Britain to work or study. The four films, all in Arabic, were made on behalf of the Foreign Office, and all begin with a mosque skyline and melodic chants of “Allahu Akbar”, the start of the Muslim call to prayer. They are unapologetically religious, eager to show Arabic-speaking Muslims how welcoming Britain is, how Islamic institutions exist in Britain to cater to their cultural and religious traditions, as a friendly home from home. Two of the four films are set in London, one in Manchester, the other in Cardiff. The cheerful Egyptian presenter drives from place to place in his Ford Anglia, interviewing local Muslims in their mosques, their offices and their homes. Most of the people we are introduced to are men, but a handful are women, including a Christian convert to Islam, now the proud mother of 10 children, after 16 years of marriage to a Yemeni man in Cardiff. The presenter cuts to the mayor of Cardiff to ask how the Muslim community has integrated. “Very well,” she replies, “they are an integral part of the city. They are accepted as friends amongst the rest of the community.” In London the presenter does a tour of the city’s universities, including Soas and the London School of Economics, where an Iraqi student marvels that his experience is like living in “an international society”. The British government shows “an interest in widening cultural boundaries” that he has observed over the five years he has lived in London. At the Saudi Arabia embassy a Saudi official describes the British people as “polite and patient, with such a big respect for order as to make it almost sacred”. A scholar at the Islamic Cultural Centre by Regent’s Park explains that King George VI gave this land to the Muslim community in 1944, and that a mosque will be built there once the community has gathered enough donations. In Manchester, sometimes dubbed the “Cosmopolitan Cottonopolis”, the presenter enthuses about the city as “one of the biggest trading centres in the world”, where commerce runs in people’s veins. Footage shows people at prayer inside mosques, and young children being taught the Qur’an, before moving on to a library where the presenter is allowed to turn the pages of the “biggest written version of the Holy Qur’an in the world”. The films were designed solely for showing abroad and were probably never seen in the UK at the time.Yet despite such success stories, today more than a third of the UK population believes Islam is a threat to the British way of life, according to a report by the anti-fascist group Hope not Hate. Islamophobia in 2018, according to their findings, replaced immigration as the main factor behind the rise of the far right. In addition, half of Brexit voters in the 2016 referendum and nearly half of Conservative voters in the 2017 general election said that Islam was not compatible with Britishness. The 1960s films were produced in the period following the Suez crisis, as part of an initiative to improve strained relations between Britain and the Arabic-speaking world. If the British government’s policy since 2010 had been to create an inclusive, multicultural society rather than a hostile, nationalistic one, many of today’s political and societal dilemmas might have been avoided. [Source: The Guardian]

Britain has always regarded Islam as its arch enemy and has exploited Muslims to achieve its political and economic objectives. In the 1960s, the British spearheaded campaigns to attract Muslims from the commonwealth to power British industries ravaged in WWII. Today, this policy has been reversed to combat the Islamic revival taking place across the Muslim world and within Britain’s shores.

The United States is scheduled to hold another round of meetings with the Taliban this month in Qatar in a fresh bid to end the deadlock in peace talks with the Afghan insurgent group while reaching out to regional stakeholders, including Pakistan, for assistance. The direct dialogue between the two adversaries began nearly a year ago and has achieved noteworthy progress toward ending the nearly 18-year war in Afghanistan. The process has, however, stalled lately over the Taliban’s demand for all American troops to withdraw from the country before it stops fighting and participates in peace negotiations among Afghans. Washington wants a final deal that covers all the elements before it announces a military drawdown timetable. Ahead of his talks with insurgent interlocutors in the Qatari capital of Doha, chief American negotiator Zalmay Khalilzad traveled Sunday to Islamabad, where he discussed what Pakistan can do to help advance the Afghan peace process, the envoy noted in a post-visit tweet. He did not elaborate. In comments to VOA, sources privy to Khalilzad’s discussions in Islamabad said, “Since the peace process is practically stalemated, he [Ambassador Khalilzad] wants everyone including Pakistan to urge [the] Taliban to demonstrate more flexibility.” As usual, said the source, Washington has “greater expectations from Pakistan but they now realize that Pakistan had no control over the Taliban.” A Pakistani Foreign Ministry spokesman, in a statement issued after Sunday’s talks with Khalilzad, said Islamabad reiterated its commitment for Afghan peace, encouraging “all sides to seize the moment to end the prolonged conflict through a political settlement.” Islamabad takes credit for arranging the ongoing U.S.-Taliban dialogue and had stressed at the outset that achieving desired outcomes would be entirely up to the two negotiating sides. “We have led the horse to water but we can’t make it drink,” said a senior Pakistani official while speaking to VOA at the time.Pakistani leaders also appear uneasy over the lack of progress in the U.S.-led Afghan peace process, and say they are preparing themselves to deal with all eventualities, including no peace deal between the warring sides. “While Pakistan continues to play its positive role toward success of an Afghan reconciliation process and peace in the region, we also stay ready for any unforeseen eventuality,” the Pakistani military chief said during a recent visit to troops on forward posts along the Afghan border. “For this, Pakistan is solidifying border through fencing, construction of new forts and posts and increase in strength of [paramilitary] Frontier Corps troops to effectively manage the border,” noted General Qamar Javed Bajwa.Pakistan, which still hosts nearly 3 million Afghan refugees, was one of the three countries that had recognized the Taliban government in Afghanistan before it was ousted by a U.S.-led military invasion in the aftermath of the 9/11 terrorist strikes against the United States in 2001. Taliban leaders have since allegedly used Pakistani sanctuaries to orchestrate insurgent attacks, charges Islamabad rejects, although it does not rule out the possibility of insurgents using Afghan refugee populations as hiding place. [Source: Voice of America]

It is evident that the US is reliant on both the Taliban and Pakistan to strike a deal. Rather than waste time in negotiations, it is better for both parties to unite and expel America from the region.

For the handful of elderly men inside one of China’s largest mosques, the first bow comes not when prayers begin but as they duck through metal detectors. Lined with facial recognition security cameras both inside and out, Id Kah mosque in Kashgar is under the constant watch of patrolling police officers armed with batons and riot shields.  Ramadan is a quiet, fearful affair in this oasis town on ancient trade routes. Despite mounting international pressure and condemnation, the massive crackdown on the Uighur people and their shrinking culture here shows no signs of abating for the Muslim holy month. Widespread intimidation – from inside mosques to family homes – mean residents don’t dare utter the traditional Islamic greeting, “as-salaam alaikum”, while fasting is also banned, with restaurants forced to stay open. At schools and local authority offices, “the Chinese government provides water, food – lunch – to force you to drink and eat,” said Dolkun Isa, president of the World Uyghur Congress, an advocacy group. Local officials are increasing checks to people’s homes, too, to make sure they aren’t secretly observing the practice, according to a government notice posted online. They’ll even “bring gifts to Uighur families – pork,” Mr Isa told The Telegraph. Although Muslims don’t eat the meat, “you cannot refuse it; you have to accept it, and they are monitoring them and eating together.”   Kashgar lies in the heart of Xinjiang, a far-western region in China home to the Uighurs, an ethnic minority of mostly Sunni Muslims. US officials believe up to three million of them have been locked up in internment camps in what amounts to a virtual whitewash of religion and culture. Former detainees interviewed by The Telegraph have recounted horrific torture, being forced to memorise Chinese Communist Party propaganda, and to renounce Islam. This year’s Ramadan is a far cry from ones in the past – tens of thousands used to flock to Id Kah, spilling out into the public square to pray before boisterous celebrations erupted to break the day’s fast. “‘Sinification’ of Islam means adjusting religion to be comfortable for the Chinese Communist Party,” said Mr Isa. “If Uighurs are thinking, living Chinese, then Uighur culture [will be] all destroyed.” [Source: The Telegraph]

Throughout the centuries various people have tried to eradicate Islam. The Mongols and their Ilkhanate, the Crusaders in Al Sham, the Spanish during the inquisitions, the British in India, and they have all failed to wipe out Islam. The Chinese too will fail, and their efforts will go to waste.