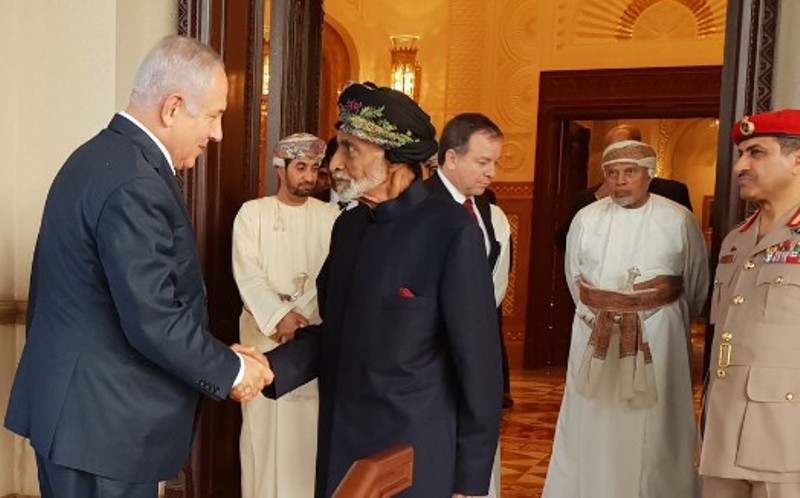 Oman has publicly called on Middle East countries to accept “Israel” after Prime Minister Benjamin Netanyahu made a historic visit to the Gulf state, which has no diplomatic ties with the Jewish entity. In a speech he delivered at the IISS Manama Dialogue Security Summit in Bahrain, Omani Foreign Minister Yousuf bin Alawi said, “Israel is a state present in the region, and we all understand this. The world is also aware of this and maybe it is time for Israel to be treated the same [as other states] and to also bear the same obligations.” Netanyahu travelled to Oman at the invitation of the country’s leader, Sultan Sayyid Qaboos bin Said Al Said, so that the two could discuss regional issues. The visit, which was kept secret until after Netanyahu’s return to the Jewish entity on Friday, October 26th, this came just two days after a Palestinian delegation led by Palestinian Authority President Mahmoud Abbas was in Oman. Oman is relying on the United States and efforts by President Donald Trump in working towards the “deal of the century” (Middle East peace), he added.

Another Conference on Syria

On October 27, the leaders of Russia, Turkey, France and Germany met in Istanbul to discuss a resolution to the Syrian issue. The meeting was designed to complement the Sochi and Astana processes, as a result Russia and Turkey assumed the key roles in mediating the negotiations.

In the concluding joint statement, the leaders called for “an inclusive, Syrian-led and Syrian-owned political process.” This would be laughable if it wasn’t so serious, as the irony of four outside powers calling for a Syrian-led and Syrian-owned political process at a summit where no Syrians were present. Like Astana, Vienna, Geneva and the Riyadh process this conference came amongst the many before them to interfere in the outcome of Syria.

The Fight to own Antarctica

China is planning to build its first permanent airfield in Antarctica on an ice cap in the eastern part of the continent, the South China Morning Post reported. China established its first scientific station in Antarctica in 1985 and now operates four stations there, with a fifth set to be launched soon. China is working to increase its involvement and investment in Antarctica as the great powers continue to pay greater attention to the continent. In addition to scientific advancement and access to resources, Beijing’s involvement in the region will give it the ability to shape the rules and norms that govern the strategic space.