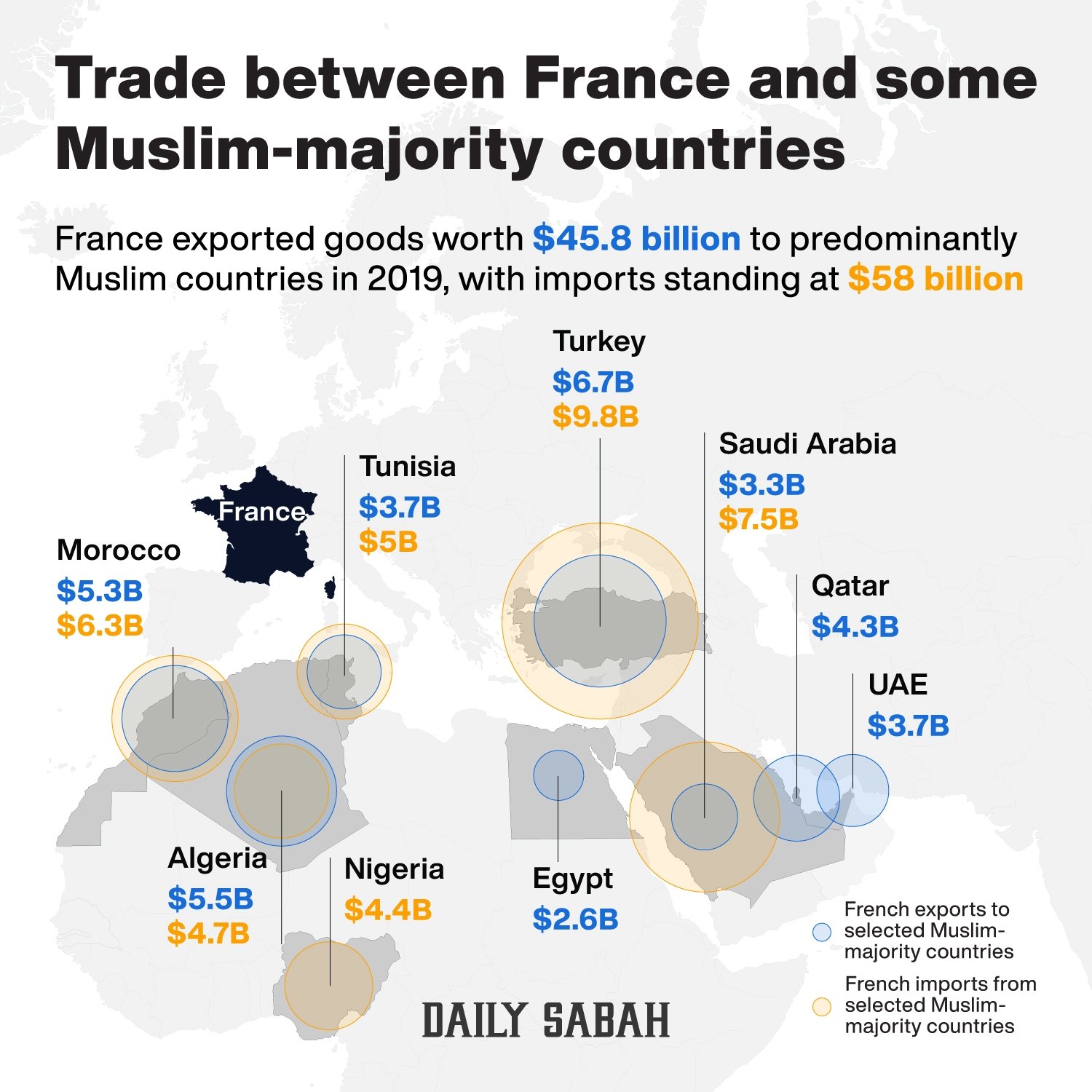 Muslims in the Middle East and beyond broadened their calls for boycotts of French products and protests, as a clash over depictions of the Prophet Muhammad and the limits of free speech intensified. Kuwaiti stores pulled French yogurts and bottles of sparkling water from their shelves, Qatar University canceled a French culture week, and calls to stay away from the Carrefour grocery store chain were trending on social media in Saudi Arabia and the United Arab Emirates. Protests have been held in Iraq, Turkey and the Gaza Strip, and Pakistan’s parliament passed a resolution condemning the publication of cartoons of the prophet. Qatar University postponed its French cultural week indefinitely, saying its administration views insults to Islam and its symbols as unacceptable. In Kuwait, a number of stores had removed French products like Kiri cheese, Perrier sparkling water and Activia yogurt from their shelves. The owner of Carrefour stores in the Middle East issued a statement saying that, in the region, the brand is a fully owned and operated by United Arab Emirates-based Majid Al Futtaim. The company noted that it employs 37,000 people and is “proud to be from the region and for the region.” On Twitter, some criticized what they said is France’s hypocrisy and bias against Muslims. One cartoon widely shared put forth the argument that caricatures of Muslims are defended in “The West” as fair game under freedom of speech protections, while caricatures of Jews are labeled hate speech. Egypt’s top cleric, Sheikh Ahmed el-Tayeb, who is also the Grand Imam of Al-Azhar, Sunni Islam’s highest seat of learning, also accused those who “justify insulting the prophet of Islam” of hypocrisy. Turkish President Recep Tayyip Erdogan has been the most vociferous in his criticism among political leaders, saying Macron needed his head examined and had lost his way. France responded by recalling its ambassador to Turkey. On Monday, Erdogan also called on Turks not to purchase French goods. Both Jordan and Pakistan have summoned the French ambassador in their countries to express their displeasure. Pakistani Prime Minister Imran Khan accused the French leader chose to encourage anti-Muslim sentiment. Amid the political barbs, neither Erdogan nor Khan has publicly condemned the killing of the French teacher. While many Muslims lament the expectation that they must condemn terrorist attacks they see as having nothing to do with Islam or its values, the general secretariat of the 57-nation Organization of Islamic Cooperation was among several bodies and groups that have denounced the killing. Muslim scholars have condemned the caricatures, but some also sought to curb swelling anger. Saudi Arabia’s senior council of clerics issued a statement saying that defamation of the Prophet Muhammad only serves extremists who want to spread hatred. While denouncing insults against Islam, the clerics also cited the prophet’s “mercy, justice, tolerance” in their statement. The head of the Saudi-based Muslim World League, Sheikh Mohammed al-Issa, told a Saudi news channel that while the caricatures are insulting, the prophet’s influence and status are greater than any impact from such drawings. He said Muslims should not overreact. It’s certainly not the first time France has grappled with terrorism — or with questions about free speech. Five years ago, French-born al-Qaida extremists killed 12 employees of the satirical weekly Charlie Hebdo in response to its publication of caricatures depicting the Prophet Muhammad. Those cartoons also sparked mass protests in Muslim-majority countries, with some turning deadly. [Source: AP News]

Boycotting French goods will not stop the insults. The best form of action is to cut off the oil and gas supplies to France, Macron will immediately reverse course and apologize. However, the long-term solution is to expel all crusader forces and their companies from Muslim lands, so as to minimize leverage over the Ummah’s affairs. This can only take place in the Khilafah Rashidah (rightly guided Caliphate) upon the method of the Prophethood under a sincere and aware leadership that will defend the honor of the Messenger of Allah ﷺ at every cost.

Prime Minis­ter Imran Khan on Tuesday reiterated conditional offer of peace to India, saying peace was linked to alleviating suffering of the Kashmiris and settlement of the dispute. “We are ready for peace. But, for that India will have to end military siege of Kashmir and give right of self-determination to the Kashmiris in accordance with United Nations Security Council resolutions,” he said in a video statement on the occasion of Kashmir Black Day. Kashmir Black Day is observed to remember the day Indian forces invaded Kashmir in 1947 and occupied it. Emphasising the need for peace, Mr Khan said the subcontinent needed it the most because it was a pre-requisite for prosperity. The prime minister recalled that soon after assuming office in 2018, he had offered India peace and told the Indian leadership that if they took one step towards peace, Pakistan would take two. But, he regretted, India instead of moving towards peace annexed occupied Kashmir on Aug 5, 2019 and began a new chapter of injustice in the valley. “About 0.9 million troops imposed a military siege on eight million Kashmiris,” he said describing held Kashmir as “an open jail”. He recalled that right of self-determination had been promised to the Kashmiris by the UNSC and promised to continue fighting for the Kashmiris’ right, both internationally and locally, till they got it. “I will keep reminding the world about the tyranny and oppression being faced by the Kashmiris,” he said. The prime minister said India’s state terrorism in held Kashmir was too obvious, where mass graves had been discovered, extra-judicial killings had happened and a media gag had been imposed. Mr Khan said “state terrorism” being perpetrated by India in Pakistan too would be exposed before the world by his government. Meanwhile, the Indian chargé d’ affaires was summoned to the Foreign Office to register protest on the occasion of Kashmir Black Day. “It was demanded that the Indian government give the Kashmiris their legitimate right to self-determination in accordance with the relevant United Nations Security Cou­ncil (UNSC) Resolutions which call for a free and impartial plebiscite under UN auspices,” the FO said. It was further demanded that India rescind its illegal and unilateral actions of Aug 5, 2019, immediately lift its military siege in occupied Jammu and Kashmir and reverse its illegal measures to change the demographic structure of the occupied territory,” the FO added. India was further asked to end extrajudicial killings of Kashmiri youth in fake encounters and so-called cordon-and-search operations and release the illegally detained Kashmiri youth and political leadership. Removal of restrictions on the media, internet and mobile communications in occupied Kashmir and access for independent observers, human rights organisations and international media to the occupied territory was also demanded. The Indian diplomat was told that Delhi’s illegal steps could neither alter the disputed status of the occupied territory nor prejudice the Kashmiri people’s inalienable right to self-determination as enshrined in the UNSC resolutions, for which Pakistan extended the fullest support. [Source: Dawn]

It is very clear that India has no intention of making peace with Pakistan over Kashmir. The only solution to the Kashmir problem is for Khan to mobilise the Pakistani armed forces to liberate Kashmir from the despotic Hindus. But Khan refuses to do this, and now that India has signed a military agreement with America, Khan wants to talk peace. This raises questions about Khan’s motives for ever wanting to liberate Kashmir.

The United States and India have reaffirmed their defensive and security relationship, as Washington continues to rally allies in Asia amid concerns over increased Chinese military activity in the region. During a press conference Tuesday in the Indian capital, US Secretary of Defense Mark Esper and his Indian counterpart Rajnath Singh announced the signing of the Basic Exchange and Cooperation Agreement (BECA), enabling greater information-sharing and further defense cooperation between the two countries. “The defense ties between our two nations remains a key pillar of our overall bilateral relationship,” said Esper. “Based on our shared values and common interests, we stand shoulder to shoulder in support of a free and open Indo-Pacific for all, particularly in light of increasing aggression and destabilizing activities by China.” The agreement, said Singh furthered the two sides ongoing commitment to the “law and freedom of navigation in the international seas” while “upholding the territorial integrity and sovereignty of all states.” Both India and the US are due to participate in the upcoming Malabar naval exercises which will be held in the Indian Ocean next month. The drills will feature all members of the so-called Quad, an informal alliance of the US, India, Japan and Australia, which has been proposed by some as a potential “Asian NATO,” intended to counterbalance Chinese military strength in the region. In a meeting of the Quad earlier this month in Tokyo, US Secretary of State Mike Pompeo railed against the “Chinese Communist Party’s coverup” in the initial stages of the coronavirus pandemic, and saying “it is more critical now than ever that we collaborate to protect our people and partners from the CCP’s exploitation, corruption, and coercion.” Speaking to reporters after that meeting, a senior State Department official said that “there’s no avoiding the fact that it’s China and its actions in the region that make the Quad actually matter and function this time around.” The official said a “sudden turn toward gross aggression by the Chinese government in its entire periphery” had alarmed Beijing’s regional neighbors, and pointed in particular to ongoing tensions between India and China over their shared border in the Himalayas. [Source: CNN]

The agreement signed between the two countries is not a defensive one. On the contrary, it is part of the continuation of Obama’s pivot to Asia strategy. The agreement will enable America to counter China’s expansion in Eurasia and to ensnare China from all sides. In reality, the BECA enables America to pursue its aggressive containment of China.