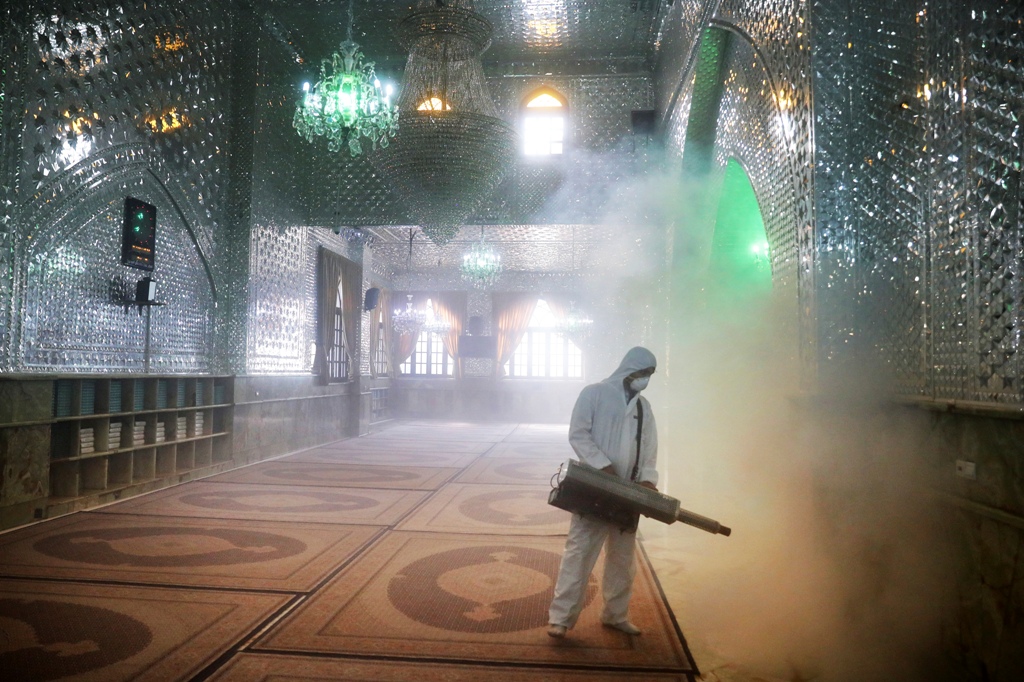 The coronavirus pandemic is the worst global crisis since World War II, United Nations Secretary-General Antonio Guterres said Tuesday, expressing concern that it could trigger conflicts around the world. Guterres said that the scale of the crisis was due to “a disease that represents a threat to everybody in the world and… an economic impact that will bring a recession that probably has no parallel in the recent past.” “The combination of the two facts and the risk that it contributes to enhanced instability, enhanced unrest, and enhanced conflict are things that make us believe that this is the most challenging crisis we have faced since the Second World War,” he told reporters. The New York-based United Nations was founded at the end of the war in 1945 and has 193 member states. “A stronger and more effective response… is only possible in solidarity if everybody comes together and if we forget political games and understand that it is humankind that is at stake,” Guterres added. More than 40,000 people have been killed so far as the disease spreads across the world, and causes economic devastation. “We are far from having a global package to help the developing world to create the conditions both to suppress the disease and to address the dramatic consequences,” Guterres warned, pointing to unemployment, the collapse of small firms and vulnerable people in the informal economy. “We are slowly moving in the right direction, but we need to speed up, and we need to do much more if we want to defeat the virus.” The UN on Tuesday created a new fund to help developing countries after last week appealing for donations for poor and conflict-hit nations. Beyond traditional aid from rich countries “we need to have innovative financial instruments,” so that developing nations are able to respond to the crisis, Guterres said. He warned that the coronavirus outbreak could return from poorer countries, especially in Africa, to hit wealthy countries again, and that millions could die. [Source: Khaleej Times]

Since the inception of the UN in 1945, global cooperation has always been in short supply, especially when it comes to addressing major world issues like nuclear proliferation, climate change and pandemics. The poor response to COVID-19, clearly illustrates that the post war multilateral system has failed, and a new order is likely to emerge.

The Generosity of Pakistanis to Combat COVID-19

Outside grocery stores in Karachi, a remarkable scene has been unfolding over the past two weeks. Instead of rushing home after shopping to avoid being exposed to coronavirus, many Pakistanis are pausing outside to offer food, money or other charity to the many people on the street with no “place” to shelter-in-place. These generous offers are often accompanied with a request to the recipient: “Pray that [the coronavirus] ends soon.” Like many nations, Pakistan has imposed strict containment measures in response to the global coronavirus pandemic, including closing schools, banning public gatherings and shuttering all businesses that don’t sell groceries or medicine. But unlike some other countries that have ordered similar measures, the effects of a prolonged lockdown here could have much more dire economic – and potentially fatal – consequences. In a recent coronavirus-related address to the nation, Pakistan’s prime minister, Imran Khan, stated that “25% of Pakistanis cannot afford to eat two times a day.” As the country issues more stringent lockdown measures and forces people to stay home, many daily wage earners here – from street-food vendors to shoe-shiners – now haven’t earned a rupee in weeks, and they’re going hungry. Amid the pandemic, Pakistanis are bonding together to assist the less fortunate in a unique and inspiring way. Specifically, many are offering zakat, the traditional Muslim charity tax, for daily wage earners who have no paid leave, health insurance or financial safety net. While many around the world are focused on physical cleanliness during the coronavirus outbreak, Dr Imtiaz Ahmed Khan, a molecular biologist at Hamdard University in Karachi, likens zakat to a spiritual cleansing, quoting the popular Pakistani expression, “Paisa haath ki meil hai” (Money is like the dirt on one’s hands). “Zakat removes impurities from wealth,” Dr Khan added. “I am answerable if any of my neighbours go to bed hungry. How can I have an overstocked pantry while one of my neighbours is in need?” According to a report by the Stanford Social Innovation Review, Pakistan contributes more than 1% of its GDP to charity, placing it among “far wealthier countries like the United Kingdom (1.3%) and Canada (1.2%) and around twice what India gives relative to GDP.” And a nationwide study found that 98% of Pakistanis give to charity or volunteer their time – a figure that far exceeds the number of people who are legally obligated to offer zakat. “As a nation, we might not have a lot, but we have big hearts,” said M Sohail Khan, a Pakistani living in Loughborough, UK. “Just visit any village and they will open their homes to you; putting others first is our culture. We’ve seen suffering. We have empathy and compassion. We might even have too much of it, as widespread education will be required to convince the masses that social distancing is not the same as abandoning your neighbour.” As the coronavirus spreads, many Pakistanis have been giving far more than the required 2.5% of zakat, while others who don’t earn enough to qualify for zakat are offering as much charity as they can – and so far, these donations are being mobilised swiftly. [Source: The BBC]

There is truly khair in the Ummah of Mohammed ﷺ. One can only imagine, how the Khilafah (Caliphate) state will intelligently utilize the resources not only liberate Muslims from the imposed condition of poverty, but also set an unrivalled example on how to eradicate global poverty, which the West has only paid lip service to.

Coronavirus: Anger is Growing at China over COVID-19 and its Apparent Cover-Up Attempt

According to reports this weekend, the British government has been told the Chinese may have lied about the extent of their own outbreak by a factor of 40. Precious time was lost for other countries to prepare for the virus and when they did, it seems it was based on fudged figures and dodgy data. The Chinese government appears to have indulged in a Kremlin-style disinformation campaign too. Its foreign minister tweeted about the possibility the “US military brought the virus to Wuhan”. Its online mouthpiece, the Global Times, reported that Italy may have been to blame, producing no evidence whatsoever for the irresponsible claim. China is facing a public relations catastrophe that is only likely to deepen. Western countries have their populations on lockdown, their economies frozen or in freefall, and the country where the virus most likely originated is suspected to have lied, covered up and spread misinformation about its role. It has not helped either that some of the medical supplies sent by China to western countries to help battle the pandemic have been rejected as substandard and potentially dangerous to use. In Britain, there is reportedly rising anger about the Chinese government’s conduct and increasing pressure for a wholesale review of relations with China. Backbench anger may force a rethink on the government’s controversial decision to allow Chinese telephony company Huawei an, albeit limited, role in building the UK’s 5G network. In America, the Trump administration has wasted no time using China as a scapegoat for a crisis that threatens its re-election. Donald Trump’s team may have botched its response but his officials are keen to labour the point when it comes to where COVID-19 is thought to have originated, calling it the Wuhan or China virus. As the death toll mounts that is likely to remain the strategy in the run up to the election in November. The world may need its two greatest powers working together to bring this pandemic under control. There is little sign of that happening for now. [Source: Sky News]

Both China and the West are to blame for the rapid spread of the COVID-19 pandemic. The common factor shared by both is there slow response to address the virus in their respective populations. Additionally, COVID-19 has exposed the fragility of the global financial system to handle the current crisis.