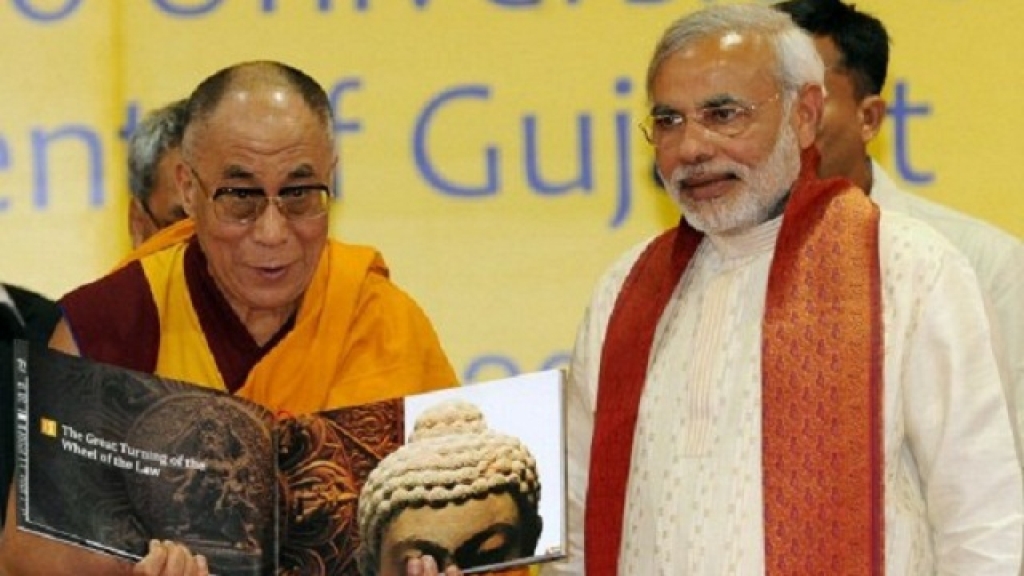 The Dalai Lama insisted Wednesday that “Europe is for Europeans,” warning that if too many migrants are allowed to stay, the continent could become “Muslim” or “African.” The Buddhist spiritual leader, who has been living as a refugee in India since fleeing Tibet in 1959, told the BBC that only a “limited number” of migrants should be permitted to reside in Europe. The 83-year-old said Europe should take in refugees and offer them an education, but then send them back to their homelands. “European countries should take these refugees and give them education and training, then the aim is return to their own land,” he said. The BBC host asked what should happen if migrants want to stay in their adopted countries, to which the Dalai Lama replied: “A limited number is OK, but whole Europe eventually become Muslim country? Impossible. Or African country?  Also impossible.” Asked what was wrong with the scenario of Europe becoming Muslim or African, he said: “They themselves I think better to their own land. Keep Europe for Europeans.” This was not the first time the Tibetan leader has voiced these opinions. In a speech last year in Malmo, Sweden, the Dalai Lama reiterated that migrants should not stay in Europe but should return to help rebuild their own countries. “Receive them, help them, educate them, but ultimately they should develop their own country,” he said at the time. “I think Europe belongs to the Europeans.”[Source: BrietBart]

Islamophobia has spread across the globe and now spiritual personalities from the East have joined West’s crusade against Islam.

British arms sales to Saudi Arabia have been ruled unlawful by the court of appeal in a critical judgment that also accused ministers of ignoring whether airstrikes that killed civilians in Yemen broke humanitarian law. Three judges said that a decision made in secret in 2016 had led them to decide that Boris Johnson, Jeremy Hunt and Liam Fox and other key ministers had illegally signed off on arms exports without properly assessing the risk to civilians. Sir Terence Etherton, the master of the rolls, said on Tuesday that ministers had “made no concluded assessments of whether the Saudi-led coalition had committed violations of international humanitarian law in the past, during the Yemen conflict, and made no attempt to do so”. As a result, the court said that the UK export licensing process was “wrong in law in one significant respect” and ordered Fox, the international trade secretary, to hold an immediate review of at least £4.7bn worth of arms deals with Saudi Arabia. Campaign Against Arms Trade (CAAT), which brought the case against Fox, welcomed the verdict that continuing to license military equipment for export to the Gulf state was unlawful. Thousands of civilians have been killed since the civil war in Yemen began in March 2015 with indiscriminate bombing by a Saudi-led coalition that is supplied by the west and accused of being responsible for about two-thirds of the 11,700 killed in direct attacks. A critical passage in the ruling added that “a close reading” of evidence supplied in secret suggested that in “early 2016” – probably when David Cameron was prime minister – that there had been a covert change of UK policy towards Saudi Arabia. Earlier this month it emerged that Johnson had recommended that the UK allow Saudi Arabia to buy bomb parts expected to be deployed in Yemen, days after an airstrike on a potato factory in the country had killed 14 people in 2016. Labour called for a full parliamentary or public inquiry into arms sales to the Gulf kingdom. The party’s leader, Jeremy Corbyn, said: “UK advice, assistance and arms supplies to Saudi’s war in Yemen is a moral stain on our country. Arms sales to Saudi must stop now.” Lloyd Russell-Moyle, a Labour backbench MP who was in court for the ruling, blamed past and present British foreign secretaries and other ministers for ignoring the evidence of civilian casualties. Focusing on Johnson, the Tory leadership frontrunner, Russell-Moyle added: “This goes right to the top of the Tory party.” The UK has licensed the sale of at least £4.7bn worth of arms to Saudi Arabia since the start of the civil war in Yemen, with most of the recorded sales taking place before 2018. Both Johnson and Hunt have defended the UK’s arms relationship with Riyadh, although other European countries have halted sales. Germany said it would no longer supply arms following the murder of the journalist Jamal Khashoggi by Saudi agents in Istanbul last autumn. [Source: The Guardian]

Irrespective of the type of government in power, the UK has long history of selling arms to Muslim countries so that they can kill each other. The Iran-Iraq war was a boon for the UK defence industry just as Saudi’s war against Yemen is today.

Fitch Solutions, the US-based global research house, has revised down Pakistan’s economic growth forecast, believing tightening of monetary and fiscal policies under the International Monetary Fund (IMF) bailout would negatively impact GDP growth. “We at Fitch Solutions, have revised our forecast for Pakistan’s real GDP (gross domestic product) growth for FY2018/19 (July-June) and FY19/20 to come in at 3.2% and 2.7% respectively, from 4.4% and 4.0% previously (versus the Bloomberg consensus of 3.3% and 3.5%),” the global research house said in a report on ‘Economic Analysis – IMF deal to weigh on Pakistan’s growth in the short run.’ “We believe that the bailout package from the IMF will see tighter monetary and fiscal policies in Pakistan, which will be negative for growth in the near term,” it said. After close to eight months of negotiations, Pakistan reached an agreement with the IMF in May for a $6 billion bailout package to address its balance of payment crisis. Following the agreement, the State Bank of Pakistan (SBP) increased the policy rate by 150bps. Shortly after, the Ministry of Finance presented a budget in June with the aim of trimming Pakistan’s primary deficit to 0.6% of GDP in FY19/20, from 1.9% of GDP in FY18/19 according to the IMF’s estimates. “Given the tighter monetary and fiscal policies amid an already subdued economic growth outlook, we at Fitch Solutions have revised (down) our forecast for Pakistan’s real GDP growth,” it said. Fitch expects consumption (around 82% of GDP) to slow in growth to 5.3% in FY19/20, down from 6.3% in FY17/18 as purchasing power will likely decline. Inflation has been on the rise in Pakistan, increasing by 9.1% year-on-year in May, compared with 4.2% year-on-year in the previous year. “Given our expectations for continued upside pressure on consumer prices over the coming months, we believe that the consumers’ purchasing power will continue to fall over the coming months, thereby weighing on consumption. However, we note that some of the effect of price hikes will be partially offset by the government’s populist measures, such as providing electricity subsidies to consumers who use less than 300 units of electricity per month,” it said. The global research house expects to see little improvement in Pakistan’s net exports, which recorded a deficit of around 11% of GDP in FY17/18. Despite the government’s efforts to increase export competitiveness, such as subsidising electricity and gas to the industrial and export sectors, a global slowdown will likely weigh on exports over the coming months. “Moreover, we believe that imports could increase over the coming months acting as a slight drag on growth,” it said, adding that given Pakistan’s main imports are petroleum and its products (around 28% of total imports), rising oil prices will likely weigh on net exports. “The impact of rising oil prices on imports will be exacerbated by a weakening currency,” it said. [Source: The Express Tribune]

The IMF prescription was meant to induce growth, but the reality is that growth is stunted, domestic industry is weakened and the people are robbed of their wealth.