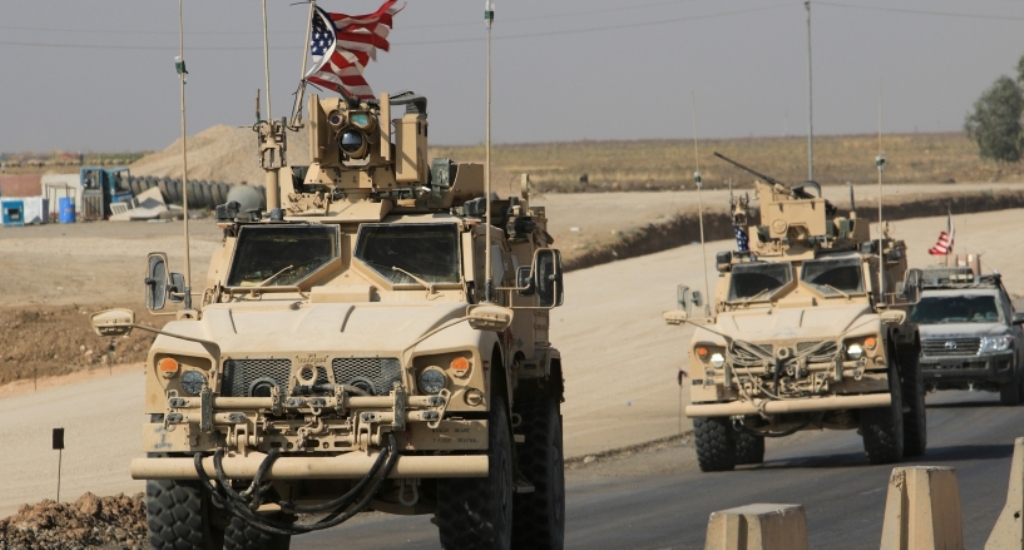 Following US President Donald Trump’s discussion of pulling out American troops from northeast Syria, America is recommitting itself to a long-term presence in Syria in the name of oil. According to the Washington Post:

“President Trump was persuaded to leave at least several hundred troops behind in Syria only when he was told that his decision to pull them out would risk control of oil fields in the country’s east, according to U.S. officials.

Trump had rejected arguments that withdrawing U.S. forces would benefit American adversaries, while endangering civilians and Kurdish allies, but he tweeted Thursday that “we will NEVER let a reconstituted ISIS have those fields.”

Defense Secretary Mark T. Esper confirmed on Friday that troops would remain in eastern Syria to prevent the oil fields from being retaken by the Islamic State.

Speaking at NATO headquarters in Brussels, Esper said that military planners were “considering how we might reposition forces in the areas” and that the deployment “would include some mechanized forces” such as tanks or other armored vehicles and support personnel.”

The West’s true interest in global affairs is the exploitation of the world’s wealth and resources. It was this that originally drove the European powers five hundred years ago to loot, plunder and devastate the lands of America, Africa and Asia, and it is this that motivates the United States today. The West no longer builds formal empires but it has successfully managed to continue its imperialism using other means. Western civilisation is built on the separation of religion from life, leaving worldly affairs to be driven by the pursuit of material benefit alone. Imperialism is the inevitable result of material desires translated to the level of the nation state.

The Khilafah State (Caliphate) continued to be the world’s leading power for over a millennium without exploitative empire building. The Khilafah is a general leadership for all humankind, and not for any single nation. As the Khilafah grew in strength, it naturally expanded its borders with no distinction between Arab and non-Arab, those who were originally part of the state and those who were included later, contributing some of the greatest rulers, generals and scholars in Muslim history. Wealth and resources were always used equitably without exploitation, preserving and safeguarding them for future generations.

With the permission of Allah, subhanahu wa ta’ala, the world’s wealth and resources shall soon be entrusted again to the righteous Khilafah (Caliphate) State on the method of the Prophet ﷺ and Western imperialism in both its overt and covert forms shall be brought to an end.

In mass protests across Lebanon over the past week, demonstrators are calling for the fall of the government as anger builds at official corruption, a stagnant economy and poor services. According to Aljazeera:

In a televised address to the nation on Thursday, Aoun said he was willing to meet demonstrators who have been taking to the streets for eight straight days calling for Lebanon’s post-civil war leadership to be held accountable for years of corruption and economic mismanagement.

The president insisted the government could not be toppled from the streets, but mooted a government reshuffle and pledged to back new legislation aimed at clamping down on corruption, saying the issue had “eaten us (Lebanon) to the bone”.

Aoun also threw his weight behind Prime Minister Saad Hariri’s recently unveiled reform package – which had left protesters’ unimpressed – calling the measures “the first step to save Lebanon and remove the spectre of financial and economic collapse”.

‘He needs to give something’

But at Martyrs Square in central Beirut, where various civil society groups have set up tents, Aoun’s invitation for talks was swiftly rejected.

“It’s not acceptable because it doesn’t fulfil the needs of the people. His speech doesn’t meet the standards that people expect,” said Ali Hoteit, sitting inside a tent erected by a group of army veterans.

Alongside him, half a dozen men discussed politics as music blared in the distance. For them, the message was clear: There will not be any negotiations until the government falls.

It is not only Lebanon but all Muslim countries that face mounting economic difficulties due to Western imperialist exploitation. The economic situation is only mitigated from time to time by temporary cash injections which build an artificial prosperity in order to fuel the next round of exploitation. It is not only particular governments that are at fault but the entire underlying economic system, implanted in colonial times, which Muslim governments continue to implement.

With the dismantling of formal empires, the West created a whole new global financial and economic architecture built on the deceptive concept of ‘free trade’ to be able to continue their exploitation of the world’s wealth and resources. The West never had to account for its imperial legacy, using Western-developed ‘international law’ to whitewash past crimes and justify continued economic interventions. Meanwhile Western countries jealously guard their own economic and financial sovereignty and adopt protectionist measures whenever they desire.

US and China Pursue Trade Settlement despite Ongoing Conflicts

Great powers inevitably have to accommodate each other, and make every attempt to avoid a full-out direct confrontation, particularly in this nuclear age. The USA and USSR were engaged in a cold war for decades without engaging in direct war and spending much of that time collaborating under a policy of ‘détente’. Despite the threat posed to America by the rise of China and the America’s constant berating of China, the two powers are making every effort to work with each other. According to Reuters:

U.S. and Chinese officials are “close to finalizing” some parts of a trade agreement after high-level telephone discussions on Friday, the U.S. Trade Representative’s office and China’s Commerce Ministry said, with talks to continue.

The USTR provided no details on the areas of progress.

“They made headway on specific issues and the two sides are close to finalizing some sections of the agreement. Discussions will go on continuously at the deputy level, and the principals will have another call in the near future,” a statement said.

Washington and Beijing are working to agree on the text for a “Phase 1” trade agreement announced by U.S. President Donald Trump on Oct. 11. Trump has said he hopes to sign the deal with China’s President Xi Jinping next month at a summit in Chile.

In a separate statement posted on China’s Ministry of Commerce website on Saturday morning, Beijing confirmed “technical consultations” on some parts of a trade agreement were basically completed.

Muslims need to take confidence from such interactions that the existence of other great powers in the world is no obstacle to the re-establishment of their state. The vast resources and geography of the Muslim Ummah coupled with the Islamic ideology make it inevitable that the future Islamic Khilafah will immediately enter the ranks of the great powers, forcing all other powers to review their grand strategic thinking and seek out opportunities to collaborate with the nascent state. Muslims have no obstacle to re-establishing their state except the limits of their own imaginations. إِن يَنصُرْكُمُ اللّهُ فَلاَ غَالِبَ لَكُمْ وَإِن يَخْذُلْكُمْ فَمَن ذَا الَّذِي يَنصُرُكُم مِّن بَعْدِهِ وَعَلَى اللّهِ فَلْيَتَوَكِّلِ الْمُؤْمِنُونَ “If Allah helps you, none can overcome you: If He forsakes you, who is there, after that, that can help you? In Allah, then, let believers put their trust.” [Al-e-Imran: 160]