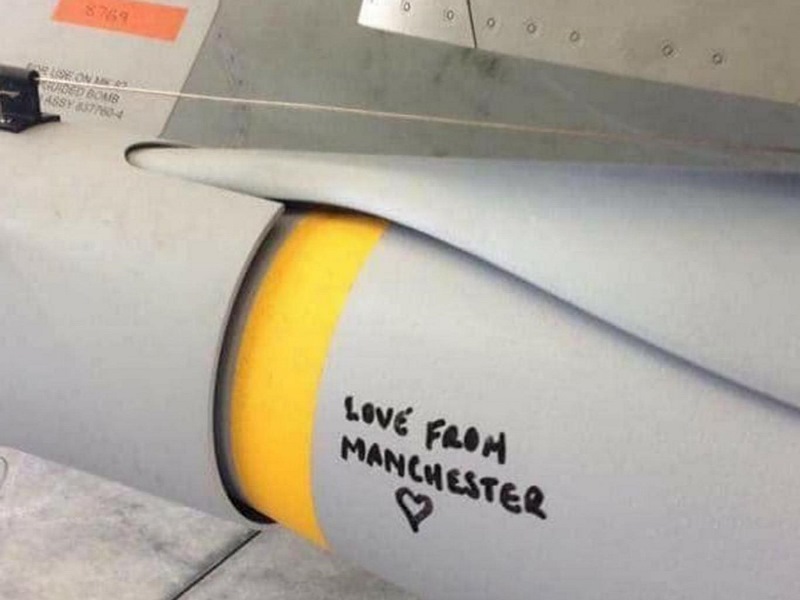 UKIP’s Paul Nuttall has described the decision to launch his party’s manifesto as a message to terrorists “that they will not win”. Mr Nuttall said there was no magic formula to “turning back the tide of radical Islam” – but he said it was a “cancer that needs to be cut out”. He said other parties had been too cowardly to address the problem. Deputy chairwoman Suzanne Evans said Theresa May had “some responsibility” to take for the Manchester bombing. Mr Nuttall said UKIP would beef up security by increasing numbers of police officers, troops and border guards. The Manchester bombing had proved there was no limit to the “depth to which these evil and warped individuals would stoop”, he added. Mr Nuttall said politicians had been weak on tackling the terrorist threat for many years, and attacked Theresa May’s record as home secretary – but he denied a suggestion by BBC political editor Laura Kuenssberg that he blamed the prime minister personally for the Manchester attack. However, Ms Evans, citing Mrs May’s failure to curb immigration, the scrapping of stop and search powers and cuts to police numbers, said the prime minister “must bear some responsibility.” Mr Nuttall said anybody who left the UK to fight for so-called Islamic State should forfeit their passport and never be allowed to return. The UKIP leader promised 20,000 extra police officers, 20,000 extra troops, 7,000 extra prison officers and 4,000 extra border guards. [Source: BBC News]

UKIP despises Islam and under the veneer of tacking terrorism, Mr Nuttall wants to rollback Islam in Britain.

The visit to NATO headquarters in Brussels – part of the President’s first foreign trip – was expected to be thorny given that Mr Trump has praised the Brexit vote for the UK to leave the EU and called the 28-member alliance “obsolete” several times in the past.  There had been conciliatory remarks in recent days about the need for Mr Trump and his NATO allies to work together, particularly in light of the terror attack in Manchester, but Mr Trump pulled no punches in remarks in front of the other leaders and set the stage for a frosty meeting. His stance on NATO seemed to soften after personal meetings with German Chancellor Angela Merkel and NATO Secretary General Jens Stoltenberg in Washington. However, Mr Trump went on the offensive again on Thursday. Mr Trump said that the payments should be increased by other members in order to “make up for the years lost”. “I have been very, very direct … on what 23 of the 28 members … should be paying for their defence,” he said. “This is not fair to the people and taxpayers of the United States,” Mr Trump said, adding that many member nations owe “massive amounts of money from past years and not paying in those past years”. “If NATO countries made their full and complete contributions, then NATO would be even stronger than it is today, especially from the threat of terrorism,” Mr Trump added. The spending issue is just one of the issues surrounding the meeting, with many NATO nations concerned by Mr Trump’s dallying over his commitment to the alliance’s mutual defence pact, known as Article 5. Asked about Mr Trump not explicitly affirming US support for Article 5, White House press secretary Sean Spicer said: “It goes without saying. His presence at this event underscores our commitments and treaty obligations.” European and NATO allies of the US have also sought clarification over other issues – including the Paris global climate change agreement which Mr Trump has not ruled out withdrawing from – and the actions of Russia and the potential threat to nations near the country’s borders. On Thursday morning, Mr Trump met with European Council President Donald Tusk, who said although the two agree that efforts to fight terror groups like Isis should be increased – with NATO allies set to agree to join the US-led coalition against the terror group – there were still major differences on important topics. “Some issues remain open, like climate and trade. And I am not 100 per cent sure that we can say today – we means Mr. President and myself – that we have a common position, common opinions about Russia,” said Mr Tusk.  [Source: The Independent]

America is finding the burden of maintaining global hegemony too much and is looking at allies around the world to pay for the cost of security. The Saudi royal family paid America $350b to protect them from their people, and now Trump is asking NATO to pay for security. Incidentally, if NATO members do not pay up, then Trump could be inviting Russia to invade Europe.

Trump Plans to Convert Military Aid to Pakistan into Loans

After neglecting Pakistan’s efforts against terrorism in Arab-American Islamic Summit, US President Donald Trump is considering to convert military aid to Pakistan into a loan, international media reported. Making efforts to decrease spending on diplomacy aid by 29 percent, the Trump administration has proposed the plan in its annual budget to the Congress. Countries are given loans or grants to by US military equipment under foreign military financing. The slash in military aid under the State Department is in part meant to fund an increase in military spending. According to The Nation newspaper, the White House budget documents revealed that total defence spending for the 2018 fiscal year is $603 billion, which is 3 percent higher than President Barack Obama’s proposed defence budget for 2018. The $603 billion includes funding for nuclear weapons programmes at the Department of Energy and other national defence programmes as well as the Department of Defence. The documents showed a decrease of $11.5 billion for State Department and other international programmes in the upcoming fiscal year as compared to 2017. In order to cut spending, the US government would re-shape the way some countries receiving military aid from the US. The State Department decides which countries are given the financing while the Pentagon executes the decisions. Under the Trump proposal, many current grants would instead be converted to loans. “We do change a couple of the foreign military programmes from direct grants to loans,” said Mick Mulvaney, the director of the White House Office of Management and Budget, in a briefing with reporters on Monday. “Our argument was instead of … giving somebody $100 million, we could give them a smaller number worth of loan guarantees and they could actually buy more stuff.” The Wall Street Journal, which first reported the proposal, said the foreign military grants could affect Pakistan, Tunisia, Lebanon, Ukraine, Colombia, the Philippines and Vietnam. Mulvaney said that military aid to Pakistan would be cut, though he did not give concrete details. [Source: Daily Pakistan].