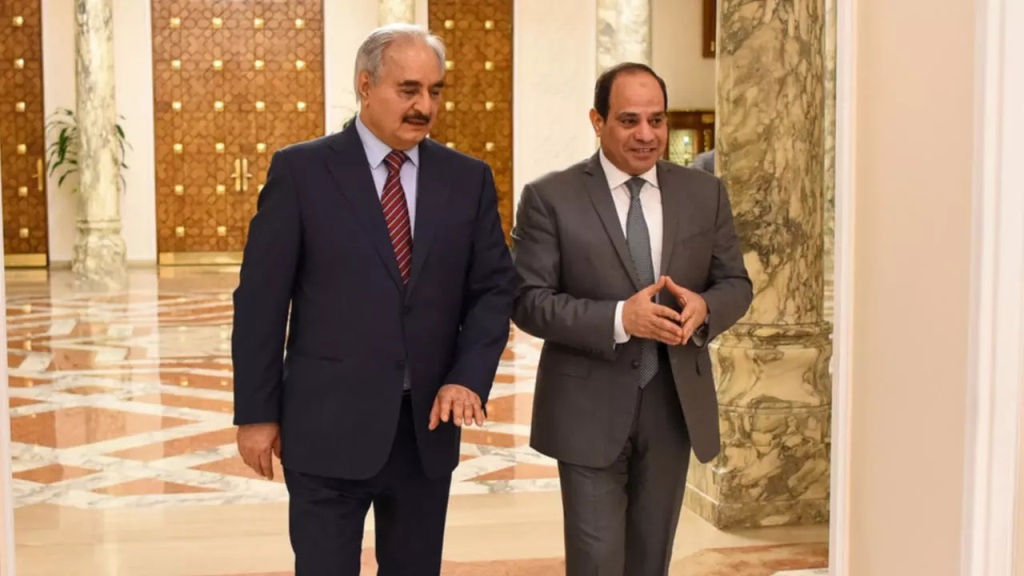 According to Middle East Monitor:

The Egyptian parliament agreed on Monday to authorise President Abdel Fattah Al-Sisi to send the army on combat missions abroad to “defend Egyptian national security”. The move came as the date approaches for the military operation expected to be launched by the internationally recognised Government of National Accord (GNA) to liberate the cities of Sirte and Al-Jafra from the forces loyal to renegade Field Marshal Khalifa Haftar and his mercenaries.

Analysts believe that this strengthens the possibility of a clash between Turkey and Egypt in Libya, prompting speculation about possible scenarios in the event that the Egyptian army does cross into its North African neighbour. How will Ankara respond to Egypt’s intervention targeting Turkey’s military presence in Libya and its GNA ally in Tripoli?

If the Egyptian army does enter Libyan territory to support Haftar’s forces, the crisis would not be between Egypt and Turkey, but between Egypt and Libya. In other words, the confrontation will not be Arab-Turkish, but Arab-Arab. It will be between forces supporting revolutionaries and mercenaries accused of war crimes and grave violations against civilians, and legitimate forces of a government that represents the Libyan people and is recognised by the UN. Egyptian soldiers will not be facing Turkish soldiers, they will face Libyans, the heirs of the legendary freedom fighter Omar Al-Mukhtar.

What is happening in Libya is a repeat of what happened in Syria. America is fearful of deploying its own forces in Muslim lands, after the trauma of Iraq and Afghanistan, and so is depending on the armies of its agents in Muslim countries to undertake invasions on its behalf. In Syria, America primarily used Turkey and Iran, while in Libya, America is using Turkey and Egypt. Russia has had a role in both conflicts but the Russians are also non-Muslim and afraid of deploying ground forces in Muslim lands.

The question is, if Muslim forces are more powerful than those of the non-Muslims, at least within their own geography, then why do Muslim states continue to obey Western commands? Muslims require new leadership that follows only Islam and is willing to depend only upon Allah and to sincerely serve the Muslim Ummah.

US and Russian officials will meet in Vienna on Monday to discuss whether and how to regulate the militarisation of space, in the wake of an alleged Russian satellite-launched missile test.

The two governments agreed to hold a “space security exchange” in January, but the meeting was put off as a result of the pandemic.

It is due to take place in the Austrian capital just days after US Space Command accused Russia of testing a space-launched projectile from one of its satellites. It also claimed Russia had conducted a similar test in 2017. Russian routinely insists its activities in space are entirely peaceful.

Christopher Ford, the US assistant secretary of state for international security and non-proliferation, said: “Our hope is that this meeting will allow us to explore ways to increase stability and security in outer space, as well as to advance the cause of developing norms of responsible behavior in that vital domain.”

The diplomats, generals and space scientists due to meet in Vienna “can look into making it clear that outer space is not a lawless and ungoverned territory but in fact is, one in which, in wartime for example, all the usual international humanitarian law or law of armed conflict rules will apply there as well”.

However, the US is opposed to negotiating a treaty limiting military activities in space.

Western powers will stop at nothing in their drive to militarise anything and everything because their ideology of Capitalism compels them towards the exploitation of the wealth and resources of the entire world and even beyond. The reason for this is that Capitalism is built on a secular world view that considers rational thinking to be limited to the life of this world alone, and any notions of an Afterlife to be entirely speculative, so fulfilment and success is seen only in worldly material terms. This contrasts with Islam, which gives equal weight to the ethical, the humanitarian and the spiritual along with the material because it is built on a worldview that considers the existence of the next life to be definitive and not speculative. The Islamic Khilafah (Caliphate) State throughout its centuries avoided arms wars and worked to contain, calm and stabilise world conflicts, always promoting diplomacy above military engagement. It was only after the fall of the Islamic State from its position as a leading power in the 18th century that the world turned to militarisation and weapons of mass destruction, leading ultimately to the two world wars, the decades’ long cold war and now the beginnings of a new major conflict between America and China.

European Union Stimulus Package a Political Move Not an Economic One

According to the New York Times:
After days and nights of rancorous haggling, European Union leaders reached an $857 billion pandemic recovery plan on Tuesday that, for the first time, committed them to borrow money collectively and distribute much of it as grants that do not need to be repaid by the countries hardest hit by the virus, like Italy.

But as the dust settled after the marathon negotiations — the European Union’s longest summit meeting in 20 years — the compromises that allowed Chancellor Angela Merkel of Germany, whose country holds the E.U.’s rotating presidency, to guide 27 nations toward consensus became all the more apparent, and none were too pretty.

The fissures in the bloc that Ms. Merkel needed to bridge ran up, down and sideways. There were divides between the frugal north and a needy, hard-hit south; but also west to east, between Brussels and budding autocracies like Poland and Hungary that have tested the limits of the bloc’s liberal democratic values.

The stimulus package finally agreed by the EU is in fact much too small to be of practical assistance when divided out between 27 European countries, who are in fact committed to budget austerity rather than actually spending on their peoples. The only reason Merkel has been championing this is to prevent the European Central Bank from undertaking its own initiative, as Germany has far more influence over the EU, whose current head is an ex-minister from Germany, than the ECB headed by Christine Lagarde, the former IMF head.

Western countries are deeply divided. The only reason that they dominate the world is because of the absence of Islam at the state level. It is incumbent upon Muslims to re-establish their state, not only for themselves, but to provide leadership and guardianship for the entire world. Allah (swt) says: كُنتُمْ خَيْرَ أُمَّةٍ أُخْرِجَتْ لِلنَّاسِ تَأْمُرُونَ بِالْمَعْرُوفِ وَتَنْهَوْنَ عَنِ الْمُنكَرِ وَتُؤْمِنُونَ بِاللّهِ وَلَوْ آمَنَ أَهْلُ الْكِتَابِ لَكَانَ خَيْرًا لَّهُم مِّنْهُمُ الْمُؤْمِنُونَ وَأَكْثَرُهُمُ الْفَاسِقُونَ “You are the best nation produced [as an example] for mankind. You enjoin what is right and forbid what is wrong and believe in Allah. If only the People of the Scripture had believed, it would have been better for them. Among them are believers, but most of them are defiantly disobedient.” [Al-i-Imran: 110]