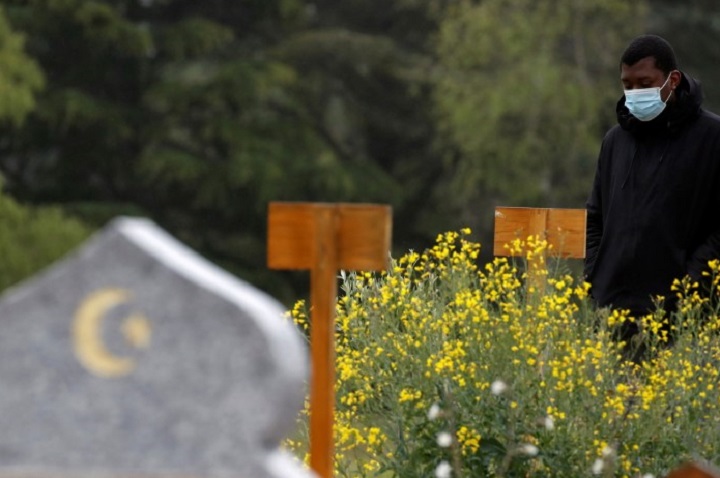 While France is estimated to have the European Union’s largest Muslim population, it does not know how hard that group has been hit: French law forbids the gathering of data based on ethnic or religious affiliations. But evidence collated by Reuters – including statistical data that indirectly captures the impact and testimony from community leaders – indicates the COVID death rate among French Muslims is much higher than in the overall population. According to one study based on official data, excess deaths in 2020 among French residents born in mainly Muslim North Africa were twice as high as among people born in France. The reason, community leaders and researchers say, is that Muslims tend to have a lower-than-average socio-economic status. They are more likely to do jobs such as bus drivers or cashiers that bring them into closer contact with the public and to live in cramped multi-generational households. “They were … the first to pay a heavy price,” said M’Hammed Henniche, head of the union of Muslim associations in Seine-Saint-Denis, a region near Paris with a large immigrant population.

The unequal impact of COVID-19 on ethnic minorities, often for similar reasons, has been documented in other countries, including the United States. But in France, the pandemic throws into sharp relief the inequalities that help fuel tensions between French Muslims and their neighbours – and which look set to become a battleground in next year’s presidential election. President Emmanuel Macron’s main opponent, polls indicate, will be far-right politician Marine Le Pen, who is campaigning on issues of Islam, terrorism, immigration, and crime. Asked to comment on the impact of COVID-19 on France’s Muslims, a government representative said: “We don’t have data that is tied to people’s religion.” [Source: Reuters]

France claims to be founder of liberty and religious freedoms but in practice the French state is racist and treats Muslims and other ethnic minorities as substandard class of French society.

The International Monetary Fund (IMF) is holding open, constructive discussions with Pakistan as part of a sixth review of the country’s 39-month, $6 billion financing programme that began in 2019, IMF spokesman Gerry Rice said on Thursday. Rice declined to say if disbursements under that programme had been halted but said further discussions were needed about Pakistan’s fiscal spending plans, structural reforms, particularly in the tax and energy sectors, and social spending. IMF staff were unable to complete the talks during a recent mission, but the global lender remained “fully engaged” and aimed to resume the discussions in the period ahead, Rice told a regular IMF briefing. “We stand ready to continue to support Pakistan,” he said. “As the recovery gains strength, it will be important to accelerate the implementation of policies and reforms needed to address some of the long-standing challenges facing the Pakistani economy.” Pakistan this month set a target of 4.8 per cent growth in gross domestic product for the 2021-22 financial year and a fiscal deficit target of 6.3pc. The country surpassed growth projections in the 2020-21 financial year despite a third wave of Covid-19 infections, reaching GDP growth of 3.96pc, after a 0.47pc contraction in 2019-20. Earlier this month, Finance Minister Shaukat Tarin had said it was not possible for Pakistan to get out of the IMF programme at a time when the economy is reviving. “It is not possible to get out of the IMF programme at this time,” Tarin had said, adding: “We were forced to go to the IMF.” “This time the IMF was not friendly with us and the programme was front-loaded and tough,” he further said, comparing the current programme to previous ones with the lender. He said that the power sector measures would be sustainable and will increase revenue. “This is what IMF wants from Pakistan,” he had remarked. [Source: Dawn]

Despite admitting that the IMF programme is tough on Pakistan, Khan’s government continues engage the IMF, which have has already wreaked havoc on the economy. Further implementation of IMF conditions will only erode Pakistan’s economic sovereignty.

As the two countries jockey for economic, technological, geopolitical and even ideological superiority on Earth, space has become a natural extension — and crucial frontier — in their great power competition. And due to the inherent dual-use nature of space technologies, what’s at stake extends far beyond mere scientific prestige and global standing. In addition to national defense, so much of our life on Earth — from digital communications to navigation — depends on satellites in space. Following the demise of the Soviet Union’s space program, the US has enjoyed a period of unparalleled leadership in space. But in recent years, US observers and politicians have warned that America’s dominance could soon be challenged by China’s fast-growing space capabilities. That concern has only deepened with a series of important and high profile Chinese achievements: In 2019, it became the first country to land on the far side of the moon; last year, it successfully put into orbit its final Beidou satellite, setting the stage to challenge the US Global Positioning System (GPS); and last month, it became the only country after the US to put a functioning rover on Mars. That particular breakthrough prompted NASA’s new administrator Bill Nelson to warn against American complacency in face of China’s space ambitions. At a House hearing last month, he held up an image taken by the Chinese rover on Mars, called China “a very aggressive competitor,” and lobbied Congress to fund NASA’s plans to bring humans back to the moon. Despite its advancements, China’s space technology still lags behind the US. But China’s space program is flush with political and monetary support from the ruling Communist Party, which views its success as a key measure of its intentional standing and domestic legitimacy. Last week, US-China competition in space entered a new phase when three Chinese astronauts arrived on the country’s still-under-construction space station for a three-month stay. The only other space station in orbit is the International Space Station (ISS), a US-led collaboration with Russia, Europe, Japan and Canada. [Source: CNN]

America is paying the price for its failure to contain China. Ever since, US President Clinton supported China’s entry into the WTO (World Trade Organization), the country has grown from strength to strength, and has challenged the US in all walks of like. The latest is the space competition between the two countries.