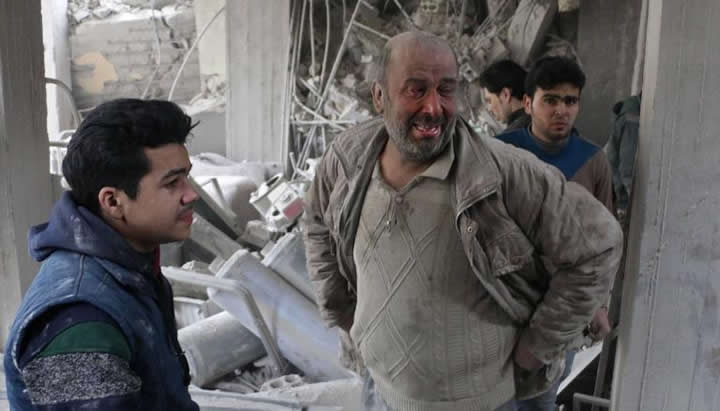 As Eastern Ghouta in Syria has come under horrific attack by Syrian government forces, the UN Security Council continues to delay agreement on a ceasefire. According to BBC news:

The UN Security Council is struggling to agree a resolution seeking a ceasefire in Syria and has put back a vote until Saturday.

The vote has already been delayed several times since Thursday.

Russia wanted changes to a draft that calls for a 30-day calm to allow for aid deliveries and medical evacuations.

Western diplomats have accused Russia, Syria’s key ally, of stalling for time. France said failure to act may spell the end of the UN itself.

Minds have been focused amid outrage at the plight of civilians in the Eastern Ghouta rebel enclave.

Activists say 462 people have now been killed there this week.

Warplanes maintained the bombardment on Friday, witnesses said. Douma and Hamouriyeh were among areas hit.

Western powers suspect that Moscow wants to give Syria time to deal a final blow to forces defending the rebel-held enclave on the edge of Damascus.

The United States, the UK and France had called for the resolution to be approved without delay. UN special envoy Staffan de Mistura said a truce had to be followed by immediate, unhindered access to the Eastern Ghouta.

Commenting on Friday evening, US President Donald Trump pointed the finger of blame firmly at Syria and its allies, Russia and Iran, for the humanitarian crisis.

“What those three countries have done to people over the last, short period of time is a disgrace,” he said, speaking alongside the visiting Australian Prime Minister Malcolm Turnbull in Washington.

In fact, US President Donald Trump has no right to protest as America is equally guilty of what it is criticising Russia for. Firstly, delaying ceasefires is also a standard western military tactic, used to confirm victories and prevent opposition backlash. Therefore they are meticulously timed to coincide with achieving results on the ground. Clearly, Russia is not ready for a ceasefire yet because it has still to undertake more destruction in Ghouta to fulfil its military objectives there. Secondly, it is America that brought Russia into Syria to support Assad against the revolution because America was fearful of sending its own forces in to fight against Muslims after American suffering in Iraq and Afghanistan, so how can America blame Russia for what America itself wants Russia to do.

Even though North and South Korea are engaged in a significant diplomatic initiative, America continues to work to intensify the Korean conflict. According to Reuters:

The Trump administration and key Asian allies are preparing to expand interceptions of ships suspected of violating sanctions on North Korea, a plan that could include deploying U.S. Coast Guard forces to stop and search vessels in Asia-Pacific waters, senior U.S. officials said.

Washington has been talking to regional partners, including Japan, South Korea, Australia and Singapore, about coordinating a stepped-up crackdown that would go further than ever before in an attempt to squeeze Pyongyang’s use of seagoing trade to feed its nuclear missile program, several officials told Reuters.

While suspect ships have been intercepted before, the emerging strategy would expand the scope of such operations but stop short of imposing a naval blockade on North Korea. Pyongyang has warned it would consider a blockade an act of war.

The strategy calls for closer tracking and possible seizure of ships suspected of carrying banned weapons components and other prohibited cargo to or from North Korea, according to the officials, who spoke on condition of anonymity. Depending on the scale of the campaign, the United States could consider beefing up the naval and air power of its Pacific Command, they said.

In truth, the United States is not interested in peace in Korea. The US actively seeks conflict and instability in order to justify militarisation of the western Pacific to deter China from projecting power into the Pacific Ocean. America has never been interested in peace and justice, since its foundation, which was built by European immigrants on the elimination of almost the entire native population of America.

It is becoming increasingly clear that Western civilisation has lost the ideological war to Islam, and is forced to fall back on military measures abroad and security measures at home. France’s Prime Minister Emanuel Macron is just the latest to announce yet more domestic measures against Islam. According to Reuters:

France’s prime minister on Friday announced steps including prison isolation zones and more stringent licensing rules for faith-based schools to combat what he called a slow-burning threat from Islamist radicalization.

In a traditionally Catholic country that is home to Europe’s largest Muslim community, President Emmanuel Macron has already imposed tougher legislation after attacks by Islamist militants killed more than 230 people in the past three years.

But he is under pressure to address voter fears of broader radicalization at mosques manned by radical preachers and prisons that offer fertile ground for proselytizers of a hardline Islam at odds with France’s secular foundations.

Among the measures promised by Prime Minister Edouard Philippe were the creation of isolation zones for Islamist militants in France’s prisons and more scrutiny on the licensing of faith-based schools that opt out of the state-funded system.

“We cannot ignore this slow-burn process,” he told a news conference in Lille, northern France.

“Islamist radicalization is a threat to our society, and not just when it leads to violence. It’s a challenge every time the law of the state is respected only if compatible with religious tenets.”

Western civilisation is built upon a false secular compromise between Christianity and the atheistic values of freedom and democracy. Muslims living in the west, despite being bombarded 24 x 7 with Western hedonistic materialistic culture, have failed to wholeheartedly adopt Western values. If the West was sincere to the truth, then they would return to investigate the ideological basis of their civilisation, instead of imposing it by force upon Muslims.

When Muslims encountered Greek philosophical thoughts, they plunged into deep and unbiased study in order to understand what was correct and what was incorrect from them. Valid subjects such as mathematics, medicine and logic were adopted while so-called Greek rationalism was intellectually exposed for its polytheistic, pantheistic and atheistic falsehood and eliminated from Muslim lands through the intellectual work of great Muslim scholars such as Imam Ghazzali (r.a.) – not simply through the use of force and coercion as practised in the West today against Muslims resident there.