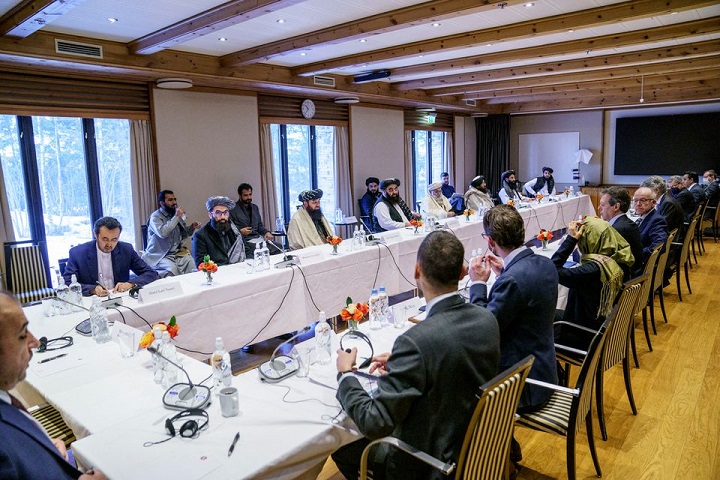 Headlines:
• Boris Johnson tells Tory Rebels ‘bring it on’ as He Vows to Fight for His Job
• Ukraine Crisis Looms Large as China-Russia Trade Tops Record $140bn
• Talks with Taliban Begin in Norway as Humanitarian Crisis Worsens in Afghanistan

A defiant Boris Johnson is clinging on to power, insisting he won’t quit even if his enemies in the Tory party force a vote of confidence in his leadership. The prime minister is determined to fight back, boosted by an apparent split among the Tory plotters on when to launch their coup and on who should succeed him. Mr Johnson’s allies also believe the defection of the Bury South MP Christian Wakeford may have rallied some wavering Conservative backbenchers behind the embattled PM. The PM’s supporters also claim he has bought himself some time, with some of his would-be assassins being persuaded to grant him a reprieve until the Whitehall “partygate” report is published. The report, by senior civil servant Sue Gray, is now not expected until next week and the PM’s allies will now exert massive pressure on rebel MPs to wait until then before they strike. And as the PM battles to survive, some MPs estimate the number of letters to 1922 Committee chairman Sir Graham Brady demanding a confidence vote is now about 30, still well short of the 54 required to trigger a vote. The former Brexit secretary has now told The Daily Telegraph the Conservative Party faces “dying a death by 1,000 cuts” and suffering a year of agony” unless it changes leader. [Source: Sky News]

Johnson has always been a self-indulgent and despicable character who is clearly unhinged and revels in his own glory. But the real story is that the Tory Party could not find anyone else to lead both them and the country. Not only have the standards on leadership selection dropped but the malaise in the UK’s political class is so rotten which underlines Britain’s rapid decline.

Trade between China and Russia is reaching new highs as friction with the West brings the countries closer. Turnover between China and Russia reached a record $146.88 billion in 2021, up 35.8% from the previous year, according to recent data from China’s General Administration of Customs. Although Moscow had yet to release its own final estimate as of publication, its trade representative to China, Alexey Dakhnovsky, told the state RIA-Novosti news agency earlier this month that the figure was indeed expected to have exceeded $140 billion. Next month, Russian President Vladimir Putin is set to attend the opening ceremony of the Winter Olympics in Beijing and meet with Chinese President Xi Jinping. The leaders are expected to sign a number of high-profile political and economic deals, potentially including a final contract for the Power of Siberia-2 natural gas pipeline. Analysts say the standoff between Russia and the West over Ukraine, which could bring new sanctions against Moscow, is likely to tighten the Kremlin’s bond with Beijing even more. Artyom Lukin, a professor of international relations at Russia’s Far Eastern Federal University, told Nikkei Asia that Russian officials were likely consulting with Chinese counterparts about how to mitigate the potential impact of new Western penalties. The Kremlin’s current assertiveness, he argued, indicates that Moscow has some confidence it can rely on Beijing for support. “I think Putin likely received some guarantees from Xi that if a crisis erupts over Ukraine and the West imposes major sanctions against Russia, then China will stand shoulder to shoulder with Russia,” Lukin said. Over the past decade, Moscow and Beijing have sought to supplement political ties with greater economic cooperation. Trade between the two countries has increased by 167% since 2010, with the most significant growth in the past few years. The increase in trade was aided by a series of energy mega projects, such as the $55 billion Power of Siberia-1 natural gas pipeline, the $25 billion Eastern Siberia-Pacific Ocean Pipeline and the $13 billion Amur gas processing plant. [Source: Nikkei Asia].

Many observers have speculated that the Ukrainian issue will strengthen the Russian-Chinese axis. This is unlikely to happen. Russia did not actively support China’s standoff against India at Laddakh, and the same is being reciprocated by Beijing over Ukraine. If the two powers were fully aligned, then a simultaneous invasion of Ukraine and Taiwan would be the ideal scenario for both powers to upend America’s dominance in Europe and the Asian Pacific.

A Taliban delegation led by acting Foreign Minister Amir Khan Muttaqi on Sunday started three days of talks in Oslo with Western government officials and Afghan civil society representatives amid a deteriorating humanitarian situation in Afghanistan. The closed-door meetings are taking place at a hotel in the snow-capped mountains above the Norwegian capital. The first day will see Taliban representatives meeting with women’s rights activists and human rights defenders from Afghanistan and from the Afghan diaspora. Before the talks, the Taliban’s deputy minister of culture and information tweeted a voice message he said was from Muttaqi, expressing hope for “a good trip full of achievements” and thanking Norway, a country he said he hopes will become “a gateway for a positive relationship with Europe.” The trip is the first time since the Taliban took over the country in August that their representatives have held official meetings in Europe. Earlier, they traveled to Russia, Iran, Qatar, Pakistan, China and Turkmenistan. During the talks, Muttaqi is certain to press the Taliban’s demand that nearly $10 billion frozen by the United States and other Western countries be released as Afghanistan faces a precarious humanitarian situation. The United Nations has managed to provide for some liquidity and allowed the new administration to pay for imports, including electricity, but warned that as many as 1 million Afghan children are in danger of starving, and most of the country’s 38 million people are living below the poverty line. The Norwegian Foreign Ministry said the Taliban delegation would also meet with Afghans in Norway, including “women leaders, journalists and people who work with, among other things, human rights and humanitarian, economic, social and political issues.” A U.S. delegation, led by Special Representative for Afghanistan Tom West, plans to discuss “the formation of a representative political system; responses to the urgent humanitarian and economic crises; security and counterterrorism concerns; and human rights, especially education for girls and women,” according to a statement released by the U.S. State Department. [Source: NBC News]

In the era of ruling, it is becoming abundantly clear that the Taliban have not prepared for exercising power. The Taliban are being bullied by the West to change their credentials on several issues before they receive money to avert a humanitarian disaster back home.