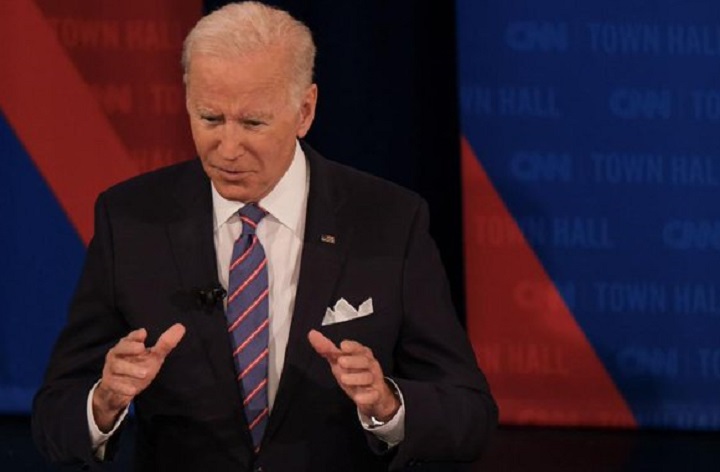 Headlines:
US Support for Sudan in question if Transition Blocked, Special Envoy warns
Tarin Leaves US without Concluding IMF Negotiations
Biden says US will Defend Taiwan if China Attacks

US Support for Sudan in question if Transition Blocked, Special Envoy warns

US support to Sudan could be at risk if the country’s fragile transition to civilian rule is impeded, US special envoy for the Horn of Africa Jeffrey Feltman warned on Wednesday. “If the transition is interrupted, if one side or the other in this [civilian-military] partnership tries to prevail, then the US support for all of these issues, including debt relief, will be in question,” Mr Feltman told The National. The US has this year provided nearly $337 million to support Sudan’s transitional government after the military’s 2019 removal of dictator Omar Al Bashir. But a continuing quarrel between the government and the military has highlighted the frailty of the transition to democratic rule. The two camps engaged in a public and bitter war of words after a failed military coup last month, with each blaming the other for the country’s many woes. Mr Feltman is visiting Khartoum this weekend, his second trip to the Sudanese capital in less than a month, highlighting the level of engagement and concern US President Joe Biden’s administration is dedicating to the situation. “My trip will just reinforce the strong US support for the Sudanese transition, but also make it clear that our continued support depends on that transition moving forward,” he said. “We want to see what we can do to support the forward momentum, the forward progress.” After Al Bashir’s fall, Washington removed Sudan from its list of state sponsors of terrorism and helped Khartoum in its talks with the International Monetary Fund, granting the African nation $50 billion in debt relief and $2.4bn in funding last June. But stubborn troubles including power cuts, medicinal shortages, a devalued currency and rampant inflation have fuelled widespread anger at Sudan’s transitional government, led by Prime Minister Abdalla Hamdok. Large protests are expected in Khartoum on Thursday to call on his government to resign. [Source: The National]

Not so long ago the truce between civil and military leaders in Sudan was brokered by a fragile agreement between US and Europe. Today, the same powers are pushing their respective surrogates to strengthen their positions ahead of crucial decisions to be made by the transitional government. The repeated interference by foreign powers in Sudanese affairs is the main cause of turmoil and destruction for the Sudanese people.

Adviser to the Prime Minister on Finance and Revenue Shaukat Tarin left Washington on Thursday without concluding the talks that could have led to a much-needed endorsement of the government’s economic policies by the International Monetary Fund (IMF). The minister, however, leaves behind Finance Secretary Yousaf Khan to further pursue the talks for the resumption of a $6 billion loan facility that would bring an immediate relief to the cash-starved government by delivering a suspended tranche of $1bn. Mr Tarin first came to Washington in early October and went to New York on Oct 15 after a 10-day stay. He was scheduled to fly to London from there, but returned to Washington on Tuesday as an IMF official said at a news briefing that the talks had progressed to “a very good step.”  Till Wednesday evening, the Pakistan delegation expected a positive outcome and scheduled a news briefing on Thursday morning to share the good news with the media. However, they sent another alert to the media late at night, cancelling the briefing. During his two visits to Washington, Mr Tarin met IMF Managing Director Kristalina Georgieva and other officials twice, and after both meetings each side expressed the hope that the consultations would soon lead to a positive conclusion. They did not. Pakistani officials, however, still insist that it would be a mistake to say the talks had failed. “I think we are in a good place,” said one of them. “We are getting positive vibes.” During Mr Tarin’s second visit, his office shared with the media the copy of a government notification saying that he had now become an adviser. Mr Tarin, who was the finance minister when he first came to Washington earlier this month, is now the financial adviser to the prime minister as he had to be a member of parliament to retain the minister’s position. Although Mr Tarin’s team stayed silent on IMF-Pakistan talks, sources in the Fund said the government was reluctant to take certain steps needed to reduce the ever-widening gap between revenues and expenditure. Apparently, the government fears that such measures could lead to a price hike and inflation and the government could not take such risks so close to general elections. [Source: Dawn]

Despite reassurances that Khan would never beseech the IMF, he along with his government have become beggars running to the IMF to plug Pakistan’s declining foreign reserves. The solution is not to borrow more from the West, but rather cut Pakistan’s links with Capitalism for good.

Biden says US will Defend Taiwan if China Attacks

President Joe Biden said the US would defend Taiwan if China attacked, in an apparent departure from a long-held US foreign policy position. But a White House spokesman later told some US media outlets that his remarks did not signify a change in policy. The US has a law which requires it to help Taiwan defend itself. But it pursues a policy of “strategic ambiguity,” where it is deliberately vague about what it would actually do if China were to attack Taiwan. China has yet to respond to Mr Biden’s comments. At a CNN town hall event, a participant referred to recent reports that China had tested a hypersonic missile. He asked Mr Biden if he could “vow to protect Taiwan”, and what he would do to keep up with China’s military development. Mr Biden responded: “Yes and yes.” He added there was no need to “worry about whether they’re going to be more powerful”, because “China, Russia and the rest of the world knows we’re the most powerful military in the history of the world”. He was then queried a second time by CNN anchor Anderson Cooper if the US would come to Taiwan’s defence in the event of an attack by China. Mr Biden replied: “Yes, we have a commitment to do that.” A White House spokesperson later appeared to walk back Mr Biden’s comments, telling US media outlets that the US was “not announcing any change in our policy and there is no change in our policy”. This is not the first time this has happened. In August, Mr Biden appeared to suggest the same stance on Taiwan in an interview with ABC News. The White House had also said then that US policy on Taiwan had not changed. The US has no official diplomatic ties with Taiwan, but sells arms to it as part of its Taiwan Relations Act, which states that the US must provide the island with the means to defend itself. [Source: BBC]

Ever since America’s humiliating withdrawal from Afghanistan, US allies are seeking reassurances that America is committed to their security. Taiwan, South Korea and Japan, have repeatedly sought guarantees that the US would intervene if threatened by China. What started out as disquiet during the Trump administration has now morphed into a significant security issue in the Asian Pacific region. To shore up security concerns against a more boisterous China, Asian allies are seeking more than words from Biden.