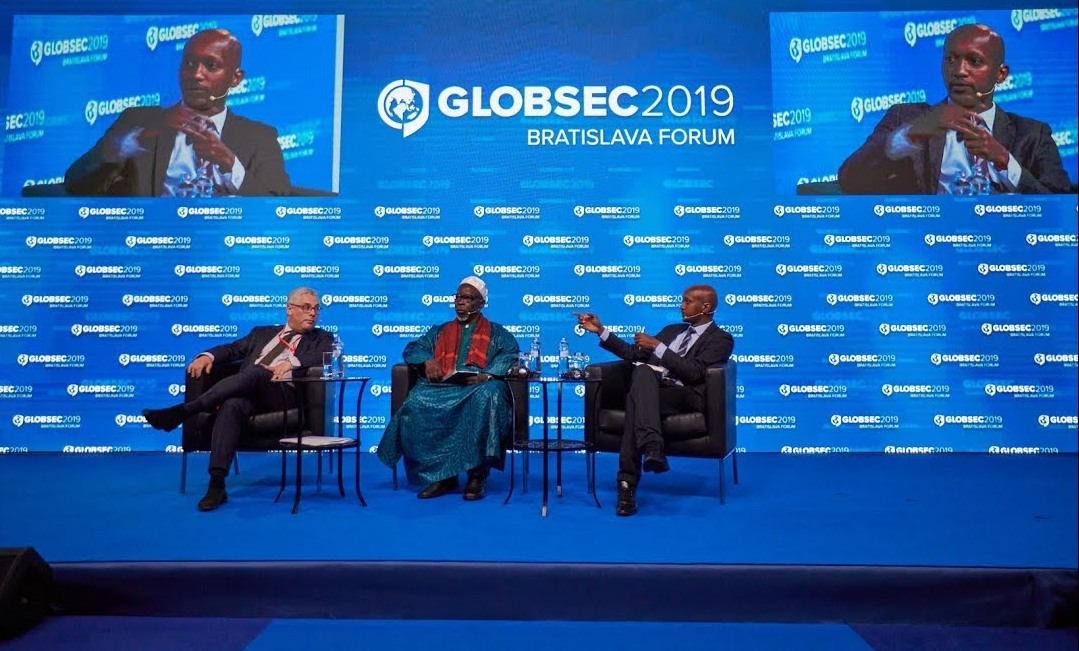 Europeans’ dissatisfaction with a broken traditional political model is being exploited by extremists, creating a distinct new challenge to the continent’s security, the annual Globsec security conference in Bratislava. Experts at a discussion titled Fuel to the Fire: Weaponising Islam in Europe, expressed fears that the manipulation of religious teachings for a political agenda had acquired a new force. States that have been hit by political turmoil have become playgrounds for extremists. “Islam is not a threat to Europe for very historical reasons. Europe has been living with Islam for 500 years,” said Emmanuel Dupuy, president of the Institute for European Perspective and Security in Paris. The politicisation of Islam “is challenging our cultures”, he said. “What is new is some have a political agenda rather than a cultural or social agenda.” Another contributor to the panel, Halkano Abdi Wario of Egerton University in Kenya, said what was developing in Europe had been seen in failed states that collapsed into civil war. “When the state is no longer working well the chances of individuals rising up to instrumentalise Islam is high,” he said. In recent European elections, far-right parties took more votes than the old centrist left and right movements in France and Italy. Mr Dupuy said some European governments had quietly welcomed the exodus of Muslim citizens to areas of conflict where ISIS was spreading its territorial footprint in recent years. That was a miscalculation that avoided tough social adjustments that are needed to heal divisions. “They were content for people to go and live in a place that was split by violence,” he said. [Source: The National]

Fearmongering against Islam is an old European tactic employed to disguise domestic problems and focus on an external enemy—the Islamic world. Pope Orban II stoked similar sentiments when he declared the first crusade in 1095, which instigated war and occupation for almost 200 years. Today, Europe’s elite intentionally provokes fear against Islam to disguise their evil crimes in the name of democracy and freedom to steal the resources of the Muslim world through wars of intervention. The flow of Muslim refugees is a consequence of Europe’s foreign policy, which is conveniently overlooked and the focus shifts towards the loyalty of Muslim communities residing in Europe.

Trump Approves Strikes on Iran, But Abruptly Pulls Back

President Trump approved military strikes against Iran in retaliation for downing an American surveillance drone, but pulled back from launching them on Thursday night after a day of escalating tensions. As late as 7 p.m., military and diplomatic officials were expecting a strike, after intense discussions and debate at the White House among the president’s top national security officials and congressional leaders, according to multiple senior administration officials involved in or briefed on the deliberations. Officials said the president had initially approved attacks on a handful of Iranian targets, like radar and missile batteries. The operation was underway in its early stages when it was called off, a senior administration official said. Planes were in the air and ships were in position, but no missiles had been fired when word came to stand down, the official said. The abrupt reversal put a halt to what would have been the president’s third military action against targets in the Middle East. Mr. Trump had struck twice at targets in Syria, in 2017 and 2018. It was not clear whether Mr. Trump simply changed his mind on the strikes or whether the administration altered course because of logistics or strategy. It was also not clear whether the attacks might still go forward. [Source: The New York Times]

Since the time of Eisenhower, America has relied on Iran and Saudi Arabia to protect its interests in the Persian Gulf. The abrupt pull back is further indication that America is colluding with Iran to manufacture a face saving exit for the regime in Tehran—one that results in abandonment of the nuclear programme and puts an end to the Shia Crescent project.

Conditions Sought by US in IMF’s Bailout Package to Pakistan

Amidst reports that the IMF has reached a multi-billion dollar bailout package with cash-strapped Pakistan, the United States is seeking “conditionality” in the new financial aid from the global lender. Pakistan last month reached an agreement with the Washington-headquartered International Monetary Fund (IMF) for a USD 6 billion bailout package aimed at shoring up its finances and strengthening a slowing economy as tries to overcome a ballooning balance-of-payments crisis. The US has serious reservations over global lenders like the IMF providing a bailout to Pakistan to pay off Chinese debts. “There is a discussion about the conditionality what we think would be appropriate for an IMF package to Pakistan,” according to Senior State Department official (South and Central Asian Affairs) Alice G Wells. Responding to questions from lawmakers during a Congressional hearing last week, she told House Foreign Affairs Subcommittee for Asia, the Pacific and Nonproliferation that while the US has not seen the IMF package yet, there has been an agreement reached between the IMF and government of Pakistan. “But certainly, we have communicated our strong views and Secretary (Mike) Pompeo has also done so publicly on the need for any package to include a real structural reform to reinforce…” Wells said when Congressman Brad Sherman said it looks like that the IMF loan is going through. “Does treasury just do what they want for checking off some economic boxes or since this is the single most important thing we do with regard to Pakistan do they listen to you?” he asked. However, Wells ruled out any effort to block IMF loan to Pakistan until the release of Dr. Shakeel Afridi, the Pakistan doctor who is currently in jail on the charges of helping CIA to find Osama bin Laden. “We believe Dr Afridi is being held wrongly, inappropriately. With Congress’s help, we have withheld USD 130 million in assistance to Pakistan already as a result of his incarceration,” she said. Sherman said that the US aid to Pakistan has dropped by nearly 95 per cent. Our aid to Pakistan less than a decade ago was USD 2 billion a year; we now have cut it to USD 70 million. If I did the math quickly I would just say that’s a 95 per cent reduction roughly. Pakistan I think is very important to the security of the United States. There are those that argue that Pakistan is important because it’s close to Afghanistan and I think it’s just the reverse,” he said. While the US aid is USD 70 million, the IMF loan is USD 6 billion. “I don’t think that could have happened without the US and I hope that when Treasury is over there, the IMF aren’t just checking the boxes for fiscal purposes but are in fact taking policy direction from the State Department,” Sherman added. China is investing heavily in Pakistan under the USD 60 billion China-Pakistan Economic Corridor (CPEC). Launched in 2015, the CPEC is a planned network of roads, railways and energy projects linking China’s resource-rich Xinjiang Uyghur Autonomous Region with Pakistan’s strategic Gwadar Port on the Arabian Sea.Secretary of State Mike Pompeo in the past warned that any potential IMF bailout for Pakistan should not provide funds to pay off Chinese lenders, saying “we will be watching what the IMF does… there is no rationale for IMF tax dollars and associated with that American dollars that are part of the IMF funding, for those to go to bail out Chinese bondholders or China itself”.  [Source: The Print].

It is very clear; America plans to use the IMF to impose a variety of stipulations on Pakistan’s domestic and foreign policy areas. From concessions in Afghan talks to rolling back Chinese influence, the US aims to use Pakistan’s strength to accomplish a variety of strategic goals. Additionally, deployment of Pakistani troops in the Middle East to safeguard American interests in Yemen and Syria falls into the immediate purview of US policy makers and IMF’s role in Pakistan.