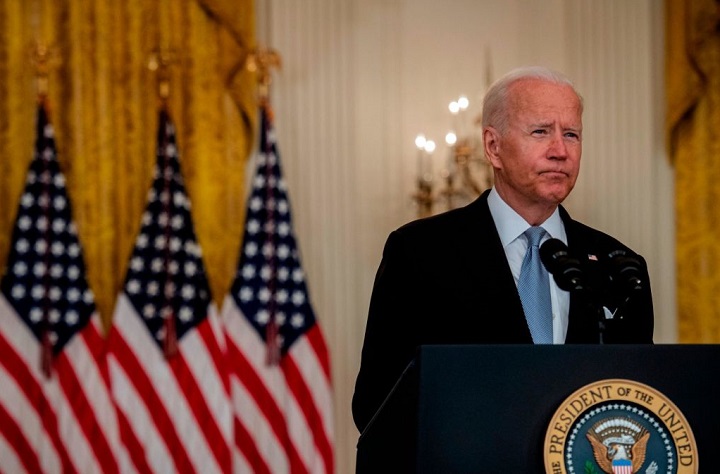 America and its Puppet Kabul Regime are Defeated in Afghanistan

With astonishing speed, the Afghan mujahideen swept the country forcing the collapse of the Kabul regime, with its president quietly fleeing, even though, according to US President Joe Biden speaking on Monday, the Americans had “trained and equipped an Afghan military force of some 300,000 strong — incredibly well equipped — a force larger in size than the militaries of many of our NATO allies.” The Kabul regime fell so quickly because it was an artificial authority created only to mask the real authority, which was that of America. And the so-called Afghan military forces collapsed so quickly because they too were an artificial force, created as an extension, as a front, for the occupying US military. The real question then is not why the fake Kabul regime or the artificial Afghan military forces collapsed but why the Americans were forced to abandon their military occupation.

In withdrawing its forces from Afghanistan, the US has suffered its worst defeat since it rose to the position of global superpower after World War II. In Vietnam, the US was still able to secure major strategic aims in its rapprochement with China, even it if could not succeed militarily within Vietnam itself. But there is no way to describe its Afghanistan campaign except as a complete failure both operationally and strategically, militarily and politically. America has known this since the second term of George W. Bush, the president who ordered the occupation in the first place, but America continued to delay the withdrawal out of embarrassment for its defeat, hoping that some way could be found to somehow achieve some success from it.

In his press conference on Friday, Biden was still trying to defend the withdrawal to an astonished American public who had been led to believe in the invincibility of America, the most advanced and most powerful of superpowers, by returning to the publicly stated reason for going to Afghanistan, “There’s a greater danger from ISIS and al-Qaida and all these affiliates in other countries — by far — than there is in Afghanistan. We’re going to retain an over-the-horizon capacity that if they were able to come back — to be able to take them out, surgically. … So this is where we should be, this is about America leading the world, and all our allies have agreed with that.” But the reality is that America did not go to Afghanistan because of what Biden termed “the threat from terrorism”. In fact, America entered Afghanistan because it provides unique strategic advantage, an exceptional elevated military staging point surrounded by mountains, a natural geological fortress in the sky, overseeing Western, Central and South Asia while also providing a forward base against both of the West’s strategic rivals, Russia and China. Afghanistan, or Khurasan as it is referred to in the hadith of the Prophet (saw), represents one of the greatest of geopolitical prizes but which America in the 21st Century, like the Soviet Union in the 20th Century and Britain in the 19th Century, has completely failed to hold.

With Allah’s permission, the Muslim Ummah shall soon arise and re-establish their Islamic Khilafah (Caliphate) State on the method of the Prophet (saw), as prophesied in reliable hadith, which will unify all the lands of Muslims, including that of Afghanistan, liberate the remaining occupied territories, implement the Islamic Sharia, restore the Islamic way of life, and carry the light of Islam to the entire world.

While the Taliban are still in the process of consolidating control over the country, and have not as yet issued details regarding Afghanistan’s governance, they have made clear that they intend this to be the Islamic Sharia. One of their commanders, in an interview with Reuters also made clear that the Taliban would not implement democracy. These statements are to be welcomed, even if the Taliban have not yet made any commitment towards establishing the Khilafah State. This is because democracy is an alien philosophy of disbelief that even the Christian West had rejected and were only forced to adopt in compromise with the disbelieving materialist insurrection, such as was seen in the French Revolution and the later revolutions across Europe in 1830 and 1848, and which became popular because of the exploitation of the masses by the Western ruling elite. Democracy calls for man to legislate his own affairs in life, whereas true religion calls for man to live his life in accordance with the commands of his Creator. Furthermore, the Western ruling elite quickly realised that real democracy is a practical impossibility as law is a detailed and specialised subject that the general population is unable to meaningfully contribute to; the Western elite were thus able to continue to safeguard their interests and their domination of Western society under cover of what they call ‘Representative Democracy’. Neither democracy nor representative democracy have anything to do with Islam, and it is the Islamic Sharia alone that must be implemented in Muslim lands. The Taliban must be supported for committing to this. But at the same time, it is necessary to understand that the fundamental problem of the Muslim Ummah in this age is not only the liberation of its occupied territories or the domestic implementation of the Islamic Sharia but the absence of the Khilafah State, and the existence of the general leadership for all Muslims, who are commanded to pledge obedience to a single Khalifah. The Prophet (saw) said,

“The Imam is a shield, behind whom you fight and protect yourself” and he (saw) said, «إِذَا بُويِعَ لِخَلِيفَتَيْنِ فَاقْتُلُوا الآخِرَ مِنْهُمَا»“If the pledge of allegiance is given to two rulers [Khalifatain], kill the latter of them”.

It is the imperialist disbelievers who took advantage of the excessive decentralisation of authority within the Muslim Ummah to overpower us and divide us into dozens of nation states on the European Westphalian model. The Muslim Ummah must reject the divisions amongst us, forming a unified Khilafah State that shall, almost from its inception, enter the ranks of the great powers because of its great size, vast population, plentiful resources, geopolitical position and powerful Islamic ideology.

Both China and Russia have stepped in to fill the vacuum left by the withdrawal of the United States. According to the New York Times, China issued a statement on Monday, saying that it “respects the right of the Afghan people to independently determine their own destiny” and will develop “friendly and cooperative relations with Afghanistan”. Meanwhile the Russian ambassador in Kabul said on Friday, “There was a bad regime which disappeared and people are hopeful. They say it can’t be worse so it should be better.” Both China and Russia benefit from the defeat of America but at the same time fear that Afghanistan may become a base for jihad against them also. China continues to forcibly occupy East Turkestan, while Russia continues to dominate the countries of Central Asia, which had previously been occupied by the Soviet Union. America is also seeking to draw in China and Russia, in order to provide added control against any resurgence of Islam, and also to increase the rivalry of China and Russia towards each other. America will continue to be powerfully assisted in its interference in this region through Pakistan, which continues to work in subordination to US foreign policy. It is Pakistan that enabled the US to enter Afghanistan in the first place, and it is Pakistan that enabled the US to exit through bringing immense pressure to bear upon the Taliban leadership to force them to begin negotiations with the US. It was pressure from Pakistan, at American direction, that forced the Taliban to restrain themselves from entering Kabul victoriously, seeking instead a ‘political settlement’ with elements of the previous failed puppet regime. On Tuesday, Pakistani Prime Minister Imran Khan and Army Chief Qamar Javed Bajwa reassured a visiting delegation of leaders from the previous Afghan regime, arriving on the same day that the Taliban took Kabul, that Pakistan would do everything for an “inclusive settlement”. The issue of Afghanistan will not be fully solved while Pakistan continues to execute the American agenda. The Muslims of Pakistan must arise and overthrow their agent rulers and legacy British colonial systems and establish in their place the nucleus of the Islamic Khilafah that shall join to it the lands of Afghanistan and Central Asia, liberate East Turkestan and Kashmir, and extend to all of the rest of the Muslim world, providing a single general leadership for the entire Muslim Ummah.