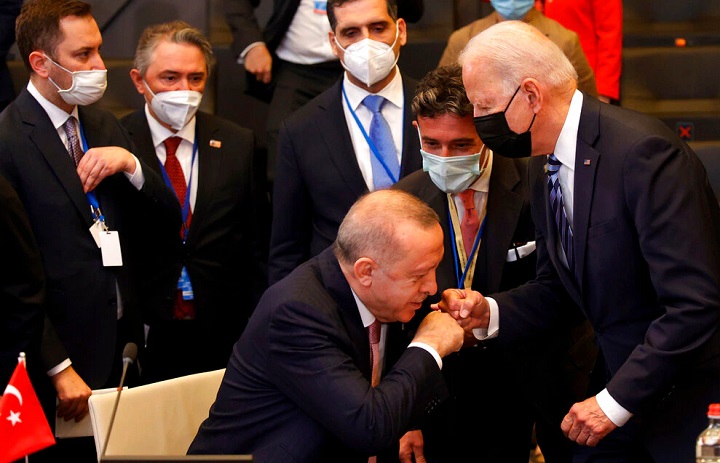 Biden Pushes West Against China While Reconnecting with Russia

US President Joe Biden concluded his first foreign tour of Europe this week that included a summit meeting of the G-7 countries, a NATO summit meeting and finally a US-Russia summit, all of which confirmed the continuation of US foreign policy despite Biden’s attempt to portray himself as taking a different approach from his predecessor President Donald Trump. Biden called for China to be considered a serious threat to the West. An article in the Washington Post under Biden’s name setting out his agenda for the visit said that “the United States must lead the world from a position of strength”, including confronting the “harmful activities of the governments of Russia and China”. However, key European countries, could be seen resisting this American drive, with German Chancellor Angela Merkel saying, “It is the claim of the G-7 to have a positive agenda for many countries in the world, which still need to catch up” and French President Emmanuel Macron saying, “G-7 is not a group that is hostile to China.” At the same time, Biden’s summit meeting with Putin was clearly an attempt to improve America’s working relationship with Russia, a country that America increasingly depends upon in many of its conflicts; America publicly attacks Russia only to drive other Western countries away from themselves building better relations with the Russian government, due to the intense rivalry between Western powers. In his meeting with Putin, Biden flattered him by referring to both their countries as “two great powers” in marked contrast to former President Obama who had characterised Russia as only a “regional power”.

Both these positions, towards China and towards Russia, are identical to the basis of Trump’s foreign policy. They are also a continuation of the foreign policy of presidents before Trump. It was President Obama who first called for the “pivot to Asia”, by which he clearly meant China. Even Obama’s degrading description of Russia was intended actually to calm Western public opinion after Russia captured Crimea and intervened in Ukraine. In reality, American presidents have very little scope for independent thinking in foreign policy, particularly at the beginning of their terms; foreign policy, in its thought and method, is ideologically driven, while in means and styles is largely fixed by the American establishment in accordance with long-term trends that generally see little change from administration to administration. Individual presidents differ mostly only in the manner of execution of the foreign policy handed down to them. Meanwhile, European powers do not want to become a tool in America’s conflict with China, each of them preoccupied with their own narrow interests rather than the interest of the West as a whole.

It is incumbent upon Muslims to closely follow developments in international relations; it is the deep divisions between the Western powers that provides the political space for the emergence of the righteous Islamic Khilafah (Caliphate) State on the method of the Prophet (saw), unifying Muslim lands, liberating occupied territories, restoring the Islamic Shari’a and way of life and carrying the call for Islam to the rest of the world, a state that shall, almost from its inception, join the ranks of the great powers on account of its immense size, population, resources, position and ideology.

Also, on the sidelines of the NATO summit, Biden held a separate meeting with Turkish President Recep Tayyip Erdogan, who renewed his loyalty to America under its new president. Speaking to reporters in advance of the meeting at Istanbul airport before leaving for Brussels, Erdogan said, “America is preparing to leave Afghanistan soon and from the moment they leave, the only reliable country to maintain the process over there is obviously Turkey.” American National Security Adviser Jake Sullivan told reporters after the meeting, “The clear commitment from the leaders was established that Turkey would play a lead role in securing Hamid Karzai International Airport and we are now working through how to execute to get to that.” It is the agent ruling class within Muslim countries that continues to protect Western interests in our lands. The West have only been able to enter our lands with the support and cooperation of our own rulers, who owe their loyalty to the West. But with Allah’s permission, the Muslim Ummah shall soon arise and overthrow these rulers, replacing them with a general leadership for all Muslims whose loyalty shall be to Islam and to the Muslim Ummah.

According to reporting this week by the Wall Street Journal, the US Pentagon is pulling missile defence systems and other military hardware and personnel from Saudi Arabia and other countries in the Middle East. We do not underestimate the Western countries as great powers or formidable military adversaries. But at the same time, we must be realistic regarding their very limited ability to project power into the heart of the Muslim Ummah, particularly at this time when America is confronting the more immediate threat of China and its encroachment into the Pacific Ocean which America considers its own private waters and a part of its core strategic interests, in addition to substantial Chinese rivalry in technology and even in space. CNN quoted a Pentagon spokesman as saying in the previous week, “These initiatives, some of which will remain classified, are designed to focus departmental processes and procedures and better help department leaders contribute to whole of government efforts to address the challenge of China.”

As Lebanon’s economic crisis continues, Army Chief Joseph Aoun addressed a virtual meeting of world powers organised by France this week in order to beg for funds for his soldiers, saying in a video published on the army’s twitter account, “How can a soldier support a family with a salary that does not exceed $90.” Aljazeera further reports him as saying, “The situation is critical. If unmitigated, the economic and financial crisis will inevitably lead to the collapse of all state institutions including the Lebanese Armed Forces (LAF)”.

The Muslim Ummah is the richest in the world in terms of resources and population but its wealth has been drained from it by the imperialist Western powers, whose weak domestic resources and failing economics forces them to exploit the rest of the world. The real solution to our economic difficulties is not to beg from the West but to reject the West, and use our own immense resources and population to rebuild our economies and our finances. For over a thousand years, Muslim lands were the most prosperous on the planet and, indeed, extended their prosperity to the rest of the world also, because of Islam’s open economic policies and fair trade. Islam built and exported prosperity while the West has built and exported only poverty.