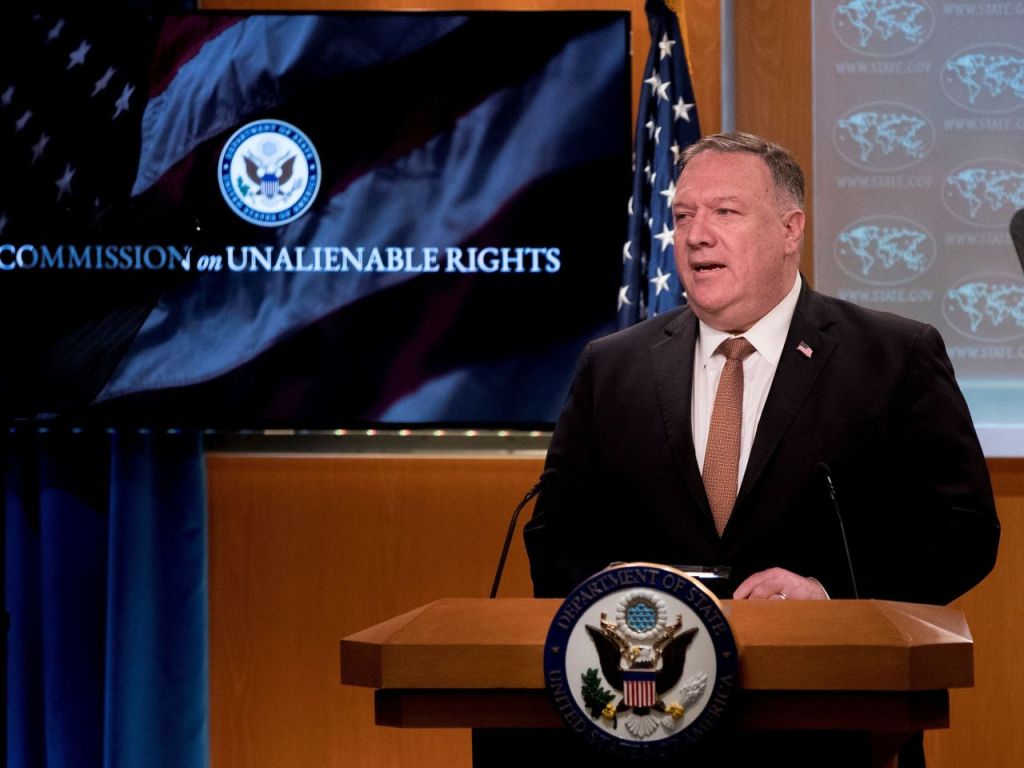 According to The New York Times:

Secretary of State Mike Pompeo delivered a divisive speech on Thursday calling for the United States to ground its human rights policy more prominently in religious liberty and property rights.

Mr. Pompeo’s speech, at the National Constitution Center in Philadelphia, came as he announced the release of a report created by a panel he commissioned last year to suggest how American human rights policy could better reflect the “nation’s founding principles.”

“It’s important for every American, and for every American diplomat, to recognize how our founders understood unalienable rights,” Mr. Pompeo said. “Foremost among these rights are property rights and religious liberty.”

Human rights scholars have criticized Mr. Pompeo’s panel since its inception, noting it was filled with conservatives who were intent on promoting views against abortion and marriage equality. Critics also warned that it sidestepped the State Department’s internal bureau responsible for promoting human rights abroad.

Experts have said that Mr. Pompeo’s efforts to prioritize religion in particular above other ideals in American diplomacy could reverse the country’s longstanding belief that “all rights are created equal” and embolden countries that persecute same-sex couples or deny women access to reproductive health services for religious reasons.

Western thought is devoid of any sound or definitive basis for solutions to life’s affairs, leaving the West unable to reach agreement on even very basic ideas. Allah (swt) says: أَلَا إِنَّ لِلَّـهِ مَن فِي السَّمَاوَاتِ وَمَن فِي الْأَرْضِ وَمَا يَتَّبِعُ الَّذِينَ يَدْعُونَ مِن دُونِ اللَّـهِ شُرَكَاءَ إِن يَتَّبِعُونَ إِلَّا الظَّنَّ وَإِنْ هُمْ إِلَّا يَخْرُصُونَ “Unquestionably, to Allah belongs whoever is in the heavens and whoever is on the earth. And those who invoke other than Allah do not [actually] follow [His] “partners.” They follow not except assumption, and they are not but falsifying” [Yunus: 66].

Turkey has been providing military aid to the United Nations-recognised government in the Libya conflict, while Egypt, the UAE and Russia have backed its foes in a rival administration based in the east.

Recent weeks have seen dramatic military advances by the Tripoli-based Government of National Accord (GNA), which drove back forces of the eastern renegade military commander Khalifa Haftar who had launched an assault on Tripoli last year.

Eastern-based legislators called this week for Egypt to intervene in the conflict. El-Sisi met Libyan tribesmen on Thursday and said Egypt would not stand idle in the face of a direct threat to Egyptian and Libyan security.

Asked about the possibility of Egyptian intervention, Erdogan said on Friday Turkey would maintain its support for the GNA.

“Steps taken by Egypt here, especially their siding with the putschist Haftar, show they are in an illegal process,” he said. He also described the approach of the UAE as “piratical”.

America has attempted for almost a decade to exploit the fall of Qaddafi to seize control of Libya from the British, who had in fact been fully backing the Qaddafi regime and benefitting immensely from Libya’s oil and its geostrategic importance. But with the failure of the American agent to consolidate control of Libya, America is engaged in a new initiative that copies the American plan for Syria, engaging American agents on both sides of the conflict. Phase one of this plan is now complete, with Turkey dominating the western part of Libya. Now there are calls for Egypt to intervene in the east, setting up a stalemate that America will then be able to settle at the negotiating table between both powers.

With Allah’s permission, the Muslim Ummah shall soon overthrow this agent class of rulers that serves only their Western masters, sacrificing the interests of Muslims to advance the interests of the foreign imperialist disbelievers.

Contrary to popular belief, Khamenei is not a ‘hardliner’. But nor is he a ‘moderate’. He in fact chooses which side to support at any time based on pragmatic political calculations. According to al-Monitor:

A televised address by Iran’s Supreme Leader Ayatollah Ali Khamenei to the country’s new parliament July 12 covered a wide range of topics from foreign policy and the domestic economy to the coronavirus pandemic. But what grabbed the most media attention was his rejection of a plan by some lawmakers to impeach President Hassan Rouhani. “The closing year of any administration is usually the most sensitive one. … I do strongly believe that administrations should work hard to the very end of their tenure and fulfill their responsibilities,” Khamenei said.

For weeks, hard-line parliamentarians had been lobbying and collecting signatures to “bring down” the president before his second term came to an end. The project was shut down with a simple statement by the supreme leader that he did not find the impeachment effort to be in the best interest of the country.

Two days after the supreme leader’s speech, one of the dogged architects of the impeachment bid, Javad Nikbin reversed his previous confrontational stance, announcing that the motion “is no longer on our agenda.” The ultraconservative cleric from the Paydari Movement — the parliament’s most hard-line and anti-Rouhani faction — noted, however, “We still need close oversight of the government’s performance.”

Member of the Parliament’s National Security and Foreign Policy Commission Ebrahim Rezaee said though it is the lawmakers’ legitimate authority to impeach the president, doing so “is not helpful under the current circumstances.” Another conservative lawmaker, Reza Taghipour, said he feared impeachment could do “more harm than good.”

“After that speech, we will no longer pursue the impeachment,” said lawmaker Ahmad Hossein Fallahi. Still, the parliamentarians have vowed to press ahead with summoning the president and are expected to grill him over his handling of Iran’s crumbling economy.

The American approach to Iran has been the same. Sometimes the Americans have backed the moderate faction, which largely controls the state apparatus, and sometimes America has backed the hard-line faction, dominant in the Revolutionary Guards, thus playing one faction against the other. It is the Khomeini revolution that laid the basis for both factions. In Khomeini’s public pronouncements, he appeared hard-line, while in his private dealings, including with America, he appeared moderate.

The presence of factions is a typical symptom of the implementation of the democratic system, which Khomeini chose to adopt from the West, in spite of significant political work done by Iranian scholars exposing the fallacy of Western systems and their contradiction with Islam. Iran will continue to suffer the problem of factions, and will continue to be manipulated by the West, until it commits itself to implementing Islam alone.