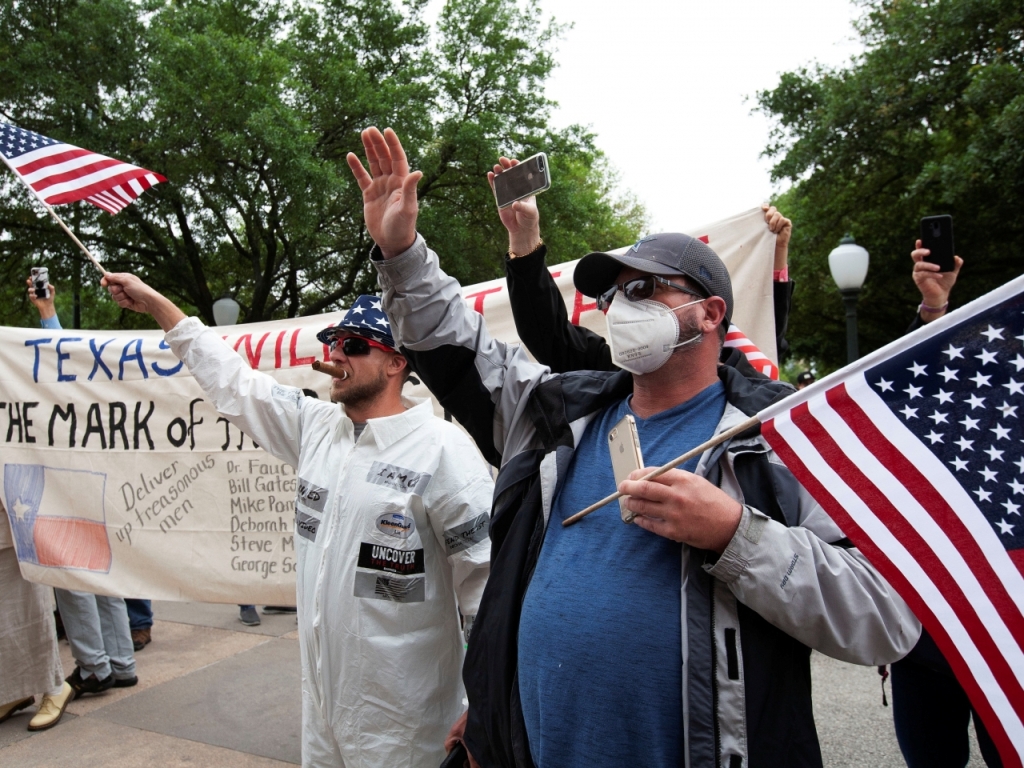 US Lifting of the Lockdown Domestic Partisan Politics Not Medical Opinion

The West’s imposition of a lockdown was a Western political necessity much more than medical opinion. Now the lifting of the lockdown has also become a domestic political issue. According to the New York Times:

President Trump on Friday openly encouraged right-wing protests of social distancing restrictions in states with stay-at-home orders, a day after announcing guidelines for how the nation’s governors should carry out an orderly reopening of their communities on their own timetables.

In a series of all-caps tweets that started two minutes after a Fox News report on the protesters, the president declared, “LIBERATE MICHIGAN!” and “LIBERATE MINNESOTA!” — two states whose Democratic governors have imposed strict social distancing restrictions. He also lashed out at Virginia, where the state’s Democratic governor and legislature have pushed for strict gun control measures, saying: “LIBERATE VIRGINIA, and save your great 2nd Amendment. It is under siege!”

His stark departure from the more bipartisan tone of his announcement on Thursday night suggested Mr. Trump was ceding any semblance of national leadership on the pandemic, and choosing instead to divide the country by playing to his political base.

The Western democratic system, by subjecting the head of government to elections every four or five years forces rulers to think like partisan opposition politicians instead of as leaders of their nations. Islam is able to have rulers elected for life because it provides a far superior form of accountability, the divine and immutable Shar’i law, known to even the ordinary people that provides a fixed basis and detailed reference for monitoring and controlling government.

The illegal Jewish entity, despite being of very small size continues to struggle with its electoral system, partly because they have chosen to implement a more extreme form of democracy that results in a very large number of smaller parties reaching the parliament. According to the BBC:

Israel is facing the growing prospect of an unprecedented fourth election in just over a year after a deadline to form a government expired.

Its president passed the mandate to parliament after centre-left bloc leader Benny Gantz failed to seal talks to form a unity government in time.

If no-one else gets nominated within 21 days, new elections will be held by 4 August.

Israel has been in a political crisis after three inconclusive rounds.

Although Prime Minister Benjamin Netanyahu’s right-wing Likud party won more seats than Mr Gantz’s Blue and White in the most recent elections, Mr Gantz was backed by a thin majority of lawmakers and given the mandate to form a government.

However, Mr Gantz, former chief of staff of the Israeli defence forces, struggled to put together a governing coalition and, with the country in the grip of the coronavirus crisis, agreed to national unity talks with Mr Netanyahu.

Despite days of on-off negotiations, the two sides have been unable to strike a deal, although a joint statement said talks would continue.

Democracy is an illusory and fantastical idea that is never fully practiced. Even in the illegal Jewish entity, it is not the ordinary people that decide the policies but a small elite that remain firmly committed Zionists, imposing this view on politics, the media and public opinion in general, falsely connecting Zionism with the survival of the Jewish people. It is this elite that wants Netanyahu to succeed because of his boastful arrogant hatred for Muslims but at the same time want him to remain weak and vulnerable to their demands. The Jewish people shall never enjoy security and justice until they return to live under the shade of Islamic rule that protected them and their religion for more than a millennium. With Allah’s permission the re-established Islamic Khilafah (Caliphate) State on the method of the Prophet ﷺ shall unify Muslim lands, liberate the occupied territories, eliminate the illegal Zionist entity and return all humankind to peace and prosperity.

The global economic order created by the Western disbelieving Capitalist imperial states has connected the countries of the world to the West instead of to each other, so that economic slowdown in the West has a dramatic impact on economies around the world. It is the purpose of the IMF to ensure that this order keeps functioning when under stress. According to Reuters:

The International Monetary Fund is looking to triple its concessional financing for the poorest countries to over $18 billion to help them respond to the novel coronavirus pandemic, Managing Director Kristalina Georgieva said on Wednesday.

“We have full support of the membership to go on the offensive to raise more capacity for concessional funding from the IMF. Our target is to triple what we do for those countries,” she told a news briefing held by videoconference.

Concessional loans generally offer terms that are favorable to those available on the market.

Earlier, Georgieva issued a statement to a G20 finance ministers and central bank governors meeting, saying the Fund was “urgently seeking $18 billion in new loan resources for the Poverty Reduction and Growth Trust, and would also likely need at least $1.8 billion in subsidy resources.”

Georgieva underscored the unprecedented nature of the crisis, noting that 102 of the IMF’s 189 member countries had expressed interest in or formally requested assistance from the Fund to battle the disease. She has urged donor countries to step up and help emerging markets and developing economies that will hit hardest by the crisis.

Late on Wednesday, she said the Fund’s Executive Board had approved creation of a short-term liquidity line, a revolving and renewable backstop for member countries with very strong policies and fundamentals.

The new instrument, first proposed but not finalized in 2015, allows certain countries revolving access of up to 145% of their quota to cover short-term balance-of-payments needs, which could prove helpful in the current crisis.

IMF funding has nothing to do with poverty alleviation. It is only to forestall a collapse of third world governments so that the West can continue to benefit from the wealth and resources that those countries are prevented from using for themselves.

With Allah’s permission the re-established Islamic Khilafah (Caliphate) State on the method of the Prophet ﷺ shall eject the machinations of the Western disbelieving imperialists not just from Muslim lands but from the world as a whole, returning all of humanity to the peace and prosperity that existed before Western imperialism began.