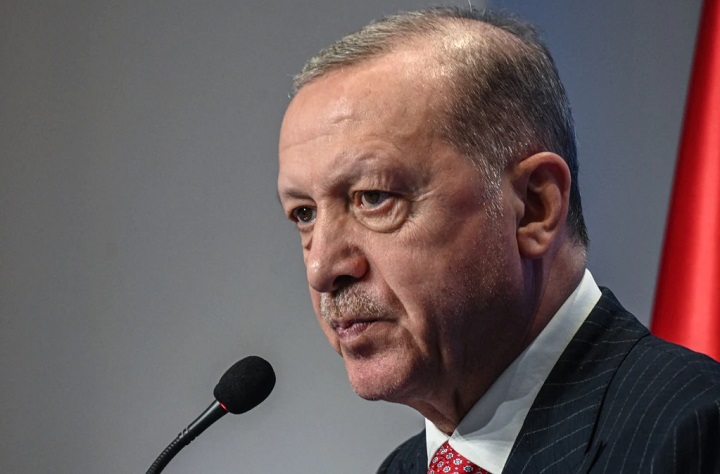 Turkish President Recep Tayyip Erdogan said Ankara will not approve Sweden and Finland’s bid for NATO membership over the Nordic countries’ alleged support for the PKK, a Kurdish group Turkey considers to be a terrorist organization. Sweden and Finland also have imposed a ban on arms exports to Turkey over Erdogan’s offensive in northeast Syria in 2019. Sweden said Swedish and Finnish officials planned to travel to Ankara to discuss Turkey’s concerns, but Erdogan said they shouldn’t bother. “They are coming to Turkey on Monday. Are they coming to convince us? Excuse me but they should not tire themselves,” he said.

Turkey is demanding both countries end their arms embargoes on Turkey over its military intervention against the Kurds in northeast Syria. Turkey’s Foreign Minister Mevlut Cavusoglu said that progress was being made with Finland on the issue but that Sweden was continuing to be “provocative.” “Ankara’s statements do raise concern in Sweden, as they come at a time when the [ruling] Social Democrats have just taken a very difficult decision to change position on the question of NATO membership,” noted Paul Levin, director of Stockholm University’s Institute for Turkish Studies. Turkey’s demands of the Swedish government “hits right at the reason many on the left have been uneasy over NATO membership — the fear that Sweden would lose its voice on matters concerning human rights and democracy. There is a great deal of sympathy for the Kurdish cause, especially on the left, and I think it will be difficult [for Sweden] to make any meaningful concessions.” And with elections looming in Turkey and Sweden alike, “There is a risk that a mutual inability to be seen as backing down could make for a difficult road ahead,” Levin added.

This is not the first time that Erdogan is playing hardball with NATO. In 2009, Turkey withdrew its objections to the nomination of Anders Fogh Rasmussen, a former Danish prime minister, to lead the alliance only after the last-minute intervention by then-President Barack Obama. Turkey was opposed to Rasmussen because of his defense of free speech in the midst of the Danish cartoons crisis over depictions of the Prophet (saw). In 2019, Turkey held up defense plans for the Baltic states and Poland, insisting that NATO needed to recognize the YPG as a terrorist threat and defend Turkey against it. “It took some bureaucratic chicanery to get that one through. Erdogan has elevated its own security issues over those of the collective security of the alliance.

The US Senate voted to advance the nearly $40 billion aid package for Ukraine. This massive giveaway to Ukraine equals nearly the entire yearly budget of the US State Department and is larger than the budget of the Department of Homeland Security. But Sen. Rand Paul proposed an amendment in the final bill that allows for the Inspector General to oversee how funds are spent. He wanted at least a bit of oversight on the nearly $50 billion in total that Washington has sent to what Transparency International deems one of the most corrupt countries on earth. The Special Inspector General for Afghanistan Reconstruction (SIGAR) was an endless thorn in Washington’s side, because he reported on the billions of dollars that were stolen in Afghanistan. In its final report on the 20 year Afghanistan war, SIGAR reviewed approximately $63 billion of the total $134 billion appropriated to Afghanistan and found that nearly $19 billion of the amount was lost to waste, fraud, and abuse. Nearly one third of the funds they reviewed were outright wasted or stolen by corrupt Afghan officials. The US is spending billions on the war in Ukraine in order to bleed Russia to death. Russia thought it was getting into an easy war but it’s now dragged on for nearly 3 months.

Russia on the Verge of Victory in First Major City

Russia is nearing a major victory in Ukraine as the Southern port city of Mariupol is on the verge of falling. After nearly three months of fighting Commanders of units stationed at the city’s massive Azovstal steelworks plant have been ordered “to save the lives of their personnel,” the statement by the General Staff of the Armed Forces of Ukraine added. Hundreds of people were evacuated on Monday from the steel plant, the last holdout in a city that had become a symbol of Ukrainian resistance under relentless Russian bombardment. Mariupol, a port city on the Sea of Azov, has been the scene of some of the most intense fighting in Ukraine since Russia launched its invasion in late February. After Russian poor performance in the war it resorted to brute force to bring the city under control. It did this by destroying 80% of the city’s infrastructure, some of it beyond repair. The city has been without water, electricity and heating for weeks. The fall of Mariupol would be an economic blow to Ukraine and a symbolic victory for Russia. “Mariupol has a practical and symbolic significance for Russia,” Andrii Ianitskyi, the head of the centre for excellence in economic journalism at Kyiv School of Economics, told the Guardian. “It is a large port city and a base for Ukrainian armed forces. So if Russians want to have a land corridor [from the Donbas] to Crimea, they need to control the city.”