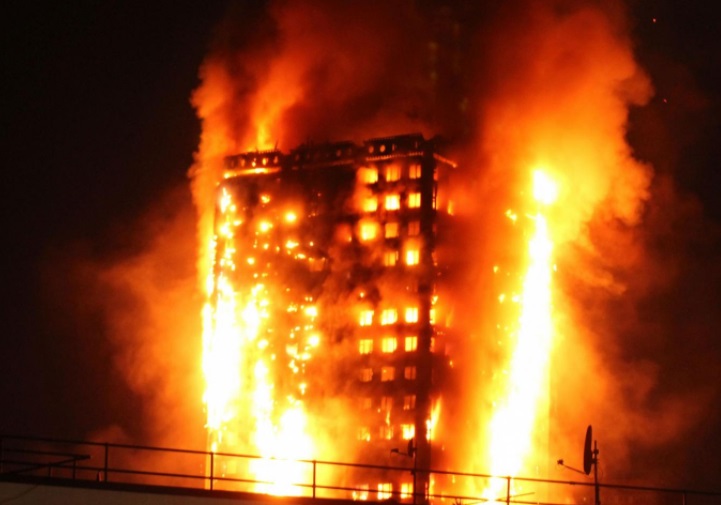 Grenfell Tower Fire: Muslims Awake for Ramadan Among Heroes who Helped Save Lives

Heroic residents of the Grenfell Tower saved their neighbours by banging on their doors and guiding them to safety, it has emerged. Local community centres and religious buildings have opened to help those who have lost their homes, and left with nothing but their pyjamas. Some put their own lives at risk to rescue others. Rashida, a local resident, told Sky News how Muslims observing Ramadan may have saved lives in the tower block, as many of them were awake. She said: “Most Muslims now observing Ramadan will normally not go to bed until about 2am, maybe 2.30am, [when] they have their late night last meal. They do their last prayer. “So most of the families around here would have been awake and I think even with the noise of the helicopters, it would have brought a lot of attention to a lot of residents, non-Muslim as well, [who] would have thought ‘something’s going on that’s not quite normal.'” She spoke of how tight-knit the community was, and how many different nationalities lived in the tower. She said: “It’s a very diverse area, we have all nationalities, all religions. We all live peacefully amongst each other, there is not much crime – [not] higher than anywhere else. You can walk around safely late at night… we all know each other. There is a very high population of Moroccans, and for some reason we all live close to each other. Everyone knows each other.” [Source: Daily Telegraph]

Pentagon Chief Jim Mattis on Tuesday warned lawmakers that the Taliban is surging in Afghanistan, and said America is “not winning” in the country. The “Taliban had a good year last year, they are trying to have a good one this year,” Mattis told the Senate Armed Services Committee. “Right now I believe the enemy is surging.” Lawmakers repeatedly asked Mattis for an update on Afghanistan and sought reassurance that America would be able to effectively help Afghan partners reverse a stalemate against the resurgent Taliban. Mattis said he expected to present a revised strategy by mid-July. He is believed to be mulling sending an additional 3,000 to 5,000 US troops. “We are not winning in Afghanistan right now. We will correct this as soon as possible,” he said. The Afghan conflict is the longest in American history, with US-led NATO troops at war there since 2001, after the ousting of the Taliban regime. The ongoing security crisis has seen not just the Taliban gain ground, but also the emergence of other groups such as a local Daesh affiliate. Meanwhile, Afghan President Ashraf Ghani’s office said in statement on Monday that China has expressed a desire to take on a role as mediator between Pakistan and Afghanistan. “China’s Foreign Minister Wang Yi is scheduled to visit Kabul soon where he will meet Afghan officials to discuss ways to improve Afghanistan-Pakistan relations” the statement said.  It added that the Chinese foreign minister would work to discuss the possibility of setting up a meeting between the four members of the Quadrilateral Coordination Committee — Afghanistan, Pakistan, US and China. The four-nation group was formed in January 2016 for reconciliation in Afghanistan through the direct peace talks between the Taliban and the Afghan government. “It is the first time that China wants to be a mediator in Afghanistan’s peace process and soon the Chinese Foreign Minister will visit Kabul. Peace with Pakistan was our demand and this must be solved between government and government,” Ghani said, according to the statement. [Source: Pakistan Observer]

America has been waging war in Afghanistan since 2001, and it has never looked like a winner. One possible explanation for this is that America wants to maintain a state of chaos and instability in Afghanistan to justify American occupation and use the country as base to launch attacks against Iran, China, Russia and Pakistan.

Muslim children in China’s far western Xinjiang region are being forced to change their “religious” names and adults are being coerced into attending rallies showing devotion to the officially atheist Communist party. During Ramadan, the authorities in Xinjiang have ordered all children under 16 to change names where police have determined they are “overly religious”. As many as 15 names have been banned, including Islam, Quran, Mecca, Jihad, Imam, Saddam, Hajj, Medina and Arafat, according to Radio Free Asia. In April authorities banned certain names for newborns that were deemed to have religious connotations, but the new order expands forced name changes to anyone under 16, the age at which Chinese citizens are issued a national identity card. The order coincided with millions gathering at 50,000 individual rallies across Xinjiang this week to pledge allegiance to the Communist party. More than a quarter of the region’s population sang the national anthem at 9am on 29 May and pledged allegiance to the Communist party, according to state media reports. Xinjiang’s Muslims mostly belonging to the Uighur ethnic group, a Turkic people. The region has occasionally seen sporadic violence which China blames on international terrorist groups. But overseas observers say the vast majority of incidents are a result of local grievances. “Terrorists are the scum of the Uighur people, they are the common enemies of the people of all ethnic groups,” said a Communist party cadre leading one of the rallies in Urumqi, the capital of Xinjiang. “We must treat the enemy harshly and brush away the old to make a clean sweep, we should raise our swords high and in no way be lenient.” State media accounts of the mass rallies gave no indication as to a reason for the sudden display of patriotism. Photos of some rallies showed paramilitary troops in full body armour armed with assault rifles attending the ceremony. “Fundamentally these rallies are just a show of force, and part of the audience is the Han Chinese population in Xinjiang, to show the power of the state,” said Michael Clarke, a political science professor at the Australian National University and expert on Xinjiang. “But in terms of the Uighur population, it’s difficult to see how these kinds of mass rallies will win the hearts and minds over average Uighurs, and will likely do quite the opposite.” Human rights groups accuse China of restricting Uighurs’ freedom of religion and expression and authorities routinely deny passports to members of the ethnic group. The government has also encourages mass migration by Han Chinese to the area and they now make up roughly 45% of the population. Xinjiang has seen an increasingly invasive security state since president Xi Jinping came to power in 2012, Clarke added, including hiring thousands of police. The region is at the centre of Xi’s Belt and Road initiative, a $900bn development aimed at building closer ties within Asia and beyond by constructing large-scale infrastructure. [Source: The Guardian].

Despite China’s overt crackdown against Chinese Muslims, several Muslim countries continue to welcome Chinese investment and money. A country like Pakistan sees no harm in accepting Chinese money, while Beijing continues to oppress indigenous Muslim Chinese.