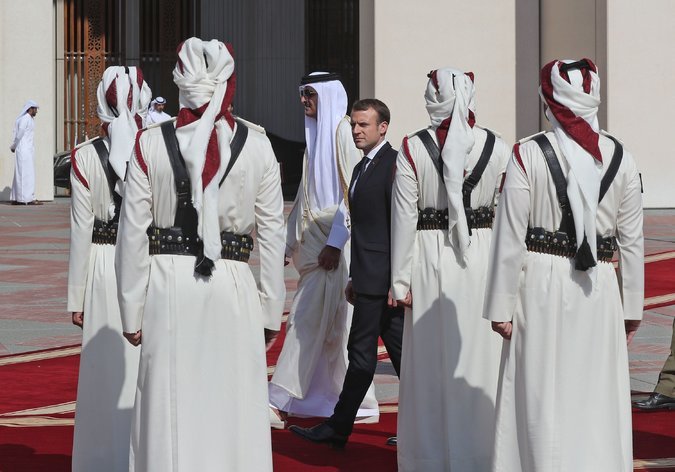 Macron under Fire over Plans to Reform Islam in France

Mr Macron has announced he is working on structuring Islam in France in a bid to preserve national cohesion and rediscover the true meaning of “laïcité”. France’s strict brand of secularism – the legal separation of religious and civic life –, also known as laïcité, is based on three key principles: freedom of conscience, a strict separation between church and state and the freedom to practice any faith. But the French president’s plans to reform Islam in France “call into question” the 1905 law separating church and state, a spokesperson for France’s far-left Parti de Gauche (PG) party said on Monday. Mr Macron told the French weekly Le Journal du Dimanche that he was working on reforming Islam in France in an effort to reduce the influence of Arab countries, fight extremism, better explain Islam and preserve national cohesion. He said: “My goal is to rediscover what lies at the heart of laïcité.” Laïcité was formalised in the 1905 law, which explicitly states that the French republic “neither recognises, nor salaries, nor subsidises any religion”. Mr Macron’s reform plans were slammed by core members of the hardline leftist party who argued that the centrist government would be jeopardising the state’s secular principles by meddling in the religious affairs of French Muslims. PG spokesperson Benoît Schenckenburger said in a statement: “The president’s plans to restructure Islam in France call into question the 1905 law separating church and state. “The state cannot influence the organisation of Islamic institutions, cannot meddle in the training of imams and cannot weigh in on how Islam in France is to be financed. “The proposed reforms would strip the state of its religious neutrality and would force it to take a stance on religious affairs.” France’s right-wing The Republicans party, for its part, welcomed the president’s proposal. Nadine Morano, conservative chief Laurent Wauquiez’s newly-appointed advisor, told France’s Europe 1 radio on Monday that the country has “a problem with Islam”. “Yes, we have a problem with Islam. The religion is being derailed by radical Islamists. We must bring down radical political Islam.” She added a reform of Islam in France as proposed by Mr Macron was “indispensable”. [Source: Daily Express]

The West has been trying to reform Islam since the time of the crusaders. No that Islam is resurgent on their own doorstep, Western politicians are clamoring to halt Islamic revival both at home and abroad.

A prominent Saudi cleric on Wednesday endorsed Valentine’s Day calling it a “positive social event” that was not linked to religion. The comment from Ahmed Qassim Al Ghamdi, former chief of the religious police in the holy city of Makkah, comes as 32-year-old Crown Prince Mohammed bin Salman pursues a far-reaching liberalisation drive that has upended years of conservative tradition. “It is a positive social event and congratulating people for it is not against sharia (law),” Ghamdi told Saudi-owned Al Arabiya television.  “It is an act of kindness to share greetings on Western national and social holidays, including Valentine’s Day, exchange red roses with others, as long as it is towards peaceful people who do not share animosity or are being at war with Muslims.” In recent years, Saudi Arabia launched a series of reforms. Prince Mohammed, who has vowed to return the country to “moderate Islam”, has further cut back the political role of clerics in a historic reordering of the Saudi state. Florists openly sold red roses and Valentine’s Day memorabilia in cities such as Jeddah on Wednesday. [Source: Khaleej Times]

The rapid pace of secularization of Saudi society under Mohammed bin Salman is opening the floodgate towards Western values and ideas. The Ulema that openly shunned the adoption of Western values in the past are now promoting such values without shame.

Is US Pressure Pushing Taliban toward Peace?

The Taliban have issued a letter seeking to end the brutal, protracted bloodshed in Afghanistan through dialogue. Experts say it is a reaction to increased US airstrikes against the group and pressure on Pakistan. In an unusual move, the Afghan Taliban issued a letter Wednesday addressing directly the “American people” and urging them to put pressure on their government to withdraw from conflict-stricken Afghanistan. The letter was addressed to “the American people, officials of independent non-governmental organizations and the peace loving Congressmen.” The insurgent group said they want to put an end to the seemingly unending war by engaging in dialogue. But the jihadists warned that they “cannot be subdued by force” and that their willingness to seek peace did not mean they were exhausted or their determination to fight had been sapped. In the letter, the Taliban once again justified the continuation of their armed campaign by presenting themselves as “the representatives of the will of Afghan nation” and reiterating that the “imposed government” in Kabul is corrupt and illegitimate. “This letter is a unique move by the Taliban. It is the first time the group has expressed its willingness to engage in peace talks and has called on the people of the United States to push their government to work on a mechanism for peace with the Taliban,” said Faiz Mohammad Zaland, a Kabul University lecturer and an expert on the Taliban. But the Afghan government dismissed the Taliban offer, saying that “they are the reason behind the continuation of war in Afghanistan.” “If the Taliban have true faith in peace, they should put an end to their fight and, like the Hezb-e-Islami [party] join the Afghan peace process,” Shah Hussain Murtazawi, spokesman for the Afghan President Ashraf Ghani, told DW. Hezb-e-Islami is the only Afghan militant outfit so far that laid down arms and joined mainstream politics. Observers in Afghanistan see the latest move by the Taliban as a reaction to increased US airstrikes against the group and pressure on Pakistan to take action against extremist outfits operating from its soil. “The Taliban are aiming to ease the pressure on Pakistan and buy time against the US airstrikes in Afghanistan,” Yonus Fakur, a Kabul-based political analyst, told DW. But Washington is unlikely to change its policy based on this letter alone, he said. “The US will only consider talking to the Taliban if it sees real change in the security situation on the ground.” [Source:  Deutsche Welle]

Clearly then, America’s pressure on Pakistan to bring the Taliban to the negotiating table is bearing fruit. However, the fact that America has to rely on Pakistan to press Taliban for dialogue demonstrates America’s weakness and Pakistan’s strength. Had the Pakistani leadership been sincere to their nation state, let alone Islam, they would have joined forces with Taliban to eject America from the region and put an end to the destabilization of Pakistan.