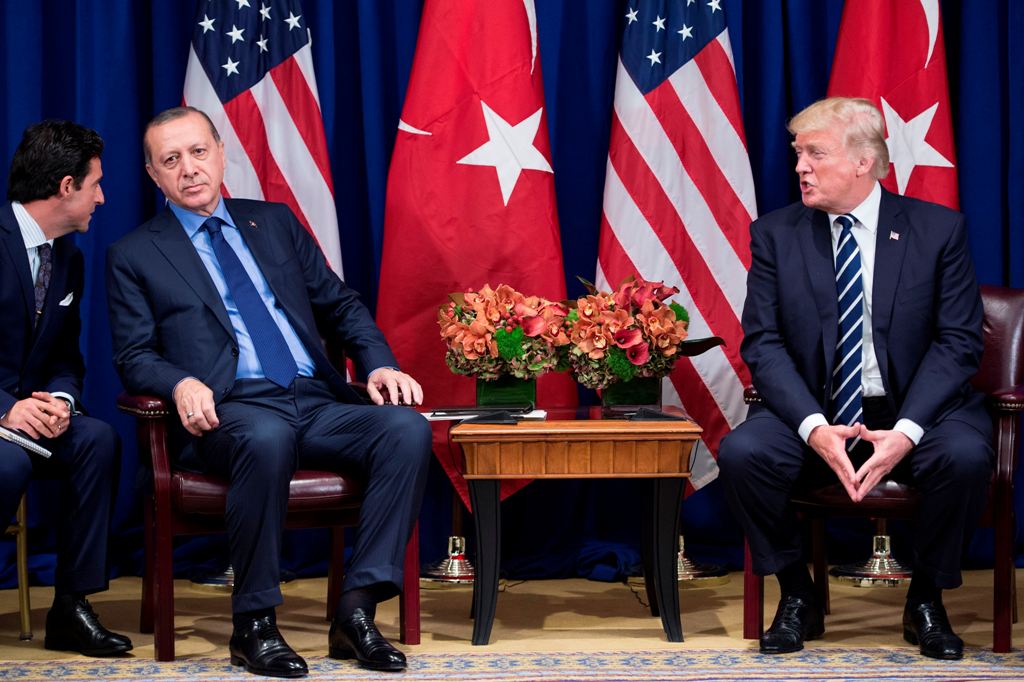 US to Sanction Tukey

The US announced new sanctions on Turkey, on 14 December 2020. But despite threatening Tukey for long about its purchase of Russia’s S-400 missile system, the sanctions turned out to be extremely narrow. The sanctions are on Turkey’s defence sector under the Countering America’s Adversaries Through Sanctions Act (CAATSA). They target Turkey’s Presidency of Defence Industries (SSB), including its Chief Ismail Demir and three other senior officials. They also do will not apply retrospectively and will only affect new deals. The sanctions will place a ban on US defence technology and equipment. There has bene a divide for time in the US on Erdogan and his growing clout. Some Congress representatives have for long felt Erdogan needs to be reined in, especially as he began searching for militray deals elsewhere. Whilst others see Erdogan playing a central role in US political plans as seen in Iraq, Suria, Libya and Azerbaijan. President Trump openly criticised Congress over the move and has for long defended Erdogan,

Morocco is now the latest country to establish relations with the Zionist entity, joining the UAE, Bahrain and Sudan. Part of the bribe in the case of Morocco was the US recognising Morocco’s claim to the Western Sahara. The US similarly removed Sudan from the international terrorist list after it was hoodwinked it into having open relations with the Jewish entity. The Muslim rulers for long saw the Muslims as Palestine as something that gave them legitimacy, now that that they no longer see Palestine in that way they are abandoning the Muslims of al Quds as the US makes them offers for the Dunya. It remains to be seen how the rulers navigate the public opinion amongst the Ummah who support the Muslims of the blessed land.

Even by his standards US president Donald Trump’s latest “peace” deal is among the strangest his administration has struck. In exchange for Morocco normalising diplomatic relations with Israel, the US will recognise Rabat’s claim to the disputed Western Sahara territory. In this quid-pro-quo arrangement are all the hallmarks of Mr Trump’s leadership style: an attempt to gratify his ego, the love for a deal whatever the long-term costs and an indifference to the damage the approach causes. The deal with Morocco, struck on Thursday, is just the latest in a string of agreements with Arab countries that have improved relations with Israel at the behest of the US government. All have been transactional: Sudan was removed from the list of states sponsors of terrorism, while the Trump administration gave the United Arab Emirates a green light to buy advanced US-made F-35 fighter jets. Morocco, for its part, has gained US recognition of its claim to the Western Sahara, a region whose status has been disputed since Spain, the former colonial power, withdrew in 1975. Today, control is contested between Morocco and the self-proclaimed Sahrawi Arab Democratic Republic, who want independence for the region. Tensions in the Western Sahara are already high. The Polisario Front, an Algerian-backed independence movement, has been taking potshots at the Moroccan troops who guard a 2,700km-long fortified sand wall in recent weeks. This followed an incursion by Moroccan troops into a demilitarised buffer zone to clear a highway linking north Africa to sub-Saharan Africa that was blocked by protesters. A UN resolution in 1991 which underpinned a near 30-year ceasefire called for the status of the territory to be decided by a referendum. The move by the US to recognise Morocco’s claim shatters that international consensus — the EU has said it will continue to treat the territory as disputed — and will embolden a Moroccan regime already accused of human rights violations in the territory. It risks further destabilising a region riven by conflicts in Mali and Libya, fertile recruiting grounds for Islamist terrorism. In this deal the long-term goals of US foreign policy appear to have been subordinated to Mr Trump’s desire to present himself as a peacemaker and master negotiator. He failed to broker a promised “deal of a century” to resolve the Palestinian-Israeli conflict but still aims to outdo his predecessor Barack Obama, who won a Nobel Peace Prize. On its own, the deal with Morocco would be irresponsible. As part of a strategy for achieving a satisfactory resolution to the Israel-Palestinian conflict it is absurd. Mr Trump’s strategy has been to deliver everything that one side could ask for and remove any leverage from the other — recognition of Jerusalem as the Israeli capital, acknowledgment of Israeli sovereignty over the occupied Golan Heights region and more normal relationships with the Arab world. This result is the relaxation of pressure on Israel to negotiate for a long-term solution. The Trump administration’s latest deal will not only fail to advance the cause of peace between Israel and the Palestinians. It may actually ignite a new conflict. Without the prospect of a referendum, the Polisario Front is likely to intensify its armed activities in the Western Sahara. Polisario may also receive increased assistance from its main sponsor — raising tensions between Morocco and Algeria. Rather than burnishing his credentials as a peacemaker in his last days in office, President Trump is in danger of priming a new round of instability. [Source: Financial Times]

While it may be that Trump has sought his own personal objectives above America’s national interest, however, Trump is leaving a Middle East that is more subservient to US power and easy to shape by the incoming Biden. The tragedy for the Muslim world is that without a sincere leadership it continues fumble in humiliation and cowardice.

China’s Treatment of the Uighurs: From Unthinkable to Irrefutable

What once seemed surely unthinkable has become, in just a few years, irrefutable. The evidence amassed by scholars, journalists and campaigners of grotesque human rights abuses in Xinjiang has begun to cut through to the wider public. On Thursday, the France and Barcelona forward Antoine Griezmann cut his commercial ties to the Chinese tech giant Huawei, saying there were “strong suspicions” that it has contributed to the repression of Uighurs. His statement followed a report that Huawei tested a facial recognition system developed by artificial intelligence firm Megvii that could be used to identify Uighurs and trigger an alert to their presence. (Huawei has said that its technologies are not designed to identify ethnic groups). In parallel, a rare leak of a prisoner list from a camp has shown how a government data programme has targeted Uighurs for detention simply for being young, using VPNs, or speaking to relatives abroad. These stories offer a truly chilling vision of a hi-tech surveillance society and give the lie to China’s claims that its actions in Xinjiang are focused on targeting terrorism and separatism, and do not treat a population as inherently suspect. The government initially denied the existence of mass detention camps – in which around a million people are thought to have been held without charge or trial – before saying that they were education centres for alleviating poverty and preventing extremism. More recently it said that people had been released. But analysis suggests a growing use of imprisonment, with not only individuals but families handed lengthy sentences, and of forced labour. Other Uighurs live under the surveillance of officials sent to stay in their homes, as well as omnipresent security cameras. Now outsiders are paying attention. A year ago, Heiko Maas, the German foreign minister, suggested that firms were starting to ask themselves how appropriate their investment in the region was, because “no company can ignore the fact that hundreds of thousands of Uighurs are being held in camps”. The National Basketball Association severed links with a training centre in Xinjiang this summer. The region’s cotton exports, thought to account for around a fifth of the world’s supply, are also in the spotlight given the growing concerns about forced labour. H&M no longer sources products from the region. The Trump administration has banned cotton exports from the XPCC, part of the Chinese state and one of the country’s largest producers. Yet when Mesut Özil spoke out about the treatment of the Uighurs last year, Arsenal distanced the club from his remarks. Last month, Volkswagen defended its Xinjiang plant, saying there is no forced labour there. And the New York Times has reported that companies including Nike and Coca-Cola have pressed the US Congress to water down the Uyghur Forced Labour Prevention Act. Lobbyists say that, while they oppose human rights abuses, they fear the stringent legislation could cause unforeseen problems, in part because of the opacity of Chinese supply chains. Beijing believes that what happens in Xinjiang is nothing to do with foreigners. But China’s economic might has made its business everyone’s business. [Source: The Guardian]

China’s subjugation of Muslims is a combination of fear and support from the rulers of the Muslim world. The latter have proved to be indispensable assets for foreign powers including China to oppress Muslims worldwide. Only the Khilafah Rashidah (rightly guided Caliphate) upon the method of the Prophethood can lift the Ummah from such miserable conditions.

Turkish actor Engin Altan Duzyatan, who received hero’s welcome in Pakistan, has thanked his Pakistani fans for the warm welcome. Taking to Instagram, Engin Altan, who portrays the titular role in historical drama series Dirilis: Ertugrul, shared bouquet of flowers, he received upon his arrival, in his story and wrote, “Thank you for warm welcome to Pakistan.” He arrived in Pakistan upon invitation of a private business company on Thursday. The photos and videos of Engin Altan are circulating on social media, where the actor can be seen receiving love and hero’s welcome from the officials and fans. [Source: Geo News]

It is unfortunate that many Pakistanis are unable to see that the real success behind the Ertugrul drama is the power of the Ottoman State that dominated world affairs for centuries. If Pakistanis yearn for those glory days to return from the TV screens to real life then they must work to re-establish the Khilafah state—where entertainment will be reels of live Jihad and Islamic diplomacy and victory across the globe.